Chivalry: Medieval Warfare has now released CU1 Patch 2! This was a month and a half long process of updating and testing on our beta app, so we're happy to finally get this released to the live game. 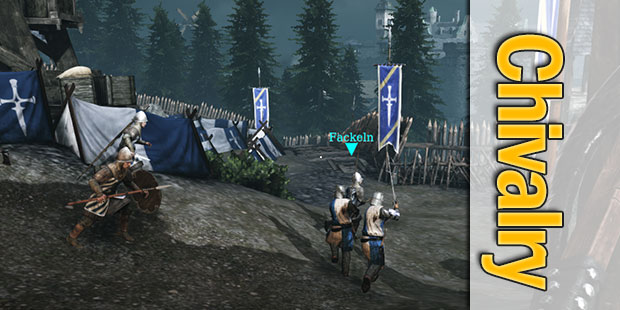 Flinch not applying during weapon swap (will apply AFTER you swap weapons).
Counterattacks made off of feinted alt-swings transitioning into alt-swings.
Kick stun applying during shield drop rather than only active block.
Release flinch desyncing near the end of release.
Shields being able to exploit tap block to bypass deflected/parried state.
Projectile stickies not showing.
Pole Hammer sprint attack not moving you forward.
Several ballistae bugs.
Assists not being awarded properly.
Alt slash tracers for fist firing upwards.
Projectile speed being influenced by framerate.
Alt swing infinite combo.
King instantly respawning after death.
Random class assigning players to classes over the max amout on class-limited servers.
Vertical turn rate being uncapped in a windup or combo.
Tapping shield block when out of stamina not applying special daze properly.
Sling sometimes firing at minimum windup when the attack button is being held down.
Javelin and flail shield punch attacks using weird tracers.
Sprint causing you to slide forward during dodge and reload animations.
Light crossbow becoming unable to fire.
Rank limits not working for rank 0.
Removed some potentially abusive console commands.
Third person flinch animations playing on friendly fire despite friendly fire not causing flinch.
Respawn timer forcing you to the next wave if your spawn timer expires while you're in class or weapon select.
Special daze when an out of stamina player blocks a projectile.
Server request allowing hackers to spawn as a king.
Dodging while dazed or special dazed.
Release flinch working on allies.
Players being able to bypass forced respawns by entering a siege weapon.
"Hiding spot" in the lake on Moor.
Infinite objective points from burning a certain house repeatedly on Stoneshill.
Players floating into the air if they're kicked while jumping.
Possible desync when trying to combo with insufficient stamina.
Possible desync with counterattacks ("fake counterattacks").
Shield hitbox for inactive shields counting as headshot damage for melee weapons.
Sprint speed not resetting when flinched with toggle sprint active.
Server filters sometimes requiring a reset to change.
HTML tags in player names.
Vanguards being unable to throw torches with sprint attack readied.
Lead balls not being able to fire after refilling ammo.
Crouch-jumping getting you stuck in crouch.
Queued shield blocks not having a capped turn rate.

Kick and shield bash hit detection now uses proper tracers and is more precise when on uneven terrain or against moving targets.
Kicks have a 1 second cooldown.
Charge system for kicks/shield bashes - tapping kick will perform a quick knockback and daze with no damage and a lower stamina cost, holding kick will do a slightly slower damaging kick with the ability to stun shield users.

Attacks cannot be feinted in the last 200 ms of windup (attack grunt will play at the start of this window).
Unable to parry for .4 seconds after a combo feint.
Combo feint stamina cost from 15 to 20.
Parries can now be combod into from an attack release the same way as attacks are combod, for 10 stamina.
Now able to parry in attack recovery - costs 25 stamina and does not allow counterattacks.

Being hit while wielding a ranged weapon no longer flinches, only cancels the attack.
Ranged weapons can be swapped away from or have their attack canceled at any time.

Chase boost now only activates against enemies with their backs turned.
Chase boost activates from further away.

Bonus stamina regeneration from crouching removed, base stamina regeneration increased.
New stamina drain values and absorption rates for all weapons (average stamina loss on parry generally lower, min-max values from 7-35 to 8-25)
A wheezing sound now loops when a player is under 30% stamina.
Out of stamina grunt will play when you try to perform an action you don't have enough stamina for, rather than when you swing with 0 stamina.

Alt swings have a .1 longer windup.
Special daze length from 1.5 to 2
Flinch for twohanders is now 1.1 instead of .8
After being flinched or parried, sprint is disabled for .5
Buckler animations redone to block less screen space.
When a match ends, the game no longer freezes. The losing team (or all players but the winner in FFA) are switched to fists.
Enemies have slightly larger collision than allies.

Dodge speed reduced by 10%
.3 cooldown on dodge.
Dodge disabled during windup and release.
Attacking disabled for the first half of dodge (attacks will queue instead.)
Base speed increased by 10
Sprint acceleration increased by 33%
Firepot damage from 7 per second to 6 per second.
Firepot ground fire now ignites players who walk over it for 2 seconds.

Sprint attacks sped up by about 20%.
All sprint attack damage values set to 100.
Increased weapon knockback on all primaries.
Sprint attack key can now be rebound.
Smoke throw windup from 1 to .6