Post news RSS Checking in on Samphi 0.6 - Why the delay?

So development news and updates have slowed down but I have legitimate reasons for this so I'm going to outline them here!

Posted by GreenyGamesStudio on Jun 15th, 2013

So 0.6 was supposed to be a regular update like all the other 2-3 weeks' worth of development and then I'd release it. That quickly went down the shit pan -_-. There are lots of little things that have changed as normal but this update is taking so long as quite a few core game mechanics are being rewritten.

It wasn't a decision of mine to do this in 0.6, I have sort of fallen into it but I'm now at a stage where 0.6 is the biggest update by far. Now that I have explained why it's taking so long I'll breakdown the progress of each major change.

Re-Coded the AI for Animals
So if you've played Samphi before you have most likely seen this PLENTY of times: 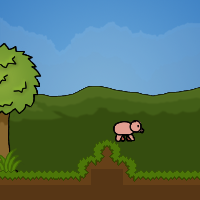 Pigs and the sheep both have a tendency to get stuck on blocks like this and just in general their AI sucks. This is down to one thing .... It's badly written. I've rewritten the physics for the player and dog and have been able to apply that to the animals as well. They are also now more intelligent and will run away when hurt. This system is about 70% complete; there are a few final bugs to iron out and then it's good to go.

Rewritten the player's physics
One of the most common issues I got reported was the bug with player jumping. If you were walking into a block and tried jumping you couldn't. You had to release all keys, jump and then move in mid-air. This issue no longer exist as I have finished rewriting the physics. A number of other issues have been solved as a result of this and the controls are more stable.

In the video it is almost complete but that is now not the case. This is to do with moving the terrain from using objects to tiles. I'll cover this next. I THINK I can implement the same lighting system that the objects use over to the tiles and everything will be dandy. That's my next job!

The levels in 0.6 are currently 2X longer than they were in 0.5 and I am aiming to make them 3X longer. Due to this it is now not an option to use objects in the way I am (they should have never been used in the 1st place) and am working on moving over to using tiles. I have never worked with tiles so I am learning as I go by experimenting. I have already made fairly good progress with this as seen in the image below. There is still polishing to do but there's a good basis for sure. 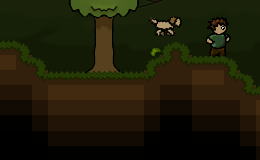 So this is a quick look at the major changes that 0.6 is going to bring. There are many than just the ones I've shown however I wanted to focus on the ones that are going effect the core of the game and are responsible for the time it's taking.

I hope this has showed that I am still in full swing with development and that the delay is only because I'm working on some big ass changes. I'd love to give an ETA for 0.6 but right now that's just not possible.

That's all from me; Be sure to follow @SamphiGame for development news on Samphi and @greeny_games for news on all my projects and general rambling. Ciao.

I haven't commented until now, but I've been watching Samphi since the beginning. I love seeing how you're progressing and evolving over time. It's inspirational; keep up the good work friend!

Ahh thanks :) It's awesome to get great support like this; It's really motivating! Glad you like the game.

glad to see the player physics are changing. i hated that jumping bug.

Yeah it annoyed me too. Totally fixed now :)