I've started working on some character modeling. So far there's a couple different versions of Player character and two Monsters. While modeling the Player I decided to model it (and every character) from separate smaller parts. When the character is killed with enough damage (or always), the model is easily exploded into these smaller parts.

The newest Player character version has digitigrade legs, so he's standing on his toes. This makes the character need to bend his legs quite a lot to fit a good sized hitbox, which may be a bit weird. Alternatively he would be much taller than I intended Player to be, or each leg segment would need to be shorter, or if none of that works, then I'll just make it with plantigrade legs.

I also experimented a bit on texturing the player with some different styles. The first few were done so that they could use any amount of colors/shades from the palette, but that didn't feel good or much different from what I've been doing the past few years. The newest one uses less shades for each color, this felt more fun and different.

The sword model was updated with a similar texture too and with a bit different shape: it has one wide cutting edge now. 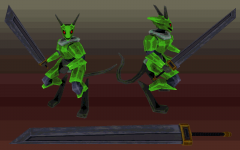 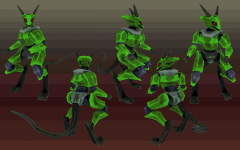 This kind of multi-part modeling and simple texture style fits nicely with armored, bio-mechanical or robot look for the models. I think it wouldn't fit so well with completely organic models. So I'm thinking the enemies will be some bio-mechanical monsters.

These monsters are probably some medium tier enemies. The 4 armed monster would shoot fireballs from the distance and at close range slash with the upper arms. The cannons have an edge loop at the wrist for some bending, but maybe that's a bit unnecessary. It could have some cuts in the shoulders, so that the middle area would break into more pieces when it's killed.

The other enemy is a flying enemy. It should have some guns under the wings, and there could be two different versions with two different kind of guns. The front bump could have some face or eyes. Maybe it could also have some antennas or spikes in the top/bottom parts. 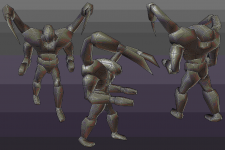 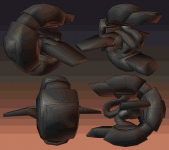 My plans for the next month are to finish these three character models, maybe do some couple simpler models, decide what kind of texture style to use and update textures to fit the style. Maybe I should also decide the name of the game.