Another eight months have passed so I thought it's time for a sign of life. For this update I want to show you some character related things that I spent a lot of time on. I also started to work on roofs, water and even on a business plan.

It has been a long time again since my last update but I won't bore you with excuses for why it took me so long. :) Here are some things I was working on instead:

I don't want to go into too much detail right now since both topics - roofs and water - still need a lot of work to be considered complete but in order to show you that I wasn't lazy I've uploaded a small GIF animation:

The idea to cut roofs at a certain height came to me by looking at a screenshot of the game Runescape. At first I wanted to supply a similar way for creating roofs as in The Sims 3 where you can define the angle for the slope but it turned out to be too complex. The simplification of cutting roofs and using a predefined slope made it possible to fragment them. So even if you can't see it on the screenshot, the roof is put together by several pieces. I might write a separate article where I explain more details about my mechanisms for creating walls and roofs in the future if you want.

The topic that bothered me the most was an overhaul of my character models. If you followed me on IndieDB you might have noticed that I didn't post much character related stuff. Let's catch up with that by showing you the embarrassing progress of my models over the years. :)

In about 2009 I tried to program a Minecraft clone in C++ with the Ogre Engine. Here's an image of my first 3d character models ever that I created at that time: 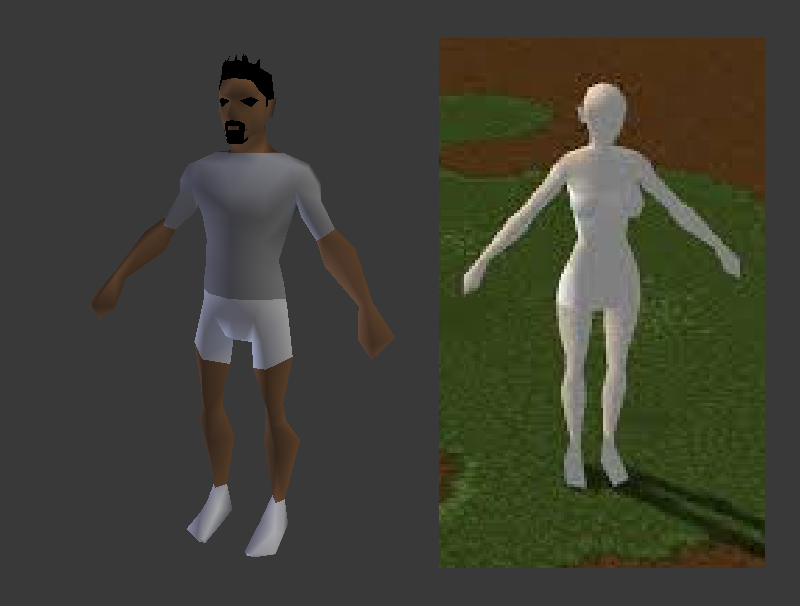 Sadly I lost the file for the female version, so I had to take an old image that I found with the help of the internet. Even these models were inspired by an early version of Runescape - the game's look made me think that their graphics would be easy to do - but I realised quite fast that creepy, sharp black eyes wouldn't work in a first person perspective. There were several other iterations of these models before I started my current work on GWAIN. The following image illustrates a more realistic approach where I also tried to improve my anatomy and texture drawing skills: 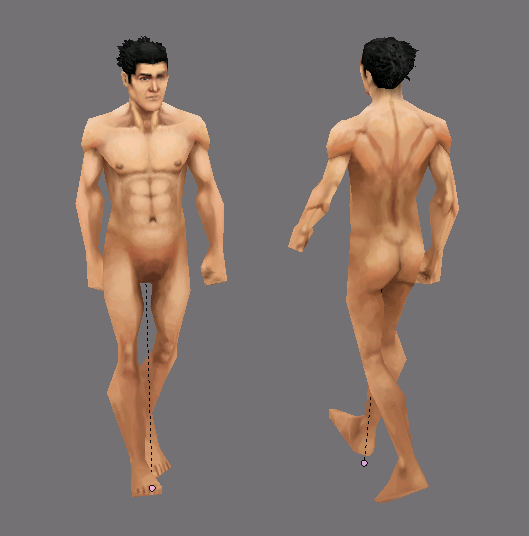 This model even contains a handmade walk cycle

It's up to you to decide, if it's better or worse. :) I've done that model under my old user name MetaDaemon. You can still find it at www.sharecg.com.

The next iteration found its way into my first version of GWAIN: 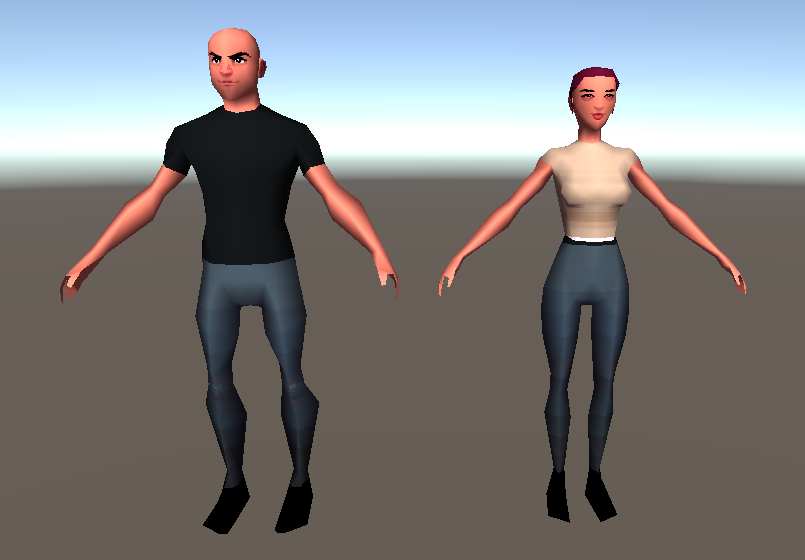 Their faces are based on old sprites that I originally made for a 2d game: NPC Faces

During the improvement of the build mode of GWAIN I also increased the resolution of the tiles for walls, furniture and so on. As a consequence the models didn't integrate well anymore. At first I tried to compensate that by using some kind of cell shading and more body and clothing details:

It didn't help! I tried to stick to the cell shading, increased the resolution of the texture and aimed for a more cartoony style. Even for this step I found an inspiration: an image of a low poly cowboy head posted somewhere on Polycount.com. Here's the result:

I added more polygons and removed the pixel art style

This version had similar problems as my very first model. The black dotted eyes didn't work for me so again I tried several variations. Link from The Legend of Zelda : The Wind Waker became another inspiration but the resulting models went too much Anime or Manga like:

I at least sticked to the idea to separate the geometry for the eyes and the mouth and put them just a tiny bit in front of the corresponding face to avoid z-fighting. However, my current iteration rejects the cell shading again and uses a different approach based on another inspiration: Albion Online which some people claim to be a Runescape clone so I guess Runescape has a lot of influence here. :) Without further ado, here's my latest version:

Facial Features similar to The Legend of Zelda : The Wind Waker

Please let me know what you think about it. I am not afraid of creating more iterations. :)

Yeah, I tried to create a business plan. "Why now?", you might ask. Well, that's part of a different story but I really would like to earn money with my game at some point and creating such a plan really helps answering several important questions: How many copies do I have to sell to be profitable? How do I sell copies? Should I use a custom website? Should I use Steam? Which legal form of a company to use?

I would like to share with you some of the facts and answers I've obtained. For example: An average game on Steam sells about 32.000 copies. Let's assume that I want to earn about 1.250 € per month after taxes, i.e. about 2.500 € before taxes, which isn't much for German standards. Steam doesn't discuss their revenue split publicly but gossips in the internet claim that they will take about 30% of the revenue and taxes are removed before calculating these royalties.

To reach my 2.500 € (before taxes) per month and based on my revenue of 5,88 € I would have to sell 425 copies per month. If I can sell 32.000 copies too, I would be able to make a living out of it for about six years. But how do I reach 425 paying customers each month? Looking at the stats of GWAIN here on IndieDB I barely reached 3.800 visitors over a period of about two years and this number doesn't tell anything about their willingness to pay 10 € for my game. Okay, the development isn't finished yet and I didn't do much advertisement but these numbers still did a good job at impressing me.

Bare with me, please, if my next update will take some time again. This update for example took me about three days, i.e. collecting old files, creating GIF animations, writing the text and so on. Please rest assured that I won't stop developing and that I'm as passionate and motivated as at the beginning of my journey. If you have questions or feedback of any kind, just add a comment to this post or in the forums. Thanks for reading and stay tuned. :)

This update look very cool. I am just thinking, why do you speak in euro, are you from an European country ?

Thanks in heaps for your kind words and yes, I'm from Germany. :)

Nice work so far, but "from Germany"?!
This will cost you a lot of clicks :-)

I enjoy the details in the facial animation, instead of the static pose a lot of games take.

I'm glad to hear that. Actually, I'm aiming at animating the eyebrows and mouth, too, to hopefully reach a similar quality of facial expressions as in The Wind Waker.