The open alpha (v3) is now out. It includes new maps which were specifically made for beginners so that they can gradually learn the parkour mechanics of the game. Some heavilly requested features were also implemented alongside some bugfixes. 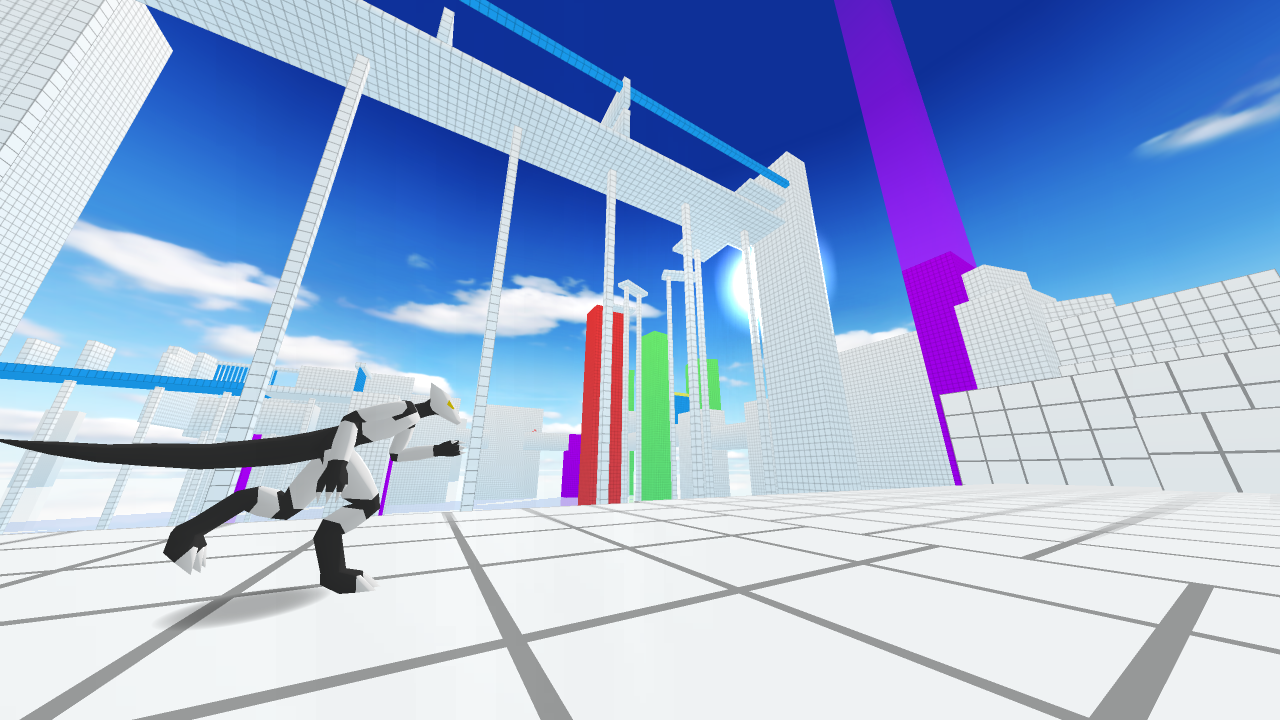 While there is a "tutorial" in the game which explains the controls of the character, the levels in the previous alpha versions were a bit too demanding for first-time players.

Having a tutorial which explains the basic controls and lets you finish a simple map isn't enough. We can't just throw them in a (rather difficult) map and demand that players are comfortable enough to finish them. The game needed maps which help the player to learn all that stuff outside of the tutorial.

The first maps i made for the alpha weren't really that difficult but first-time players had problems maneuvering throught the maps efficiently (losing a lot of time on simple jumps, etc...) So having maps which actually help the player to grasp the concept of the game was a big focus in this alpha release. 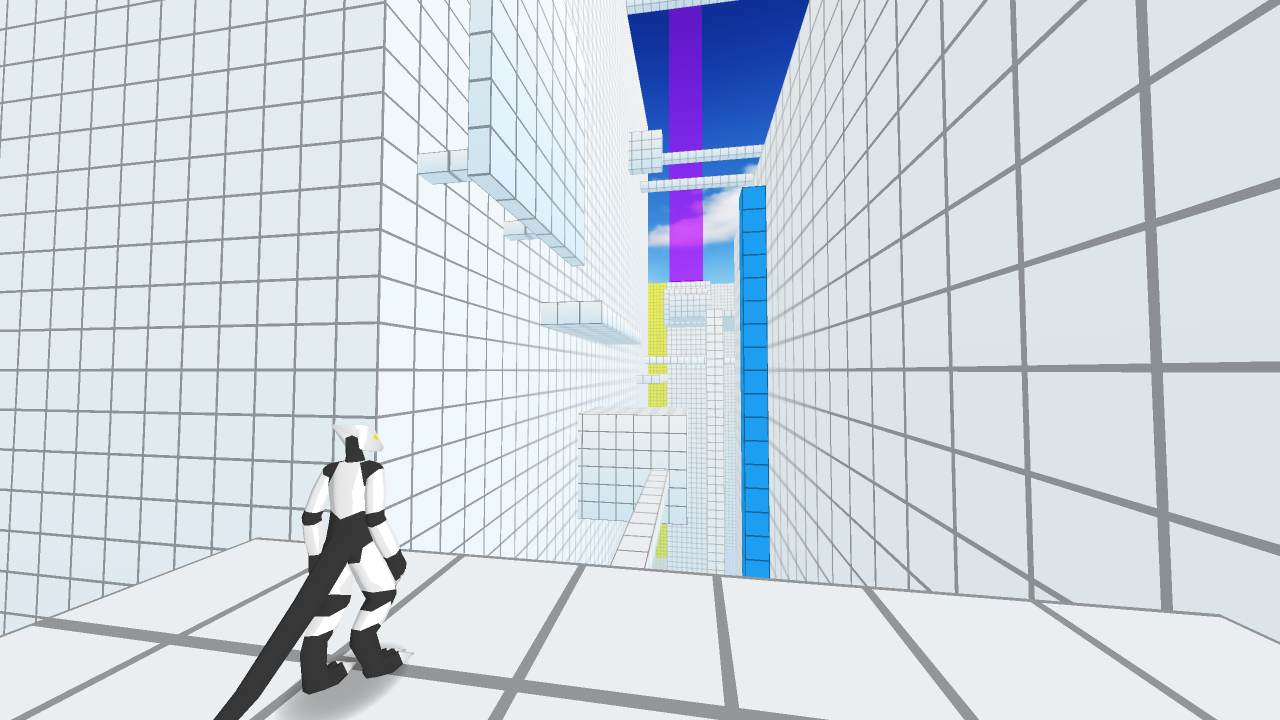 Throwing the player in these kind of scenarios right after the tutorial (which is entirely optional btw.) is going to get frustrating pretty fast. Without knowledge on what is possible within the game and without the basic concept of "flow" players can spend up to 4 to 5 minutes in finishing this map. (with a bit of experience, this can be achieved in around 30 seconds.)

So i made 5 maps which are farily basic. The goal was to strip them down as much as possible (compared to the previous maps) without taking away from the challenge of completing the map (but doing that with a more gradual difficulty curve). It was important that the player learns basic things like the existence of shortcuts, the importance of map-awereness and the concept of "flow". 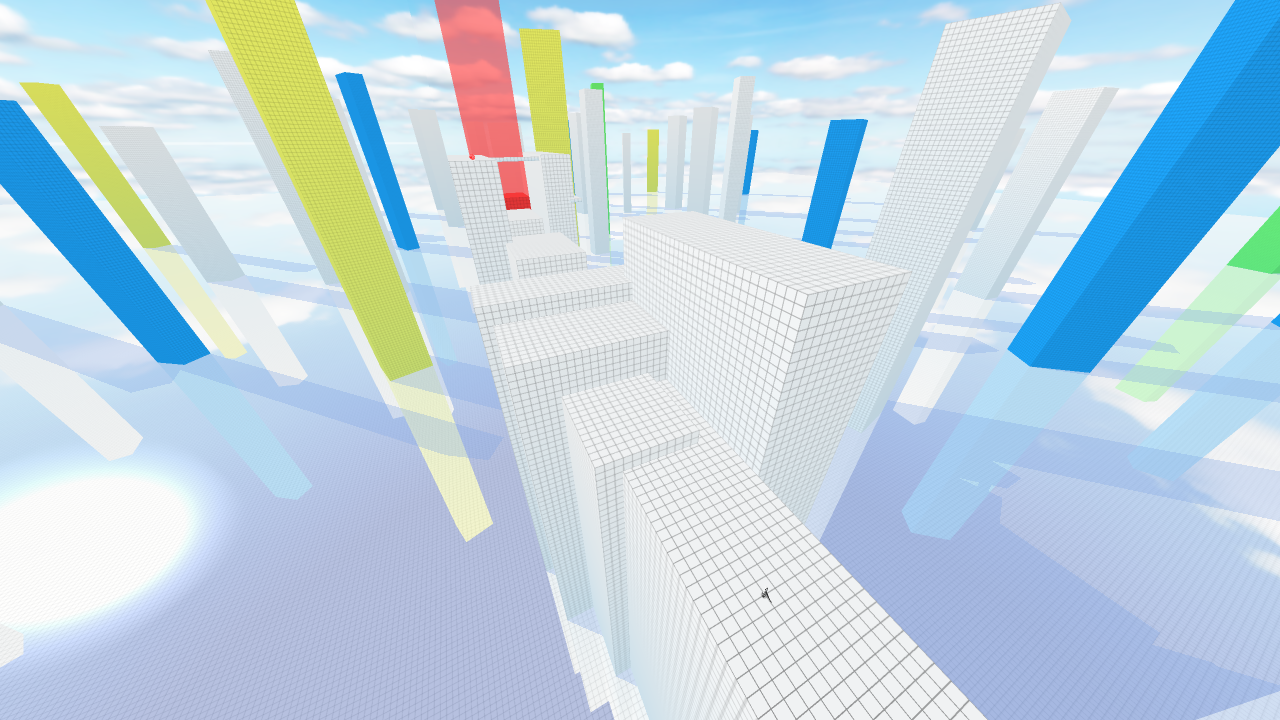 Starting with very simple maps which aren't overwhelming for starters. Getting fammiliar with the "flow" and maybe starting to see possible shortcuts which can be taken advantage of. Map-awareness is the key to success.

The maps put the player into different scenarios. The first two are fairly straight forward. Both of them show the player how jumping and wallrunning can be utilized. Then the maps start to introduze the different block-elements into the game. Like the blue block which is pretty much like "ice" or the green block which allows the character to jump much higher. This gives the player the opportunity to see how those additional gameplayelements can be used to his/her advantage in completing a map.

The maps are also designed in a way that players may not recognize some shortcuts in maps they already have beaten but as they get introduced to more and more possibilities/parkour moves they may revisit older maps and use their knowledge to their advantage in order to improve their previous time. (Which can result in higher ranked medals.) 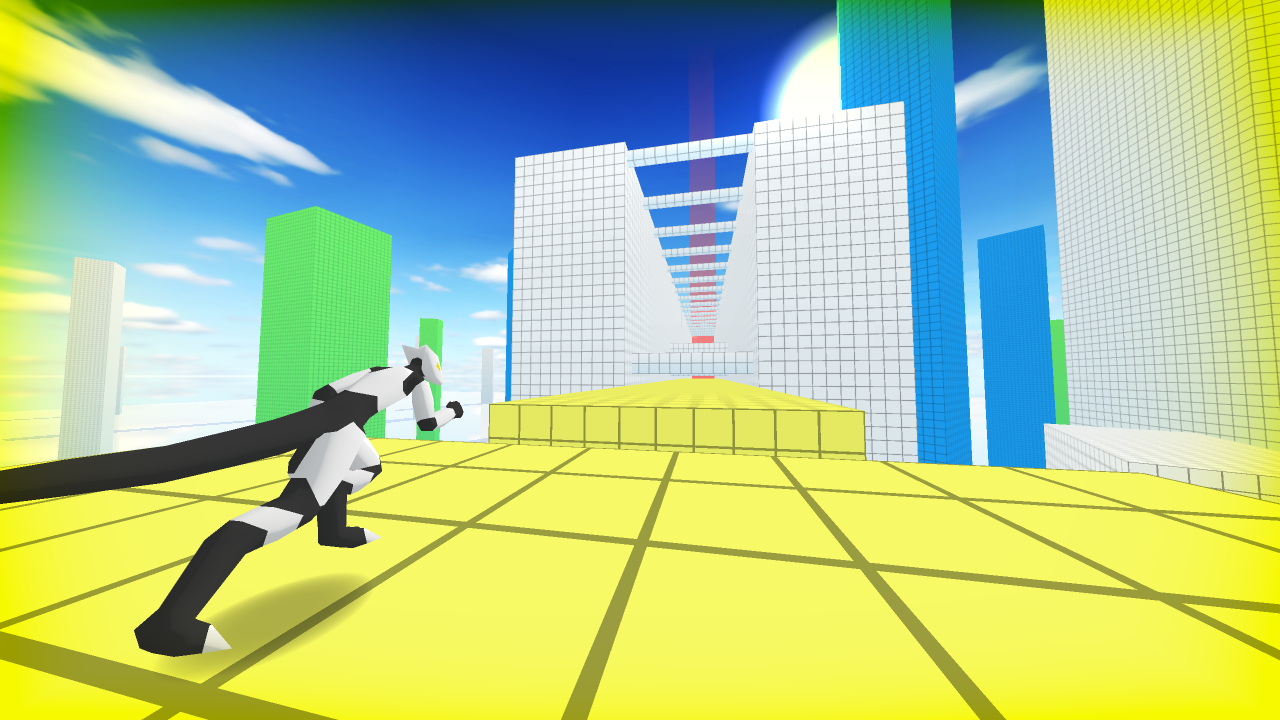 How does the character behave if he accelerates up to a top speed limit of around 170 km/h? Let's find out.

So in total there are now 5 new maps specifically made to learn the basics alongside the 4 older maps. 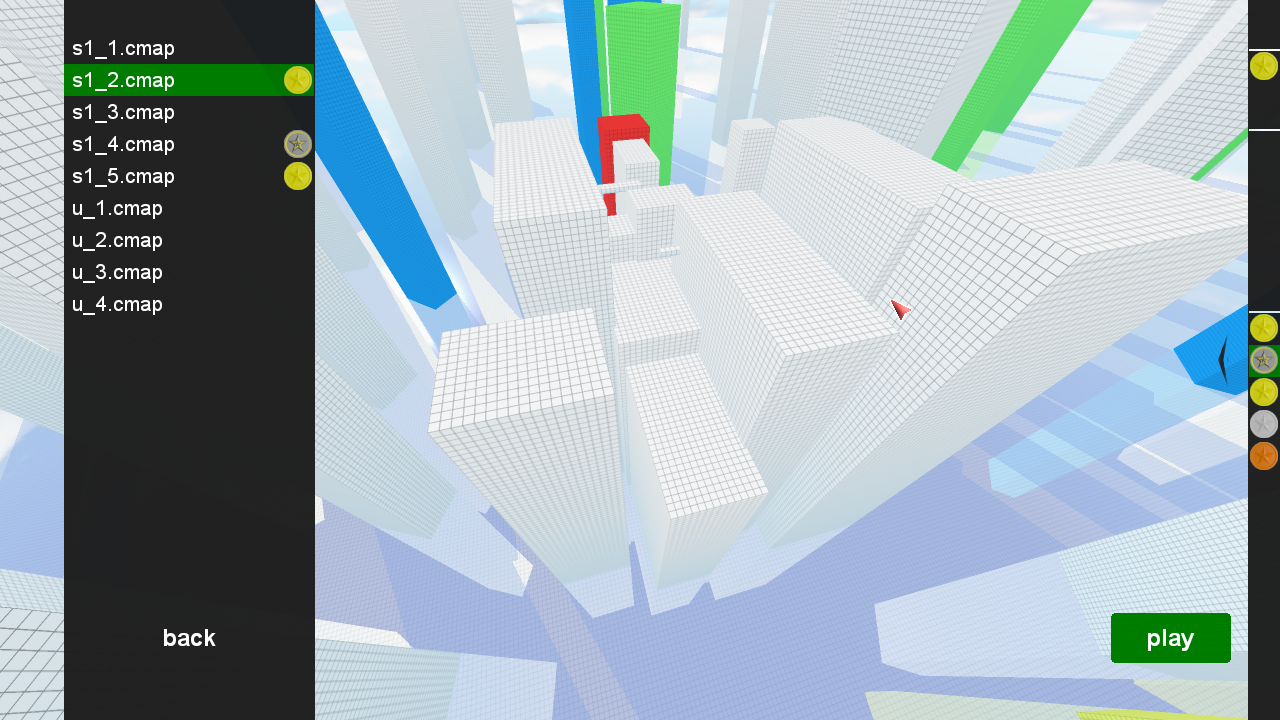 There will be of course more maps in the future. The current plan is to release at least 25 maps for the time-trial singleplayer mode. (5 maps with 5 different difficulty ratings.)

I also took the opportunity to show the player that there are infact hidden "gems" scattered around the map. They force the player to explore the scenery a bit and leave the "normal" path for once in order to find a way to them. In the later levels, those gems are much more hidden and not as obviously placed like in the first ones.

In terms of gameplay, those gems are here for the people who like collectables and they also help to encourage the player to explore the maps a bit. It also adds a bit of variety to the gameplay, as the exploring/searching for paths to those gems is more like a puzzlegame compared to the timetrial mode where you also have to be very precise with timing and optimizing your routes. 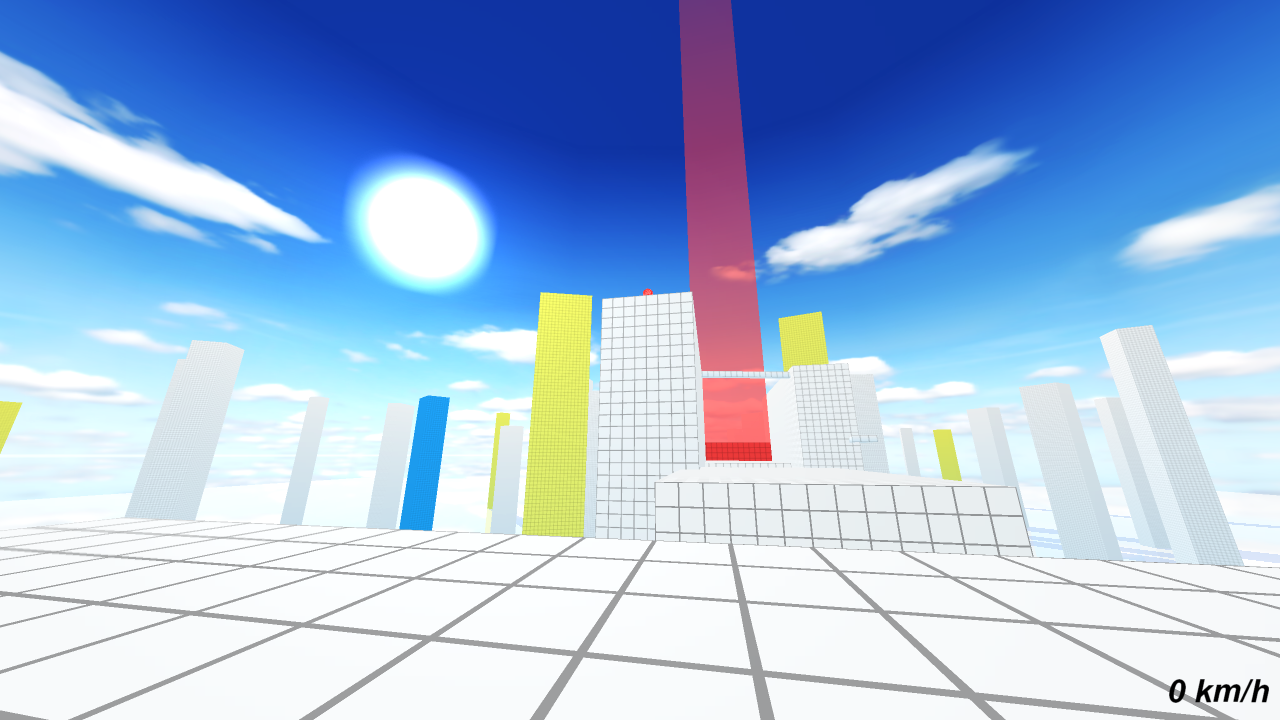 There seems to be a shining red ball on top of this block. I wonder how to get up there...

One of the biggest requests i got was that the respawn timer shouldn't be 3 seconds long as players restart a map pretty often and waiting those 3 seconds can be a bit tedious.

So my initial reaction was to allow players to customize the timer. So a new section in the options menu was added ("gameplay" options) with the said customizability. Now the players have the ability to reduce the timer down to even 0,2 seconds delay. The problem is that this effect also takes place if the player starts a new map. (So he/she can barely get a glimpse at the scenery before the run starts.

So to fix this issue, i split the timer in two seperate timers. The "initial" timer is used if the player starts the map directly from the menu. This way the player has 3 seconds to prepare for the run. Every respawn after that uses the second timer with a 1 second delay, so the player doesn't have to wait for the 3 seconds to try again. Both countdowns are of course customizable. 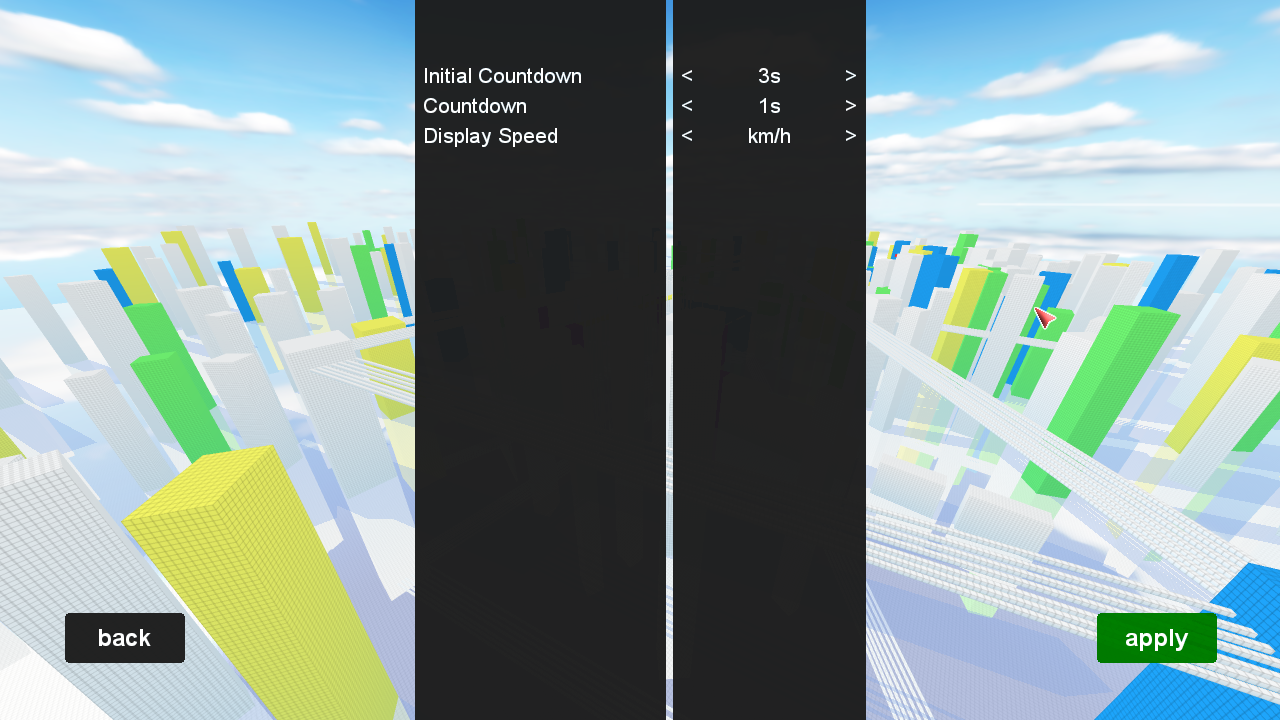 Getting the best of both worlds. Fast respawn and enough time to prepare for new runs. With complete customizability.

The fallingspeed in the previous alpha versions was very limited. It almost looked like the player was falling in slow motion. Now the speed cap was increased which results in a much more realistic (and exciting) falling. The gravity acceleration is unaffected.

Even thoug the wallrun detection was improved in the alpha version 2 it still had some problems in detecting the wallrun if the player ran at a wall at a steeper angle. (The issue was that the game took the movement direction and the camera direction into account which not always worked in practice.) Not this has been improved so wallrunning should be more fluid and responsive.

There are also some smaller fixes/adjustements/tweaks which are summarized in this changelog: