Welcome to the ninth major patch of Levelhead. It's PATCH 0.10: BURN IT DOWN! Although we got hit from thirty different directions over the past couple weeks by the Fourth of July break and the Shenanijam, we still managed to cram some great new features into Levelhead. Let's check it out!

Hey, Levelheads! Welcome to the ninth major patch of Levelhead. It's PATCH 0.10: BURN IT DOWN! Although we got hit from thirty different directions over the past couple weeks by the Fourth of July break and the Shenanijam (at which we made an MMO in a weekend), we still managed to cram some great new features into Levelhead. Let's check it out!

The first HUGE change in this patch is that we have gotten rid of the concept of "unlocking Editor items through the campaign." Yep, that's right... All players now have access to all of the editor items, right out of the gate. Well, mostly. You still have to beat the first two campaign levels to get access to the workshop, but that's it!

This is a pretty dramatic design shift. WHY DID WE DO IT? Our original intent with the "Editor Items Unlocked via the Campaign" approach was to teach players how the game works, so that people wouldn't be overwhelmed by the editor and the crapload of items therein. However, we got a lot of pushback about this concept from players who were coming into the game wanting to just build stuff, but suddenly being met with a long (and ever growing) campaign that gates content behind time and, in many cases, a lot of skill.

After some soul-searching and conversations with our community, we came to believe that our original design was doing more harm than good.

Some people just want to get right in there and learn by building, and that's totally fine. We think we should embrace that, so we are! And for those who are looking for a more structured learning experience, the campaign still exists for that purpose, but now you don't have to do it. HOORAY!

What HAPPENED? When? Why? And who is doing it? And does it EVEN MATTER? These are questions we all want answers to, but we simply didn't have them. UNTIL NOW! 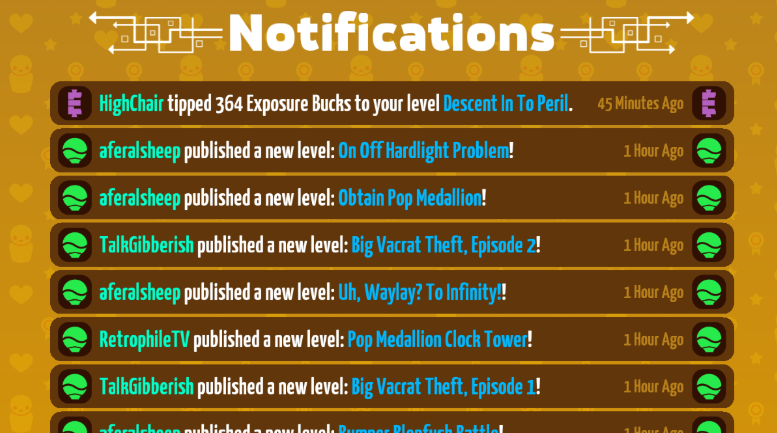 Levelhead now has a new NOTIFICATIONS page, so you can see who did what and when! Did someone tip Exposure Bucks to your level? Did someone subscribe to you? Did someone STEAL YOUR PRECIOUS CROWNS? Now you know!

The Notifications page will display up to 100 notifications at a time (currently), and it also includes handy links so you can go straight to a player's profile or play a level directly from any notification.

As part of our push to make the game more accessible, we want to add as many useful Rumpus login pathways as possible. One issue we kept running into was that some users, perhaps because of their country of residence or other reasons, couldn't use our normal e-mail login mechanism. So we dug through the Steam SDK and hooked Steam up to Rumpus, and now you can just log in to Rumpus with Steam!

On Monday night, famous Levelhead designer TalkGibberish @shk22l posted a fascinating composite screenshot of a level he was working on. To create this giant screenshot, he had to pan his camera around manually, take a bunch of screenshots, and then stitch them back together in a photo editing program.

As soon as I saw this image, I thought... WAIT A MINUTE. What if the game could just do this automatically? WELL GUESS WHAT. Now it can! In the Editor you will find a new button that looks like a camera.

Click that button at any time, and the game will rapidly move the camera over your level, take a series of screencaps, and stitch them together for you on its own. It will then create an image out of your entire level, along with your name and the level name at the bottom of the image, so you can blast the image out to all of your adoring Instagram followers, or whatever. 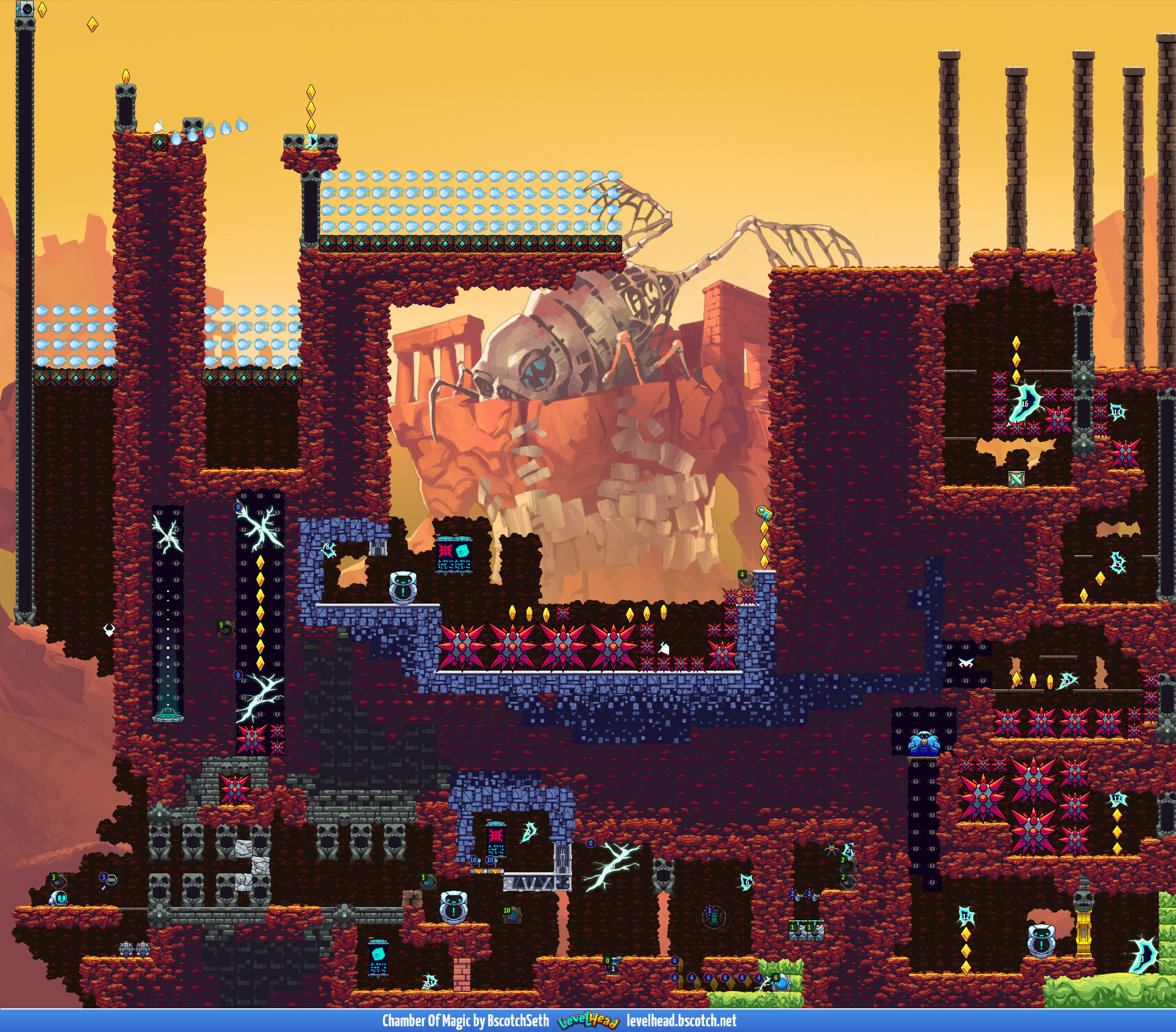 The screenshot will be stored in your game's save folder, and it will also automatically be saved via Steam. When you close the game, Steam will ask you what you want to do with your screenshot -- upload it, get rid of it, or whatever! Hey, it's your screenshot. DO WHAT YOU WANT!

We've gotten frequent requests for XOR logic in our switch system, so we ADDED IT. "WAIT A MINUTE," you might be saying. "What the heck is XOR logic?" XOR logic is a programmer's way of saying, "One but not the other." By bringing XOR logic into Levelhead's switch system, we have added yet another tool to our creators' toolkits, so they can do stuff like this!

What else can you do with XOR logic? More like, what CAN'T you do with it! But seriously, I don't know. You figure it out!

Spike Chainers can swing now. It looks like this!

There's not a lot to say about ithat, but it does look super cool, so I had to make a gif. Oh, and they can swing any direction, so if you want a weird sideways swinging spike, you can do that, too!

And some other stuff!

Here are a few more quick updates to take note of!

All right, I have to get back to work. If you want to know more, read the full patch notes below!