Post news RSS Dev Diary 5: Building the Arth Starship for Starflight: The Remaking of a Legend

Hi guys! Before completing the huge Arth Starport Marvin realised he needed to complete the Arth starship model for his Starflight: The Remaking of a Legend project. After a quick vacation he also started work on the Starflight remake map!

Hi guys! Before completing the huge Arth Starport Marvin realised he needed to complete the Arth starship model for his Starflight: The Remaking of a Legend project. After a quick vacation he also started work on the Starflight remake map! Next article will cover the continuation of Marvin creating the new Arth Starport!

What I did first was start with the original game’s ship configuration screen, bring it into 3D Studio Max, and set up the grid and units so that one square foot is exactly one square pixel on the game screen.

Then I started creating 2D splines outlining the various sections of the ship’s hull, cargo bays, and weapons turrets. From those 2D splines, I used the compound loft tool to create the general 3D shape. Then I edited each model and used chamfer, extrude, and other fun tools to impose my will upon them. The really cool thing is, if you look at the ship top down, the profile is still exactly the same as in the original game.

I am not entirely satisfied with the cockpit area of the ship. To me, it looks too much like a snake’s head. Then again, so did the cockpit in the original game! I am also having a bear of a time trying to texture map this puppy. No matter what I do, it just looks wrong or cheap. I am going to have to solicit the aid of someone to help me out with the texture mapping.

Here are a few screen shots of what it looks like in 3D Studio Max, as well as some renders using Mental Ray. It’s coming along quite nicely! All of the files for this ship can be found in the Max\Ship folder.

Today, I did the painful process of properly UV mapping the entire ship so that the texel size is uniform all around. All that is left to do is to atlas the texture maps (easy!) and create the textures. I will leave this to someone else to do. I am far enough in the ship modeling to use it in Unity now.

As a bonus also here is the latest ultra wide screen desktop wallpaper that I am using now.

I will be on vacation in Maine for a week so there will be no updates for a little while. See you all later!

I am back from vacation! I was in Maine for a family reunion. It was hot and humid and had loads of mosquitoes.

Today, I worked a little bit more on the Starflight map Illustrator file. Using data from the actual Starflight game, I recreated the Starflight map. There are some noticeable differences between the map I made, and the printed map that came with the game. Some of the nebulae are in the wrong positions on the printed map. I will have to fly out my ship to those areas in the original game to verify. I exported a few different versions of the map; a “clean” version which is basically identical to the paper map that shipped with the original game, a version with all of the fluxes drawn in, and a version with all of the alien encounters drawn in. The alien encounters version is incomplete – I have not yet put in all the data for that into Illustrator.

Here are some PDF files that are infinitely scale-able and will look pretty when printed on large paper. 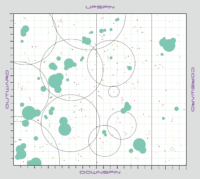 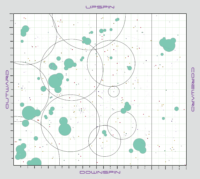 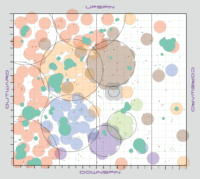