It's been a long time since I've written a dev log for Village Monsters, and it's been *even longer* since I've made a Blingee So I've decided to rectify both of those things today!!

Man, it’s been some time since I’ve written a dev log! Of course, this is because dev logs have evolved into patch notes (so many patch notes) since Village Monsters released into Early Access, so I haven’t really had need of them.

But for whatever reason I was feeling especially motivated to write something up for the next update – which, by the by, is coming out on the scariest day of the year, Valentine’s Day.

Let’s take a look at what’s coming up!

One of the biggest new additions is the ability to send mail and gifts to villagers.

Just mosey on over to the post office (located in the town hall) and send a nice letter to whoever you’d like. This is also how you send gifts!

Villagers have only minor preferences in terms of the letters and gifts they receive, but this will be expanded upon later. For now, it’s a great way to increase your friendship.

Just don’t be a jerk, ok? Villagers can “read” letters and may even store them as keepsakes, so you wouldn’t want to embarrass yourself.

Village Monsters has been in development for three years and every single day I receive the same questions over and over again:

On and on and on. I’ve given you the ability to pet your tamed critters, is this not enough?! 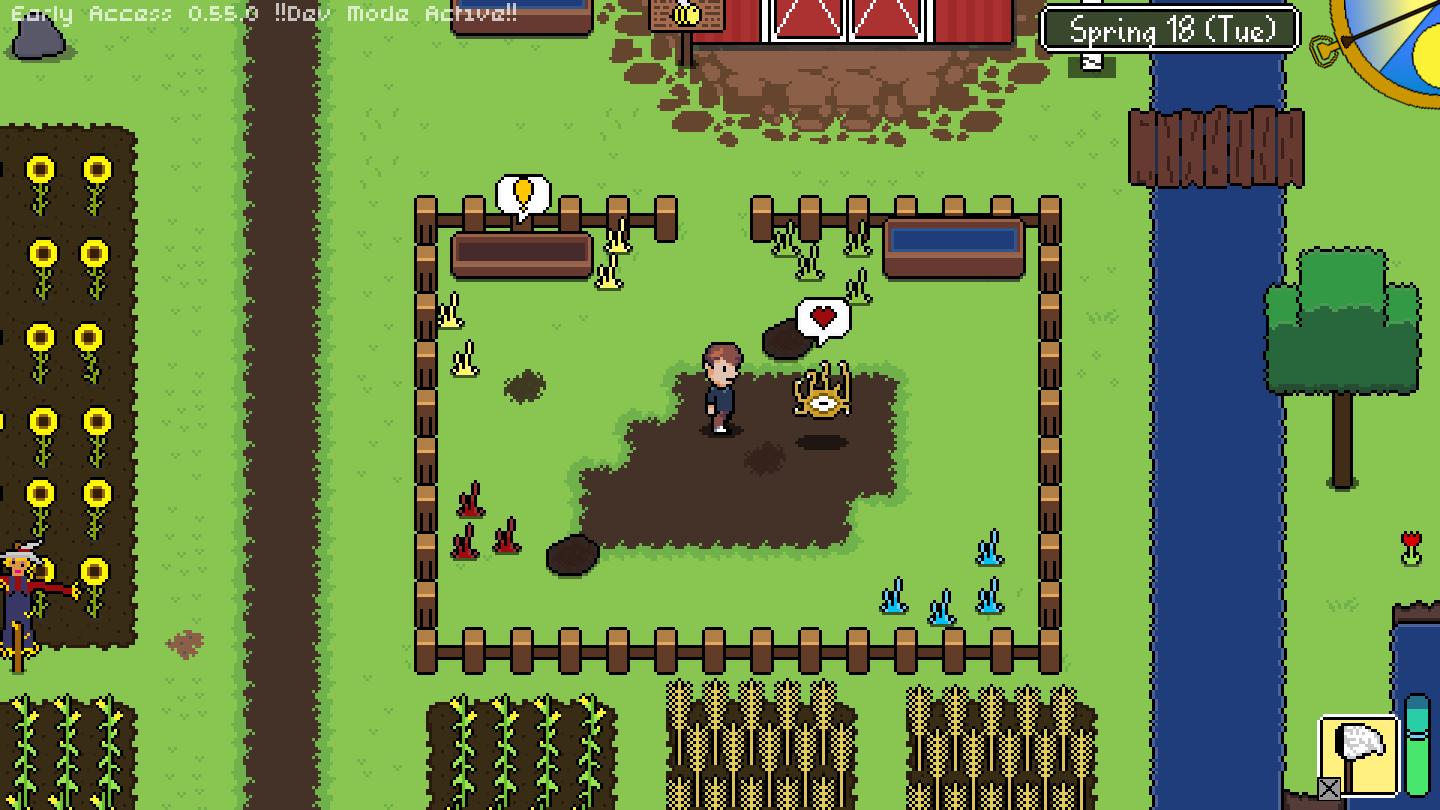 Ok, in all seriousness I’ve been analyzing how love and romance will play out in Village Monsters.

When I first designed the village I did so without thinking of player romances – instead I wanted a well-established villager with tons of preexisting relationships for you to discover.

I’m not against player relationships, but I don’t want to break up existing relationships just to make room for the almighty player.

So: a compromise! Players will be able to romance the few single villagers as well as visitors and other special NPCs! If you do romance a visitor you’ll even be able to invite them to live in the village after a certain point.

This next update won’t contain the final romance system, but I am laying the groundwork and I may be able to include some things to get your hearts thumpin’

They say that if you love the world then the world will love you back. Actually, they don’t say that because I just made it up, but feel free to put it on a poster.

I’ve added a new kind of daily change called World Modifiers. These are (temporary) special bonuses and other changes to the rules of the world.

For example, the “Restless Critters” modifier means you’ll encounter many more critters out in the field, while “Hen’s Teeth” has fewer critters but they’re guaranteed to be rare. “Good Vibes” makes it so you earn friendship points faster.

The ultimate goal for World Modifiers is to encourage players to branch out and try something new each day. We’ll see how it works! 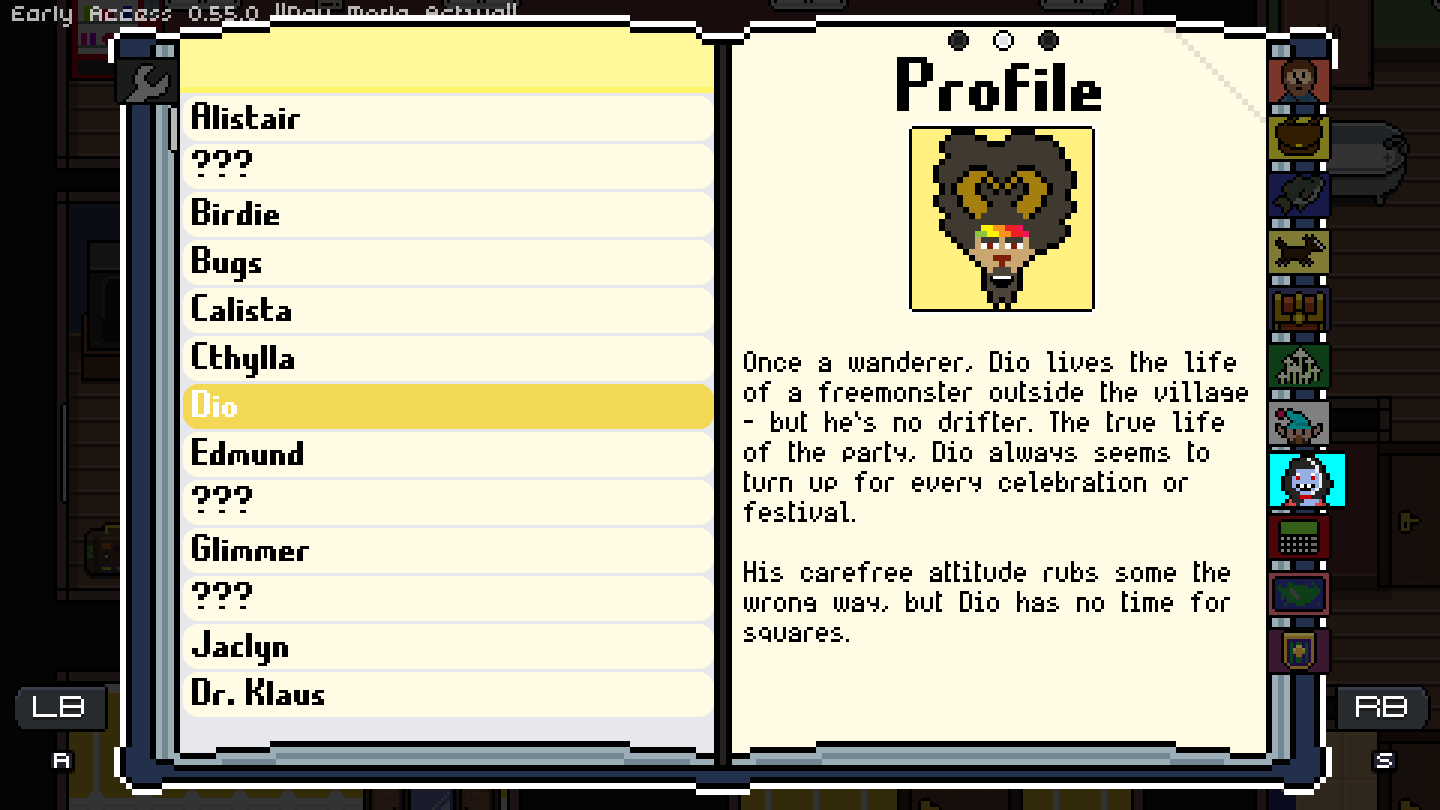 I’ve targetted the following UI elements as “desperately needing love, attention, and care” for this update:

The Village Profiles page of your journal will get some extra special attention. I’d like these pages to get gradually filled out organically the more you learn about a villager – we’ll see how much I can get done before release.

Finally, I would absolutely love to get a working version of the cutscenes system in the game. This will allow for story moments, friendship skits, future romance scenes, and so on.

However, it’s by far the most complicated system I have left to do. I have a few working prototypes already, so I may just include one of them and see how it goes, or I may hold back until I get something done that I’ve proud of. We’ll see!! 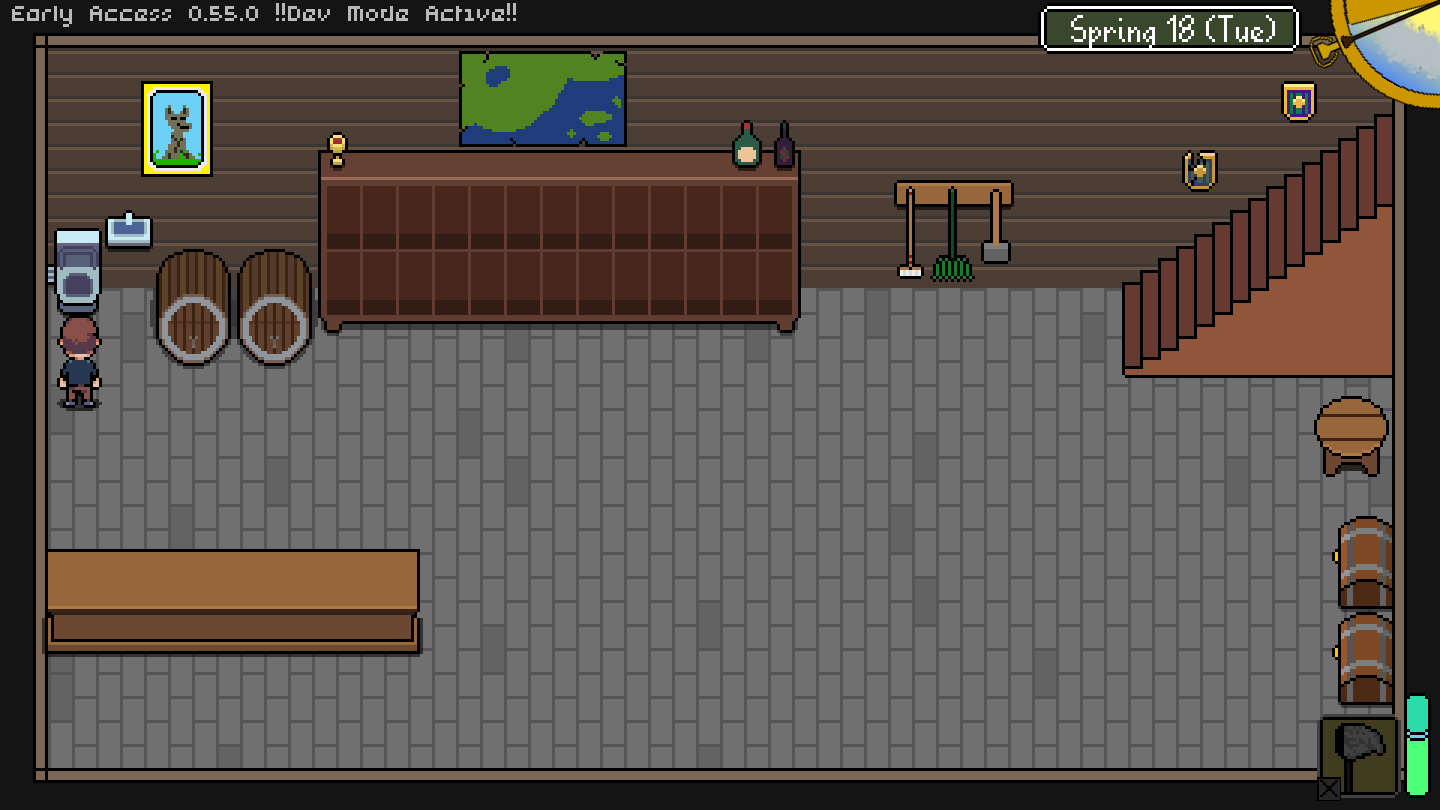 That’s about the shape of it! Of course, as with all my releases I tend to work on a bunch of other random stuff that suits my mood, so who knows what else will be included? A whole lot of bugfixes, I can tell you that much!

Look forward to its release on February 14th!