The governments of Brunelleschi are entirely player built and run, but what happens when your rulers stop logging in?

Even settlements full of active residents can start falling into disrepair if the Sovereign and/or sitting Ministers stop tending to their duties. It is from their inventories that building upkeep is drawn. Even a settlement with a few active ministers might begin to fall if those ministers don't have access to the resources needed to upkeep their buildings. However, players do not have to sit helplessly as their home settlements decay around them. It is possible to enact repairs, and some settlements may even allow for the forcible replacement of current office holders. However, the more Authoritarian a settlement is, the less power it's residents have to fix the mistakes of their rulers. 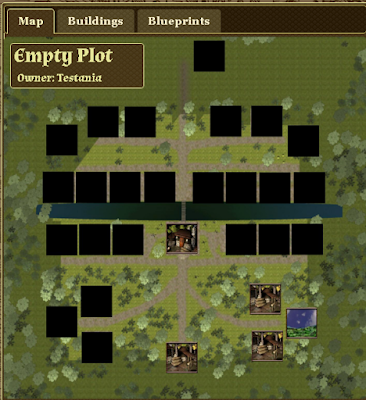 Like most things in Brunelleschi, all buildings require upkeep, usually of the materials it took to build the building in the first place. Buildings that have been upgraded require more upkeep based on how highly they have been upgraded. Upkeep is taken from the inventory of the building's owner. If the building is owned by the government, this owner is the Sovereign, or the Minister of it's home district if there is one. Otherwise, the building is privately owned and upkeep is the responsibility of the player-owner. If that upkeep isn't met, the building begins to fall into disrepair, eventually taking structural damageand finally deconstructing entirely when they lose all their structural hit points (SHP). This is representative of the rot, infestation and decay that happens to buildings left completely unattended, but decay still happens to buildings with active player employees if the upkeep is not paid. 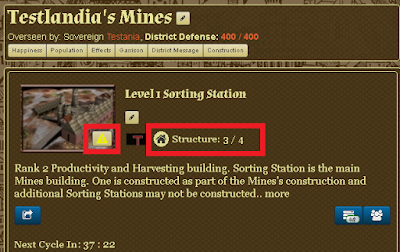 Districts take upkeep too, represented by the upkeep needed for their Main buildings. If the Main building collapses from lack of upkeep, the district will collapse as well. Collapsed districts are essentially lost from the settlement, along with all the buildings that were inside of it. If this happens, these buildings won't be recovered, even if the Main building / District is rebuilt by the sovereign. 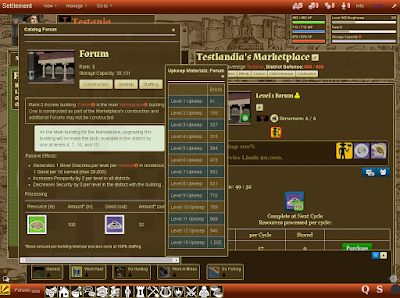 Players above Lvl 25 can repair a building that's taken damage at the cost of 200 Hemp per repaired Structural Hit Point. In this way, player-residents can prop up an abandoned settlement or Government officials can repair the damage done by their inattentive play. To repair a building, simply inspect a damaged building and click the 'warning' symbol next to it. This should open the 'Repair Building' Actions pop up. Technically from this point, you can select every damaged building in the settlement and repair them all in sequence, that is if you have enough Hemp and Action Points. 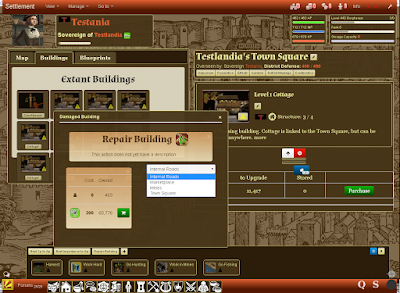