First and foremost, Happy New Years, here's hoping for a great 2020 for everyone!

Like I mentioned in the previous devlog, I was going to take it easy in December to give myself a little bit of a break from constantly working on Bright Red Skies. But now I'm going to try and bring the progression pace back to what it was before December. I did still manage to get some stuff done for this month, including better UI scaling for different screen resolutions, adding tutorial popups for when a new game mechanic is shown, and reducing the file size of the game.

There needs to be a point in the game where game mechanics are explained so the easiest way to explain these concepts are through popups with images and text explanations. Since there are some concepts that aren't very intuitive, like initiative and taking multiple actions, it feels like there's no elegant way to explain these mechanics other than directly explaining them.

I received some complaints that the UI scaling was not working well for certain screen resolutions like ultra-wide screen so I updated all of the UI elements currently in the game including combat UI, player menu UI, and all popups to use screen percentage scaling rather than Unity's canvas scaler which scales based on either the width or height of some reference screen size. Doing it this new way makes sure that every UI element covers the correct proportion of the screen in both width and height. There may need to be more thorough tests done to make sure that the UI looks good for all the different screen resolutions, but all the important information of the UI should now be shown within your screen for any resolution.

There was some major need in cleaning up the project, in terms of there being a lot of unused assets. Also, there was no image compression being done, so the in-game sprite textures were taking up a lot of space. Fixing these issues allowed there to be about a ~40% reduction in the total game size (from 1GB to 600MB). 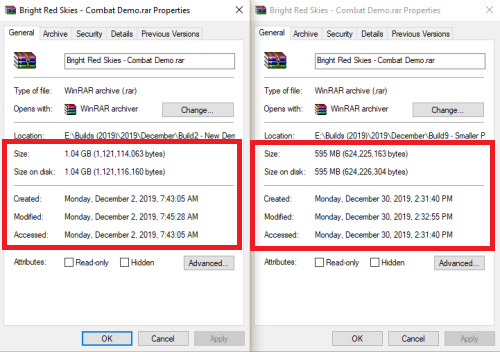 This is a section of the devlog where I like to talk about the parts of the game that were improved but aren't necessarily big enough to have their own section. For December, not too much was done overall, as previously stated, but some of the other things that were done are:

So, taking a break was nice, but for 2020 I'm hoping to get a good amount of work done on Bright Red Skies! For January, some of the things I want to complete are:

If you have any suggestions or want to give your opinion on the game, follow me on social media, I listen and respond to all comments :D