An update on how IndieCade went, plus a screenshot of some broken BHB units and one big nasty creature.

Well IndieCade was a blast! While there I got to meet a lot of people and got to try other people's games. Nintendo, Microsoft, and Sony all had talks, which was pretty awesome. One thing that stood out to me was when Nintendo was talking about how to get your game onto the eShop, it was really interesting to learn about the process behind it. Hint hint? ;)

One of the games I tried at IndieCade that I really liked was called Lens, it's a student project and was a runner up for the Unity Awards 2013 in the student category. I met the guys on their team and they're really great guys so you should check it out!
Indiedb.com

I also got to see the game Tearable World in action and I have to admit it was pretty awesome too! I have a lot more to say about IndieCade, and also have pictures from the event and people playing BHB but I still need to get myself organized so I'll save it for my next post.

And lastly, I thought I'd get clever with my next screenshot and do a little homage to a certain popular TV series. Turns out Bh is an actual element on the periodic table so it works perfectly lol. Basically what you're seeing here is a screenshot of a bunch of broken BHB units left behind as a massive monstrosity of a creature crawls away into the shadows like it owns the place (possible boss battle?). Some of the broken BHB units are still conscious. 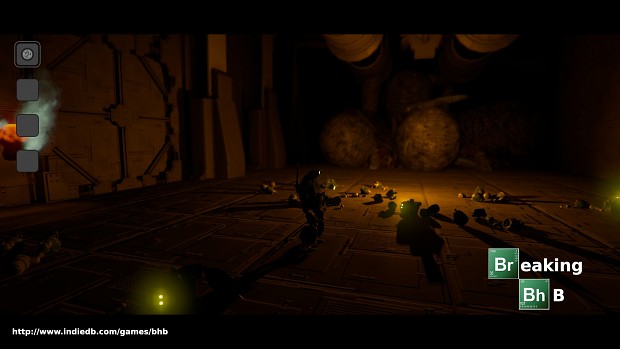