While there is a ton to do still - there always is - this build marks the implementation of the last (until we can think up some more) game-wide mechanic, leaving room for actual fun stuff, like adding new actions to use while designing your AIs. 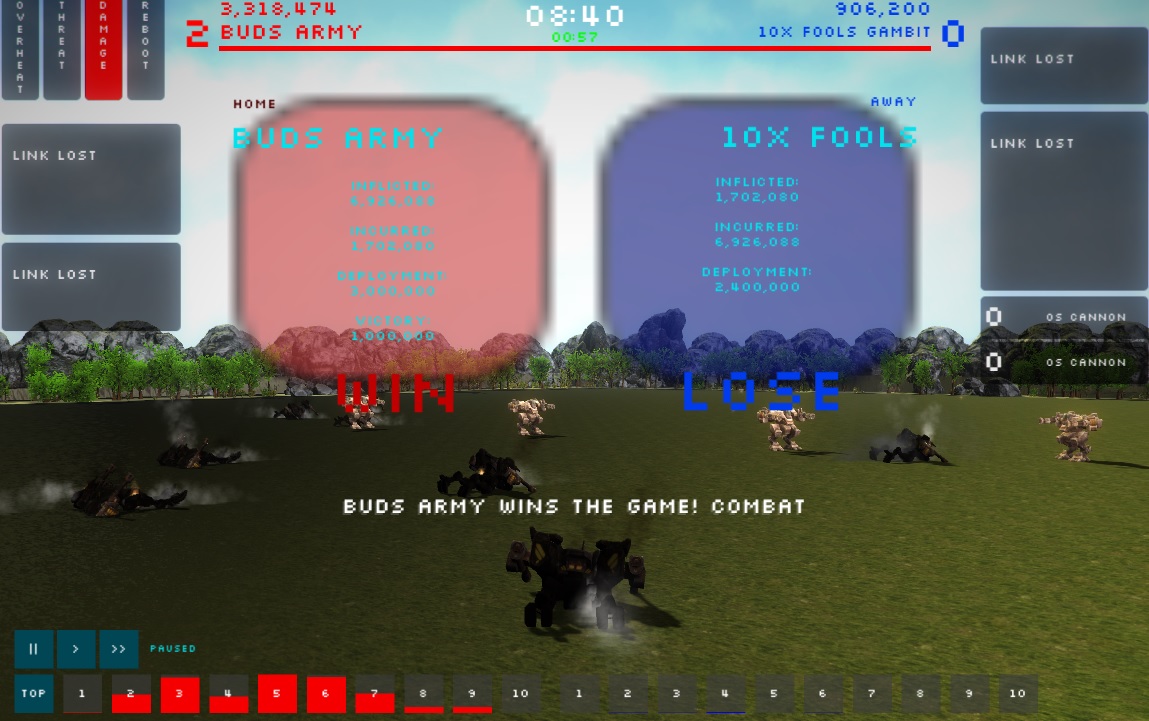 Environment: lighting redo
Or at least an attempt at balancing.

Gameplay: finally implemented heat and heat dissipation
Each action contributes to raise the heat, which is reduced at regular intervals by the bot's HeatSink stat.
Upon reaching 100%, the bot locks for 10 seconds to cool down 50 heat points.

Gameplay: reintroduced variable cpu speed
Different CPUs can now go at different speeds, and be influenced by the installation of this or that module.
A lower CpuSpd value will mean a shorter interval between actions.

Gameplay: hit and damage chance on moving target
A walking, jumping, running, or ducking target will have a chance for damage to be reduced by a variable amount.

Gameplay: thermal and explosive damage properties
Weapons can now be modified to deal an amount of thermal damage, which increases the heat of the target by x amount, or equipped with explosive for a chance to deal critical hits (x5 times the normal damage).

Gameplay: aim correction
Turned the bots' joints this way and that to improve their aim over distance.

Bot Fitting: highlight item if not model compatible
Part of developments still to come, for now fitting a non compatible item on a chassis will highlight that item in yellow. I.e. fitting an Opensource part on a Seishin chassis.

Bot Fitting : unfit item
As described. Press the little [-] to remove the item from its slot.

UI: custom cursor
Again, not much to say.

UI: team lifebars
In Encounter, the team's advantage is displayed rather than their hypothetical lifebars. As one team prevails on the other, the bar will reflect this by changing color.

UI-Gameplay: feedback inflicted damage
A complement of a number of above mentioned additions, hitting a target will pop up text in the hit location describing the magnitude of the damage (hit, pierce, glance, critical).

UI: flycam prettification
A major element of this update. A bot's FlyCam now shows information on just about everything the bot knows about itself. Locks, distances, threats (in dev), heat and overheating, weapons status and ammo, and more.

UI: end encounter panel prettification
May not be the end for it, but it's a lot nicer than it's been so far.

Note: Weapons are in the middle of being updated with the new properties and rebalanced; right now most have the same exact stats, and some may be broken. I can however vouch for the MiniGun.