Read about our journey from idea to a concrete, tangible game, polished enough to showcase to the world.

If you haven't already, we recommend you read Part 1 first.

Good, now that that's over with, let's get started!

We started development around August 7th 2015, while we were working on another game project of ours. The scope of that game was big. Actually, looking back, it was huge. After long deliberations, we decided it would be better if our first game's scope was a little more down-to-earth. Besides, this would provide us with an early, fast opportunity to experience the entire creation of a game, from concept, to prototype, to production, to polishing, to testing, to marketing, to release in a relatively small timeframe, with minimum risk. And should our project fail, it is better to fail a small project than a big one. This is not to say Boltus is not important to us, on the contrary.

Being our first project, Boltus represents our entire passion and dedication for making games, our desire to bring something new to the market, not just another entry in some over-saturated genre.

Our goal was to get create a marketable, polished game in four weeks. We failed.

From minimum product to polished game in only six weeks

It took us six weeks instead of the planned four to get from no game, to game launched on Steam Greenlight. We had a lot of comments praising our development speed, and that really helped motivate us even more.

Helen was working on and off during the weekend on our graphics, while I was programming mainly during weekends, while sneaking in some more work in the morning by waking up at 6am and working until about 9:45am, when I had to leave for work. If you have a job? This is the secret that worked for me: wake up early in the morning. Best time for programming, and possibly any mental activity, is when you're fresh, and my productivity then is off the charts.

This was our minimum viable product. Although it isn't the prettiest sight to behold, it was our baby. It showed potential, the mechanics were there and were sound. One major design then was different from now: you controlled a small pad that would "blow" the ball with a plasma wave towards wherever you pointed. Then the ball would fall back and you would direct it someplace else. Also, there was scoring.

The full-on above perspective wasn't working too well and it was restricting the size of the board a lot. We decided a more slanted perspective, like pinball, would be more appropriate for our needs. Also, we had our pad graphics and our wall bumpers graphics (the small green things in the middle of the board) updated.

We decided to take advantage of the extra space the new perspective gave us, and went a bit crazy with the level design. The two yellow long parallel walls in the image are actually a collection of small individual walls that can be toggled down. We introduced a new mechanic called a tag. A tagged object can then be activated, and it will perform its function, whatever that is. A wall would toggle up and down to allow you to pass.

In our original design, tagged objects could be activated by hitting and turning on all three wall bumpers on your side of the terrain. We later decided that mechanic was too repetitive, because a lot of objects in the level needed to be toggled.

This is also when we introduced boosters, that when toggled on, propelled you in the direction they pointed. This, combined with the toggle-able walls provided a lot of flexibility to the level, allowing players to shape the level as they saw fit and to make strategical actions by enabling and disabling different parts of it.

It was time to make things pretty. And so we did. Helen took care of the level art, while I programmed the special effects like the energy shield and the black hole procedurally generated textures.

Aspect is very important to the presentation of a game. It is like a business card. It shows the amount of effort you are willing to put into the game, how much you care about it.

After being done with the energy shield, I started tackling the black hole graphic. A bit of background, the small, black holes in the game attract the player's ball, and you can orbit around them. Making the graphic for this was tough. Because of the curved trajectory nature of a black hole, programming an animated, seamlessly looping texture proved considerably more difficult than the energy shield. In the end, patience prevailed, and the result was satisfying.

During the weekend, once we had everything, it was time to put it all together. So we worked on the existing level a bit, moved each player to opposite sides. Everything was looking nice. It was time to implement split screen.

This would completely eliminate the constraints on how big a level could be. And it did. The result of this week was amazing. We went from looking like 4 year old's doodle in Paint to an actual, presentable piece. We posted our game on Facebook and Twitter, and were contacted by a couple of sound studios as a result. All because of the presentation factor.

Still in full gear from week 4, we decided our game needs to improve it's "feel". We organized some playtests and found out the areas where we could improve. We added text feedback when you damaged something, when you healed, when you toggled objects, etc. We also increased the number of bumpers. The game instantly felt more rewarding.

After a bit of research and looking into amazing free sound effects programs like sfxr, bfxr and LabChirp, we decided to go with LabChirp for our sound effects needs, since we could generate non-chip-tune sounds with it.

Then we decided to add a new mechanic, charges, which you would accumulate by hitting your own bumpers, and then use that charge to damage your opponent's bumpers. You could also spend charge to place mines: snare mines and explosive mines. Or you could spend the charge on a skill called Shockwave, that would either diffuse mines by detonating them from a distance, or it would propel your opponent out of your face.

We also needed a new level design. Perhaps I should show you one of my first drafts. 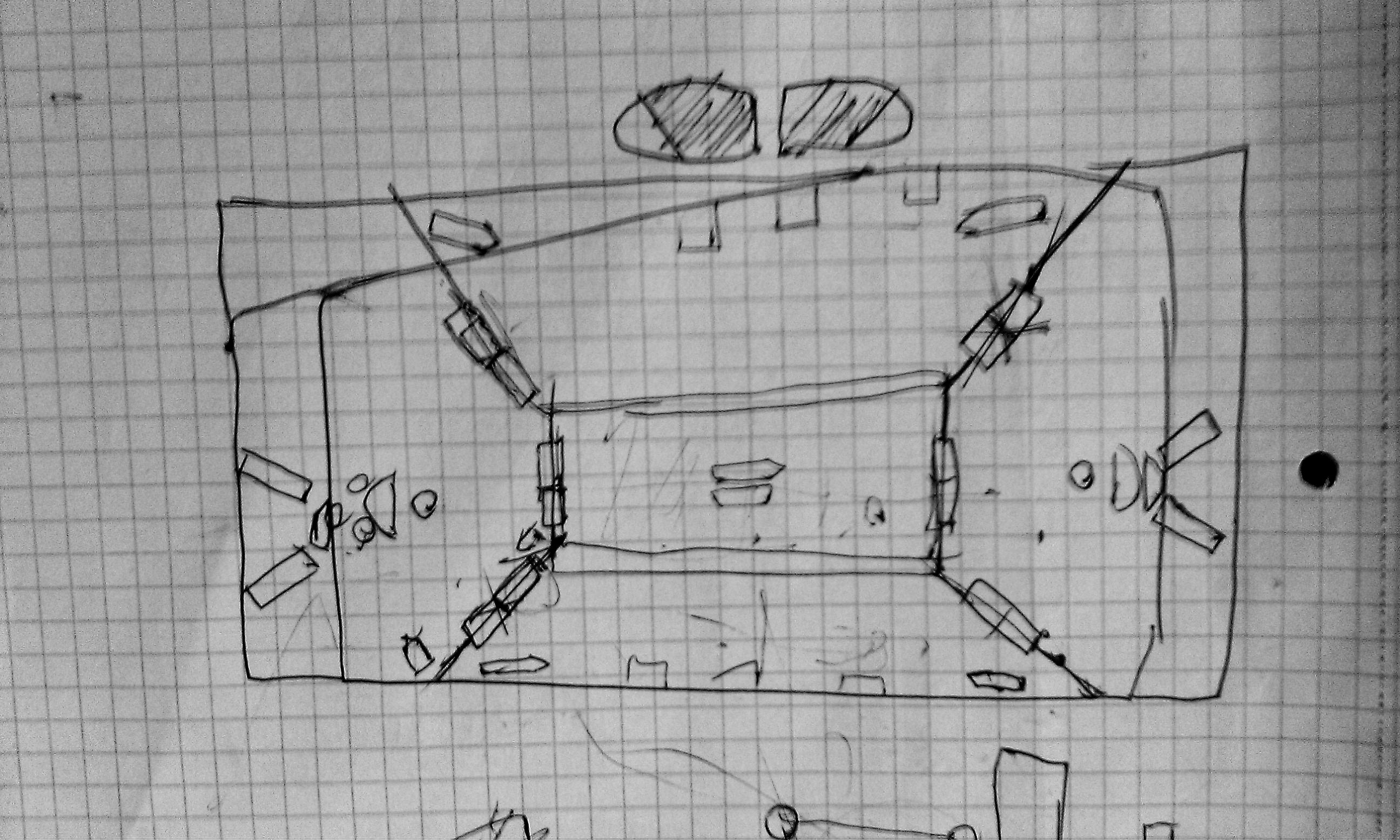 In the end, we decided to go with a bit of a less boring layout: 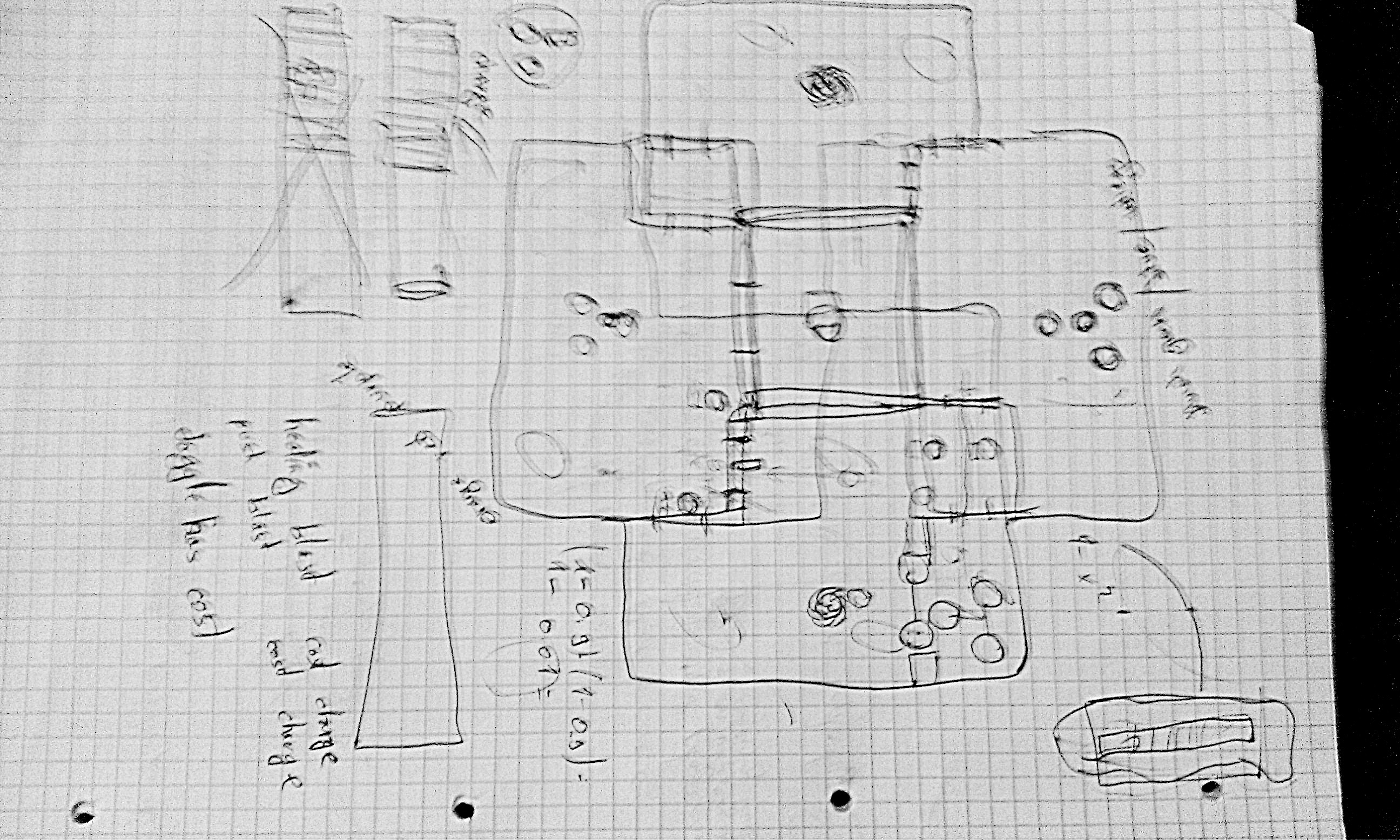 We scoured the internet left and right to try and find a good sound track for our trailer. In the end we found it and licensed it. It was perfect, and all the people we've asked picked it from our selection of candidates.

With the soundtrack licensed, we started working on the trailer, we recorded the footage and then started shaping it into what would become our trailer. I felt it would be great if we could time the footage to the beat. So I listened to the soundtrack by itself over and over again, and outlined on paper the most significant parts of the song, any changes in tempo, beat etc. The result looked like this: 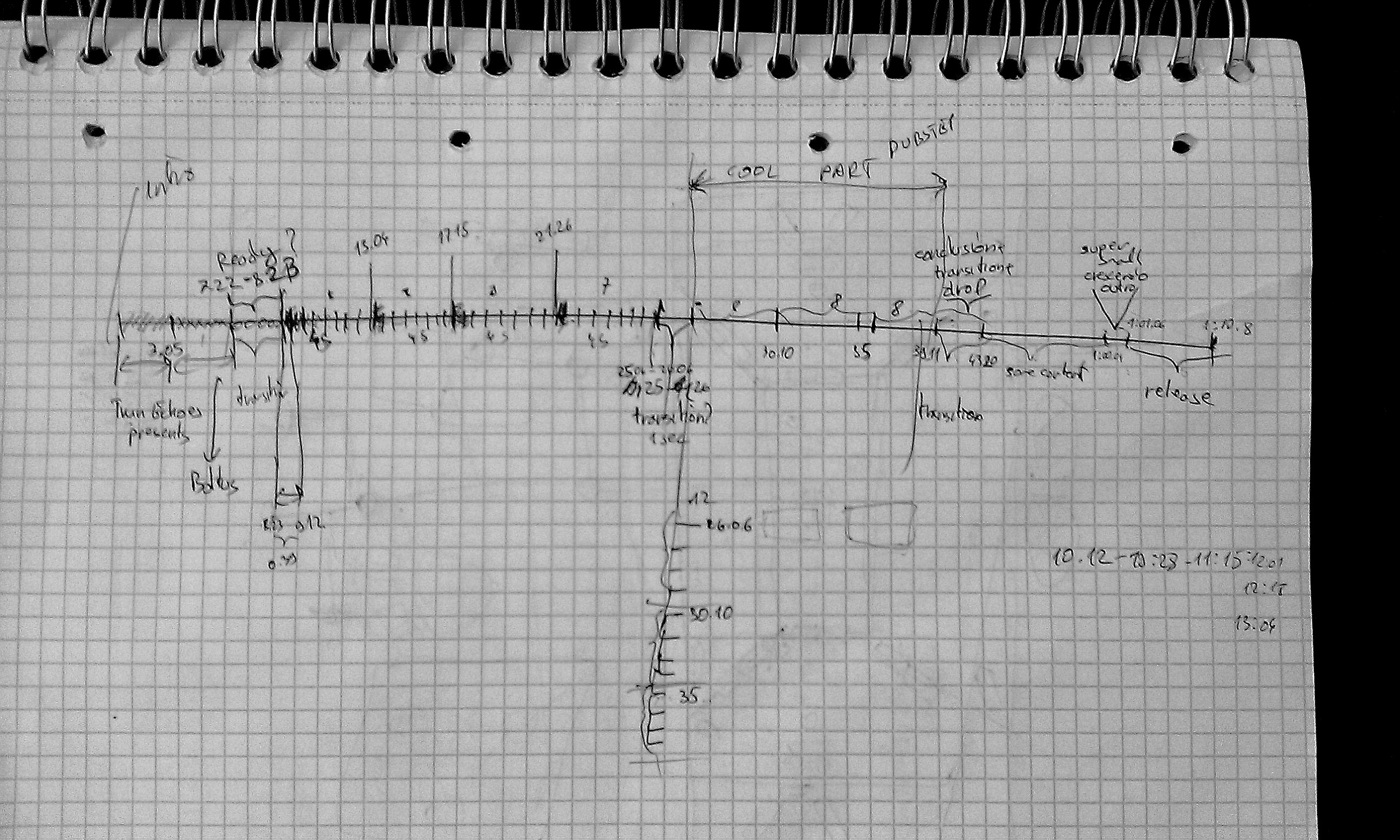 Then I started marking areas of our footage where to go in the soundtrack timeline, depending also on what the bits were showcasing. It took an entire week to get the trailer ready, and I consider it the most difficult part of the project to this date.

In the end, we managed to finish the trailer at the end of the sixth week, and we were so excited to finally launch on Greenlight! Our first game. Our first trailer. Ready to face the masses.

This brings us to the time of writing this article. Our game has been on Greenlight for 3 days now. It has been an exciting journey for us thus far, and we look forward to what's to come.

Stay tuned for our next article, where we will discuss how the Greenlight campaign is going, and our thoughts on it. In the meantime, please vote for us on Greenlight and help us get Boltus on Steam: