And now to round off the Blue category of weapons, we'll take a closer look at Machine Guns.

Are you tired of forcing yourself to slow down in order to fire more projectiles than the NYPD? Are the spread of Scatterguns just not cutting it when you need an enemy across the room to be so dead, so now? Well then, you’re in luck, strange demented individual that can relate to these, Machine Guns are just what you needed!

Rounding out the Automatic Blue category of weapons, Machine Guns allow for the player to continue at the high speed pace of their dreams, provided their dreams include firing lasers faster than a strobe light at a party (I have been told there are strobe lights at parties). These feats of agility come at a cost however. Machine Guns will, on average, possess a significantly lower damage per second than their Gatling cousins, meaning that you need to fire just a bit longer to get those bullets directly to your enemy’s waiting facial/pelvic regions.

Lets start with something simple shall we? 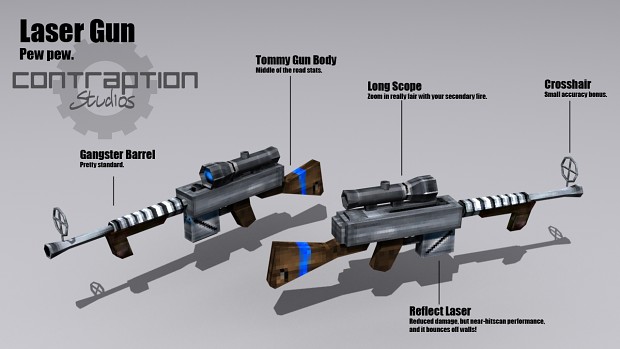 When I said simple, I meant lasers. Not just any lasers though, these are special Reflector Lasers. Should the player be unlucky enough to miss everyone they just tried to shoot at, the Reflector Lasers gives you a shot at redemption, bouncing off non-enemies once before fizzling out of existence. Other than that, this gun looks like it could have made its home 70 years ago in the 1920s, outfitted with a classic Tommy Gun Body and Gangster Barrel. For even more accuracy, a crosshair has been mounted at the end of the barrel, as well as a Long Scope mounted to the body. The Long Scope uses your Secondary fire to zoom into targets from long ranges, at the cost of some speed. 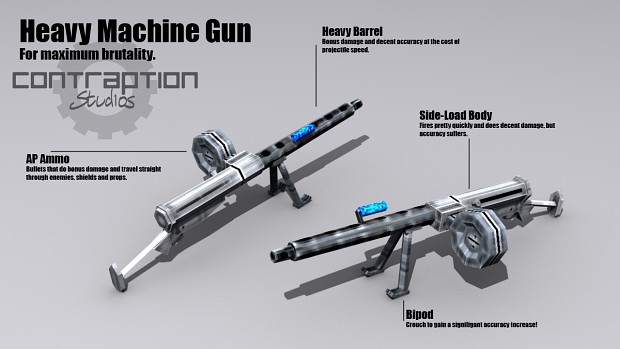 Next is this Heavy Machine Gun, for maximum brutality. This gun is equipped with everything that will make a Nazi-Communist lie awake at night. While its Heavy Barrel decreases any hope that you may have previously held towards projectile spread, it deals more damage than normal. Further, its Side Load body increases the rate of fire, but forces the gun to be slightly less accurate. AP Bullets are the ammunition of choice for this gun, capable of shooting through armour, props, and even enemies. The Bipod is just icing on this gun-flavoured cake, increasing its accuracy by huge quantities while the player is crouching. 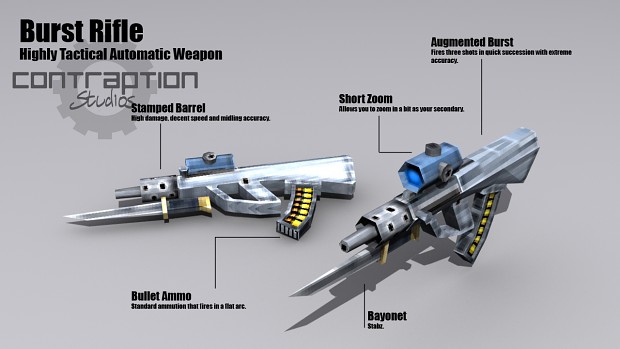 Finally, we have the Burst Rifle, with America’s favorite attachment, the Bayonet, which like it does in many of the other gun classes, skewers enemies that decide to stand near you. Its Augmented Burst Body fires three shots in quick succession with supreme accuracy, while the Stamped Barrel ensures that each of those projectiles, standard bullets in this case, will tear everything they find. Rounding it out is the Short Zoom secondary attachment, which functions similarly to the Long Scope, but with a smaller zoom distance in exchange for not slowing you down.
With that, we round out the Automatic category of weapons in Bloodcrusher II. These guns will be more than useful in clearing every room you need to walk into.

And of course, remember folks! We will be hosting another Contraption Cast Sunday at 8 PM, EST. Tweet questions for us @Bloodcrusherii, or just stop in to ask them in the chat. We can’t wait to see you all there.

Holy mother of all things holy.

I can't wait to get my hands on this game

You seem to like bayonets. Maybe I should add some to my mods guns...

Amazing. I need this game.