Added some junks to the game. Blocking, throwing, alt colors and probably a lot of other junk. 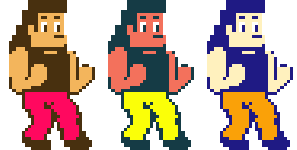 Alternate Colors
Added the ability to change colors of the dudes. Put a few different palettes in there, but only two colors are usable. I haven't added the ability for the user to pick colors yet. It just gives 2P a different color when both players pick the same dude.

Throwing
Wow throwing is probably the hardest thing I've had to add to the game so far. Let me tell you what my throw looks awful too, but it works for now. Works like throwing in most fighting games. You can throw the other player when they aren't in Hit or Block stun.

Projectiles
Just adding the capability to throw projectiles to the engine for now. I am not sure whether there will be much fireball throwing at this point. For now the dude can shoot a duck out of his hands...

Other Junk
Added DX controller support because XNA only lets me use Xbox controllers and that blows. Used SlimDX to do that and it caused a massive memory leak which took a day to figure out... Also did a bunch of other things which I can no longer remember or can't think of at this time.

Here is a video showing most of the changes. I forgot to do throwing and probably some other things in the video and I'm too lazy to make another one. AND sorry I am also too lazy to edit :(