Now that we have thousands of games played on every patch, and we have so many new players joining the game every day, we really need to make sure that our changes are solid. If we mis-step, it can result in a lot of painful games until we get the next patch out. But if we don't do anything, the game can get stale as the latest best strategies grow in popularity and tend to be played the most.

We just released Build 231 on Steam. We keep cranking out the patches, to address some issues that are still popping up. We just noticed that Explore Mode wasn't working...oops. So we fixed that and queued some other balance changes as well. Speaking of balance, I wanted to take a moment to explain a bit about these particular changes, as well as our evolving balancing process.

Many players are concerned with us not taking their input, or only listening to public players, or only to competitive players. This game needs to be balanced for both, so input must be taken from everywhere and reconciled. There is also the experiential and intuitive aspect of balance, where something doesn't "feel" right, and also the statistical aspects: we use comprehensive game stats to see when certain weapons aren't behaving well, or when lifeforms become weak or hard to play (by watching average lifetime by build), etc. So this input comes from many sources.

Finally, we are starting to test proposed upcoming balance changes through Steam Workshop. I have a mod up there which you can install and play on your dedicated server. 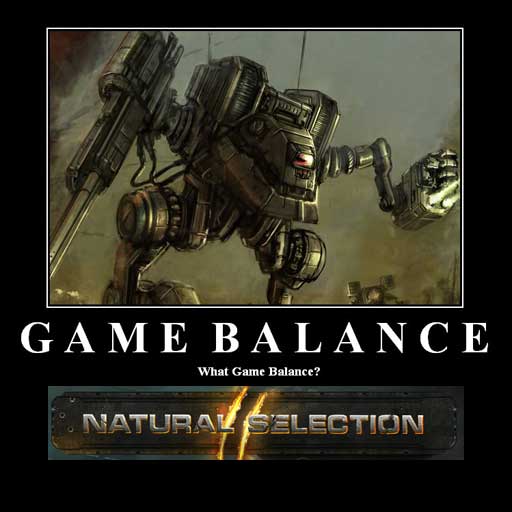 Last week I posted a Survey Monkey survey there, which asked very specific questions of players, as well as asked them how many games they had played on the patch. This was invaluable for the changes in 230, and it prevented us from releasing a couple changes that probably would have been quite bad (noticeably, increasing Lerk health). So after all the feedback is taken from public and competitive games, our comprehensive stats system, e-mail, forums, changes are planned added to this mod for testing.

Finally, I wanted to give some of the reasoning behind the changes in this build. General balance has been improving a lot at the competitive level, but it's not great on pubs. I believe that competitive play is a microcosm of pub play, and that it's not a smart move to have two different versions of the game, balanced for each side. However, there certainly are differences between the two play-styles, and this patch's changes are addressing pub play directly.

There seems to be a lot of Shade and Crag spam in hive rooms in pubs, making it quite hard for marines to kill hives. Cloaking and Regeneration also seem to be too easy to use, giving Skulks especially a large advantage against equally skilled marines. So these changes are here to help address these problems in particular.

So that's the current state of affairs for our balancing process, and it will no doubt continue to change as we learn more about the game and continue adding to it.

This balance began to swing towards the aliens after the first week, without us making any changes to the game. This is a fascinating phenomenon in game balance: As the community gets better at the game, you become better at exploiting wrinkles in the fabric of its design. The discrepancy continued to widen to an unacceptable 40% marine wins.

Charlie has been watching the balance situation very closely - Consulting, playing, watching and pondering. The following changes have been tested over the past few days and should go a long way to nudging the pendulum back towards the marines.

Behind the scenes, Brian, Max, Brian, Dushan, and Steve have all been working very hard to fix bugs, speed performance and improve the Spark Engine. This is an ongoing process and never stops. UWE is not working on any other games right now, our full attention is on NS2 and NS2 only.

Since release, we are confident we have fixed many very serious bugs that have been stopping people from playing. However, we know there are still some bugs out there that haven't yet been caught. Under the hood, Build 229 and 230 make it easier for us to identify and diagnose problems. We will to seek out and destroy any naughty* bits of code that are preventing anyone from playing.

We are having a total blast continuing to improve the game for you guys, and we really appreciate you taking the time to report bugs, comment on balance, and most importantly: Frag each other (and us!).

All the cool kids are doing it.

Thanks for the feedback and stats. I feel the aliens kick butt on most matches, but I don't mind the challenge of playing marines.

I like being challenged, too. But I kinda get frustrated fighting in more or less decent and equal teams and losing 9 out of 10 times. At least that was my statistic in the last 30 or so games.

Marines take up lots of their own firepower when expanding, so their expansion can be interrupted more easily. Since Aliens have an easier time to expand they tend to get their three Hives more easily than Marines, and if Marines can get the third point they have trouble holding that expansion because they have to juggle their resources more than Aliens do. It might help to increase resource cost for some Alien structures and researches so Aliens cannot use their ground advantage as much.

On that note, I get the feeing that Marine defense falls flat a little compared to Alien defenses. The Sentry turrets only shine early-game and are outperformed by anything above a Gorge. Mines do a great job, but are only a temporary solution. I won't ask for a bfg, but somethng that gives you a precious minute or two to hold your second Command center till you can throw an Exo into your defense (Not even for firepower, but for that tiny armor advantage compared to stock marines). The Aliens have a wall that can pop out of nowhere, maybe Marines could get an extended version of that Marine-armor-buff-commander-ability, some kind of shield they can put around an area. Holds 10 seconds or until the Aliens knock it down, gives sentries and players some time to dish out damage. Can be dependant on a structure, or use a structure as centerpoint. Needs power and costs resources on any activation. If it's a structure, maybe players could activate it using their own resources.

Otherwise a great and enjoyable sequel. I hated playing aliens in NS, but I really like both sides now. I also like that you attempt to balance it for both public and competetive gaming. Don't go nuts trying to do that ;).