Our previous post here on IndieDB was in february. Don't worry, we have been working hard in the meantime. After the Beta v.1.2 we've been mostly focusing on the second world, or the sand world, as we like to call it. Monsters are pretty much done there, except we still require some graphics for them. Second bossfight is also on it's way, although it's still very rough but we hope we can bring it to you for testing in a couple of months.

Some changes occurred regarding our team members. Our lead artist and one of the programmers had to leave the team so that obviously slowed things down. Fortunately we found new artists quite soon and our two programmers are handling their stuff very well. You can check our updated team page Gerty-game.com if you’re interested.

Ice golems - A new monster type that hides in the terrain and ambushes unsuspecting adventurers with their strong attacks.

Runes - Three runes are found around the level. When player activates the third one, it spawns a horde of monsters. If the player is rambo-like enough and kills them all, he/she will be rewarded with an item drop.

Monument - Ancient alien monuments are a great way to spend extra juice. There are two bigger rewards and a limited number of activations. Also destroying the monument will result as a penalty. So no touching!

Teleporter generator - In some levels the player needs to activate the generator before they can use the teleporter. The generator is protected by two strong plasma cannons. Caution is recommended around these bad boys.

We got some nice constructive feedback from feedback friday on /r/gamedev and we’re really thankful! People complained that the combat didn’t feel impactful enough. We then adjusted the sound effects on Commandos pistol, added some new effects on enemies and the player character when they’re hit and I must admit it feels a lot better.

We’ve received feedback on the hazard spawning mechanic, which is mother worms in world 1. It was hard to notice that the spawning rate gets faster and faster the longer you spend on the level. It’s a mechanic to force players to move to the next level. We then decided to add a countdown indicator to the HUD that informs about the next hazard. Also a slight change to all the text in the upper right corner. 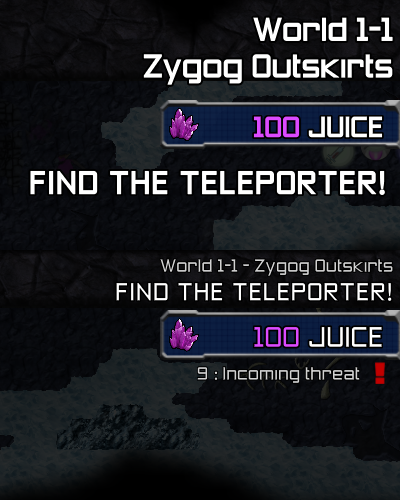 We had pretty massive balance changes also. The experience gain curve has been toned down, enemies now move faster and the player digs faster. Co-op mode has an option for item sharing now. This way if you are a chronic hoarder, your buddies will also get items! The respawn times were adjusted and a dynamic zoom was added for co-op.

Check out the changelog for more detailed breakdown.

We needed a new video to show all the updates so here’s that!