If you haven't played Gerty yet, now is a good time to do that! In this build we got some major improvements on Main Menu, Game Over -screen, level changes, Boss fight and player inventory.

In the previous build we gave the main menu a visual upgrade, but were left with some issues with usability. We hope that this build should take care of all of them. Touched up the UI here and there, improved the navigation and added sound. This is how the options looks like now: 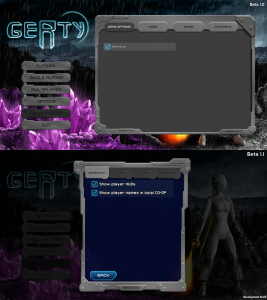 We added a short teleportation animation to both in and out of levels. In the between we added loading screens to display a variety of gameplay tips and to provide a natural breather.

New background for your items in the inventory! Some tweaking to be done, but we're happy with the new look for now.

After we released our previous build, we found a huge bug in the boss fight! The bug caused the boss to just start walking in place, not even attacking. Fortunately that is now fixed and we were able to add other great improvements to the Boss as well! New audio, some new graphics, rebalanced the fight and so on.

Since most of the demo content and features are starting to be ready, we're going to start moving our attention to working on the rest of the game. Bug fixes will be done, but major improvements and changes to the demo build not so much.