Friday summary of work done on Simulacra for March, the week of the 4th. Update info on new map work, start of player character modelling, and a UE4 blueprint tutorial on seeded variation inspired by No Man's Sky.

Posted by JoscelinFrost on Mar 4th, 2016

March is definitely going to be a busy month, I'm flying to San Francisco to go to GDC and taking care of a bunch of other things. That being said I still loaded up the schedule as much as I felt comfortable with for this sprint.

The emphasis this month is on getting more content in and hooked up, to put the systems and mechanics to the test and really flesh out the game. Paired with that are some possible work flow improvements, more on that below.

I decided to forgo a build release today, I'm hoping to get a bit more of the work from last months sprint properly integrated into the flow of the game, rather than just working in a test scenario. To give a bit of insight into the construction of the game and keep releases varied and fun, I recorded a short tutorial video. It covers the use of variation "seeds" in the game to produce predictable procedural content. This was largely inspired by No Man's Sky which uses this idea to grow full planets, my hope is to use it to randomize locations and missions. Ideally when you start the game, maps with have their encampments and other such things randomized, so each play through is fresh and interesting, but you can learn the lay of the land in each run of the game. Let me know what you think and if there are any topics you would like to see in future videos.

As I am trying to flesh out more content for this sprint, I have started developing the shoreline map beyond just a placeholder space so it can continue to develop in parallel to the main wilderness map. In order to give future maps a jump start I have started trying out using World Machine to generate new layouts. From world machine I can easily shift large landmass around and try out many options quickly, generating all of the height maps to sculpt and paint the landscape. I don't intend to push this all the way to completion, just to get a loose sense of the space and layout. It will also make it easier to generate similar maps that are meant to share the same biome. I have yet to try the Open World tools developed for the UE4 Kite demo but am hoping I can use those as the next stage to "grow" various foliage around the map. Hopefully these tools together will allow me to get new maps up and running faster so I can focus on the local gameplay and storytelling. 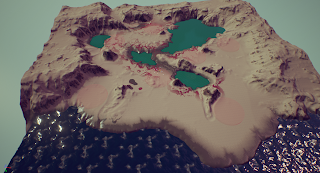 Next on the agenda is character art! One of the large missing components of the current pipeline is character art and animation. So I'm trying to rectify that by starting to model the main character and look into rigging options. The render below is the VERY early hi-poly model, which has most of the larger elements blocked out but little to no detail and still missing a lot of the connecting pieces. The most developed elements are the cloth torso and arms, I altered a base model and draped it using Marvelous Designer, pulling it back into Zbrush for cleanup. Still a long way to go on it but happy with it as a start. 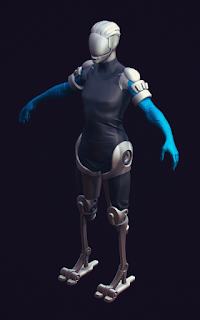 Have a great weekend everyone! - CJ