This is another small scale progress update, just to keep you informed about some of the stuff we have been working on, and to show you that we are still alive. Please note that all of the stuff we will be showing you today is heavily WIP, and much of it is just a placeholder. 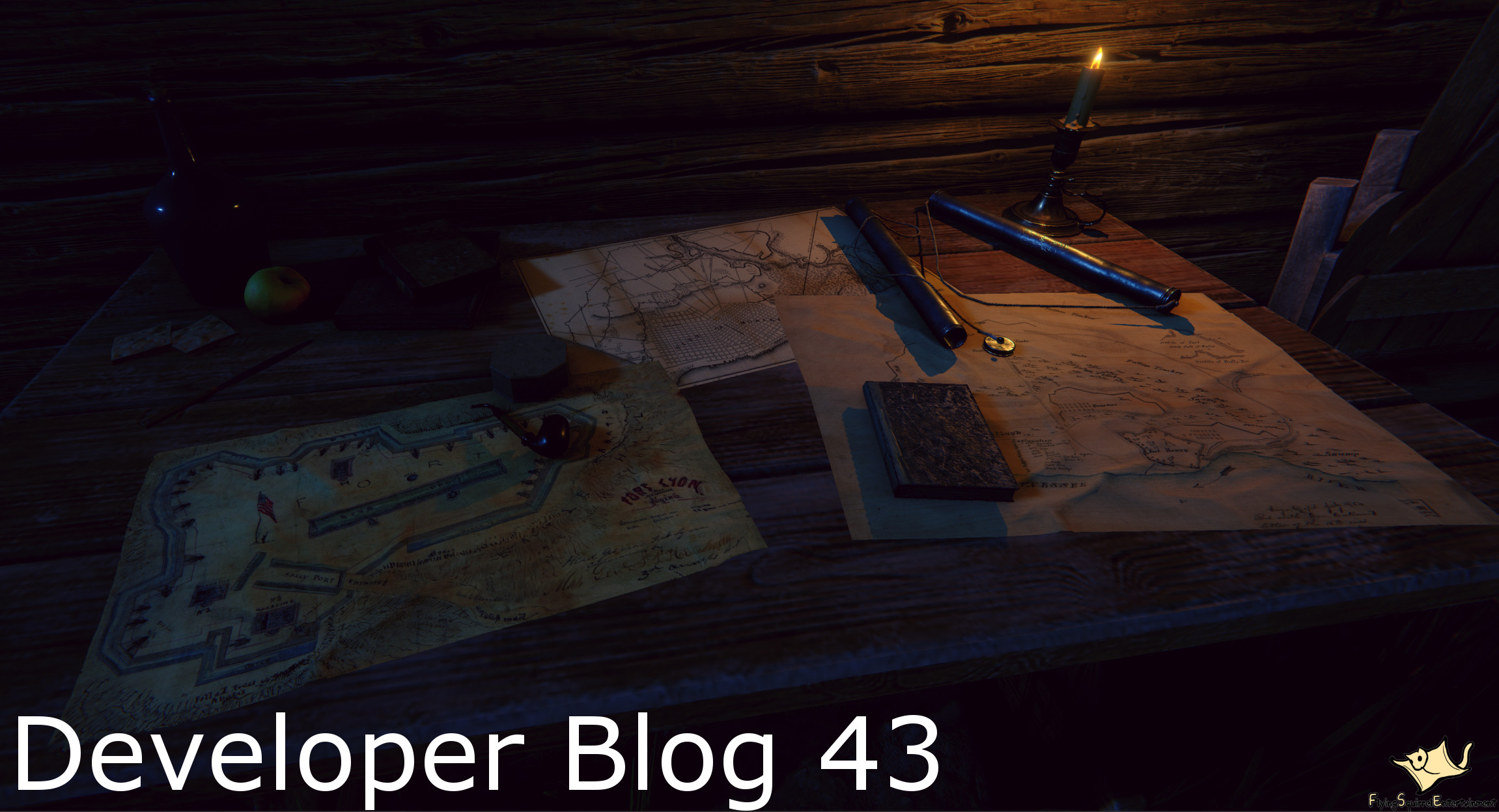 Hello and welcome back to our Developer Blog. This is another small scale progress update, just to keep you informed about some of the stuff we have been working on, and to show you that we are still alive. Please note that all of the stuff we will be showing you today is heavily WIP, and much of it is just a placeholder.

Confederate Gear
Admiral is still working on more confederate equipment. He has finished a large number of items since the last blog, but we want to highlight just two of the backpacks that he has made. The renders below show only a small number of available variations for each knapsack.
We suggest watching the videos in 4k!

Kibbler Knapsack
If you come across a civil war relic and it's title includes a surname, there are two possibilities: it either marks the company that manufactured or supplied the item, or the original owner of the relic. In case of Kibbler knapsack it's the latter option. James Allen Kibbler served in Company F, 10th Virginia Infantry, and during his service he used a particular single bag soft knapsack which was a copy from U.S. Army knapsack design used during the Mexican War.

The Kibber knapsack is made of waterproof canvas with a single bag and a long flap which is used to wrap the blanket in. Both elements are closed together and attached to the shoulders via a pair wide of russet straps of special design. Originally intended to be wrapped around the bag and blanket flap in parallel lines, the straps were often crossed: some say that it prevents the construction from sliding off the shoulders. Likewise, many soldiers chose to simply press their blankets to the bag with folded blanket flap instead of wrapping it around the blanket. 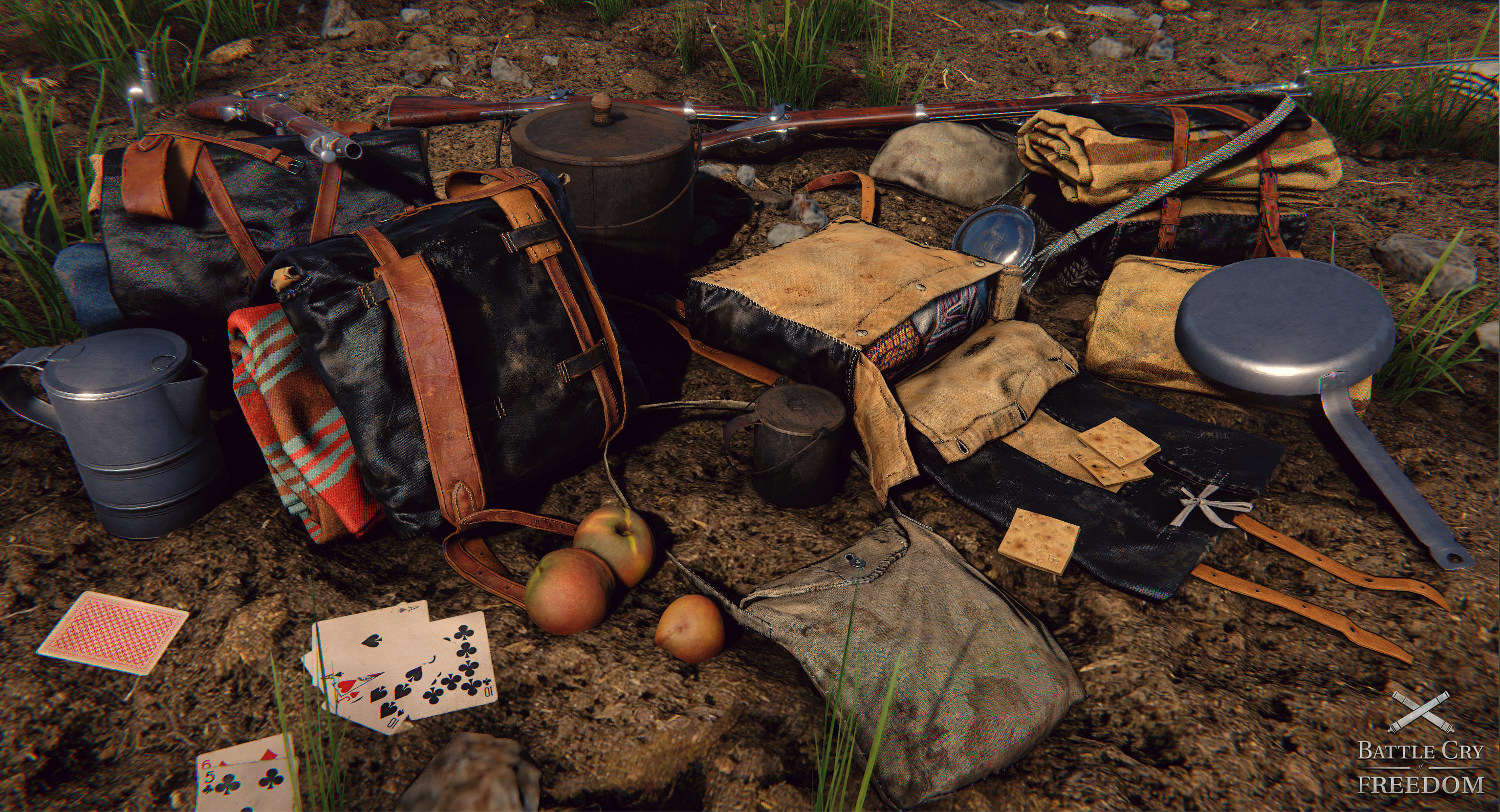 English Pattern 1856 knapsack
The English Pattern 1856 knapsack, also commonly referred to as Enfield-pattern knapsack, English import knapsack, or Isaac&Campbell knapsack, is a box soft/rigid knapsack model designed for and used by British troops. A shortage of material and production capabilities forced the Confederate government to turn to Great Britain as a source of high-quality military goods. Although the British government wouldn't officially trade with the Confederacy, it wouldn't prohibit private companies to conduct such trade either. Thus the confederate goverment was able to procure military goods from companies that would normally supply the british military or happened to own large quantities of surplus military goods of outdated models.

The knapsack itself is a single bag of waterproof canvas with a flap towards the wearer's back. The corners are reinforced with thick leather patches and the rear flap is additionally stiffened with a special wooden stick passed through three leather loops and used to secure the shoulder straps that would be fastened at the bottom of the knapsack.

The british-issue knapsack would include a square inner frame made from wooden planks that make the knapsack rigid. Unlike other rigid knapsacks of the time, however, this frame was not permanently attached to the knapsack and could be removed. Despite the fact that most of the contract knapsacks were delivered with frames, it is widely believed that most soldiers would throw them away and wear their knapsack without the frame. 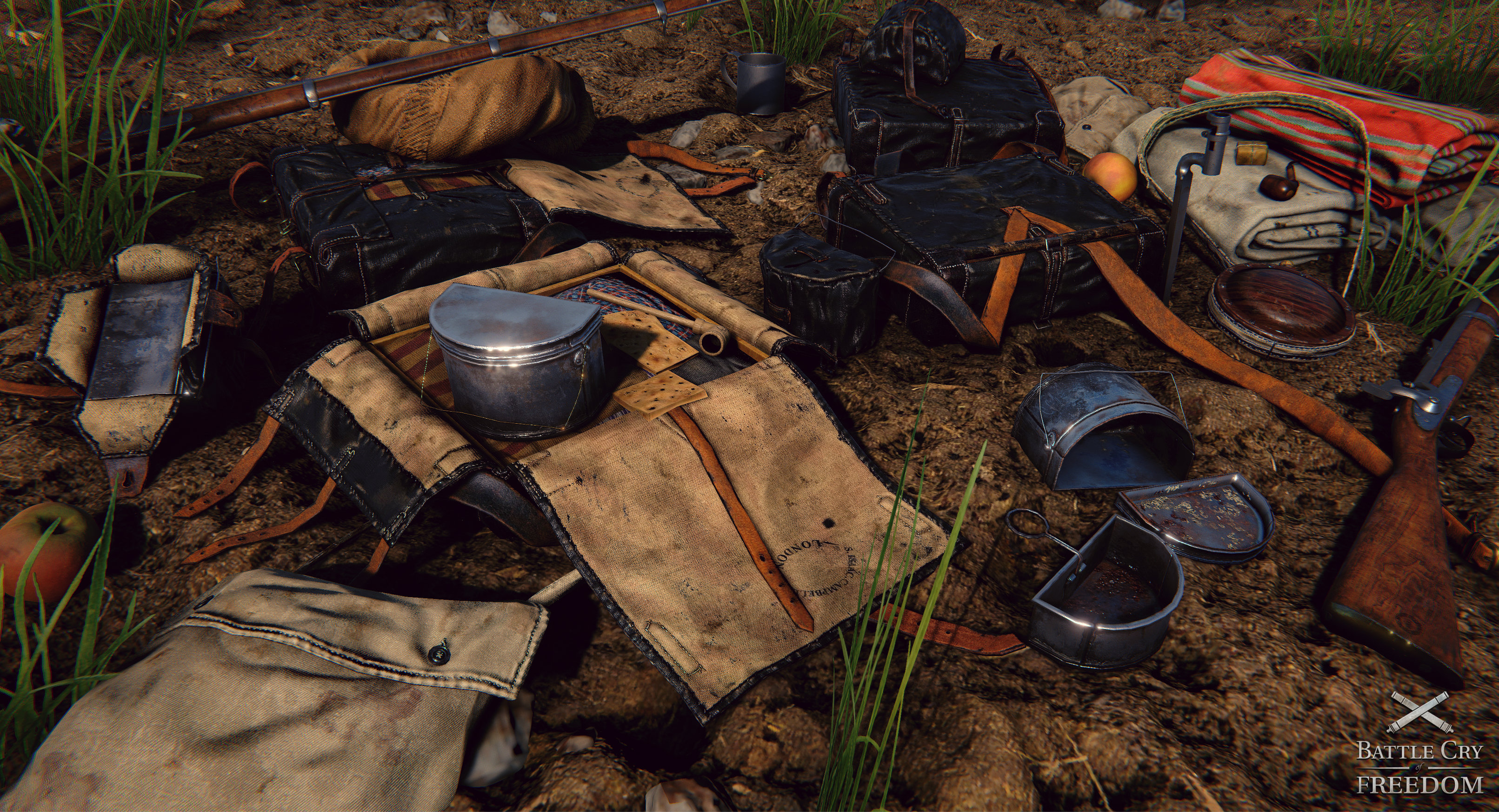 All knapsacks were issued with a pair of straps that would be used to fix the folded blanket to the rear side of the pack, however, there's practically no evidence of them being used. Either way, on most depictions these straps are not used at all, with soldiers managing to press their blanket in between the compartment and the knapsack flap. As you can see, we made both options available. The last part of would be the english mess tin. Composed of three separate parts, a cover of tarred cloth and a special strap to attach it to the top ( or sometimes hang it from the back of) the knapsack, these mess tins were immensely popular among all ranks of the Confederate army.


Sapper/Pioneer System Improvements
We have continued work on the Sapper System and added many more constructible items. Additionally, we added new placement sounds as well as explosive barrels. We believe that the current Sapper system is pretty solid, as it is fast and easy to create defensive works. Below is a video of us showcasing how fast a single Sapper can construct a fairly sizable defensive work. Please remember that the UI is work in Progress.

Just like in our previous game, Napoleonic Wars, Sappers have the ability to plant explosive kegs/barrels that can be used to blow up enemy defensive works, doors, or anything else that can break. However, we added a fuse timer setting to the explosive keg, which means that Sappers can now decide for how long the fuse will burn before the keg explodes. We added a minimum fuse timer of 8 seconds to prevent abuse. (Sorry Betty...) If a player manages to destroy the keg before the fuse timer runs out, the keg will break and it will not explode.

Server and Admin Tools/Settings
We know how important proper and easily accessible Admin tools are for running a good public server or a Linebattle. As such we have spent some time on implementing various Server Settings. All Server settings can be set using a .ini file in the Server Files. Additionally, just like in Warband, any Admin can change any of the settings using the Admin Panel in the game. Any of the settings can be changed and applied in real time. We do not plan on adding console commands, as changing Server Settings using a User Interface is easier, faster and more convenient. In addition to the Server Settings, we have added a server log like the one we had in Napoleonic Wars. It logs everything important that happens on the server and will help with admining the server. The log can be access by anyone on the server. 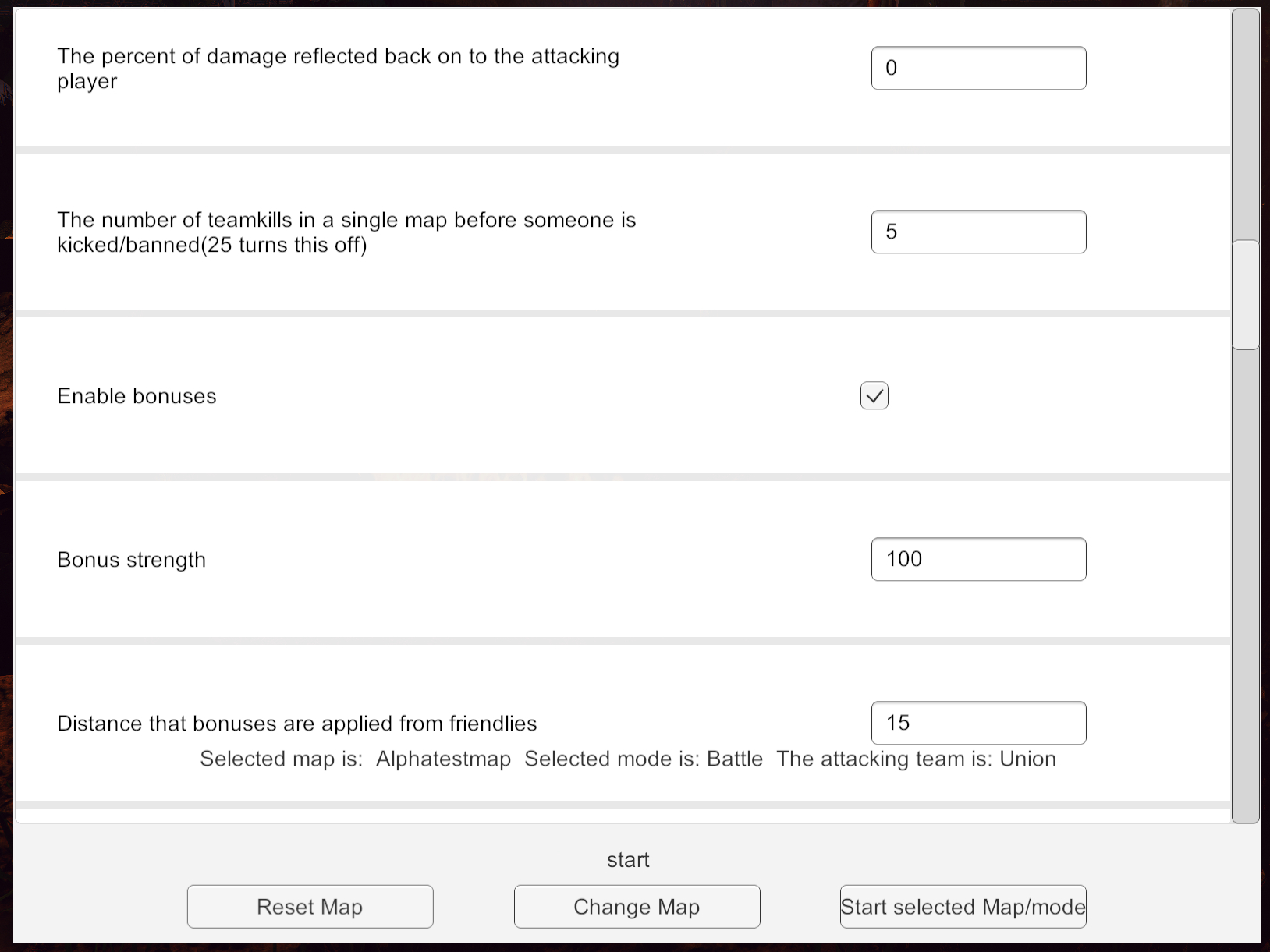 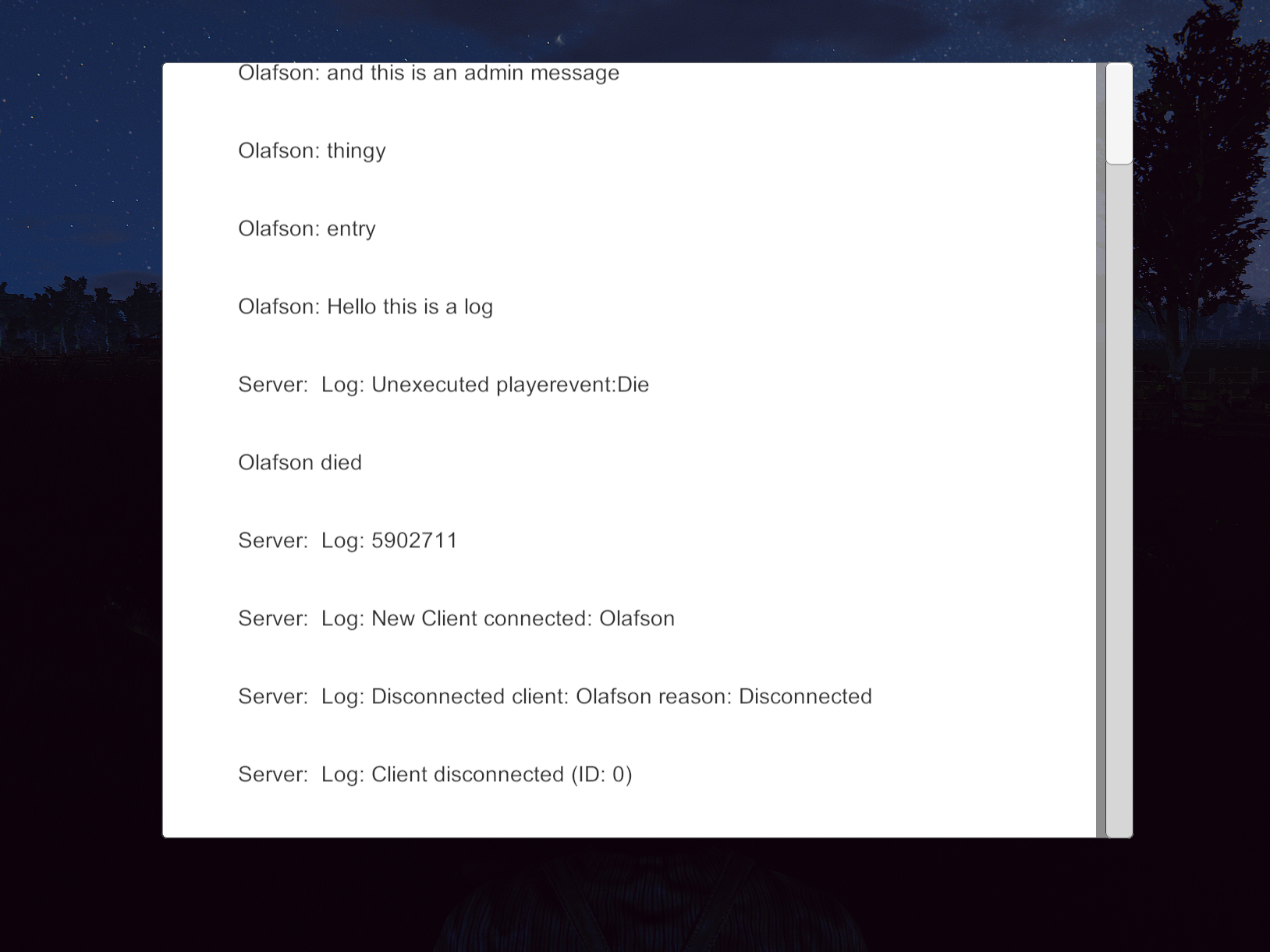 We have also added various Admin Tools that can be accessed by the Admins on the server. The new toolbox includes various search and filtering functions which can be accessed using a drop down to the right of the player list. For example, the player list below is sorted by Faction, with Union in green, Confederates in red and spectators in black. Admin abilities, such as kick, ban, slay, teleport, god mode etc. can be acccessed using another drop down on the right. The list does not update automatically, as we found that with many players, a constantly updating list becomes unmanageable.

In addition to opening the Admin Tools from the Esc. menu, we have programmed a new features that will make admining a whole lot easier. If logged on as Admin, the Admin can press "I" and then click with his mouse on a player to immediately select the player in the Admin Tools.

Musician Class Update
We have just finished recording an all new set of Fife and Drum tunes. These 22 new tunes were recorded with the help of the United States Army Old Guard Fife and Drum Corps and will be available to the musician class of both the Union and the Confederate States.

Usually we would show you previews of these fife and drum tracks, but instead we have something quite unusual for you today... We have just released an album of some of the fife and drum music that will be featured in Battle Cry of Freedom to Amazon, Apple Music and Spotify.

Gamemodes
Thunder has spent the last few days working on the gamemodes, finishing them off. The game now features eight different gamemodes.

-Battle
Every player has one life per round. To win, kill everyone in the enemy team before time expires. The round ends in a draw if time runs out.

-Siege
The attackers must capture the key point before time expires. Optional capture points can be captured to acquire spawns closer to the key point, but do not count towards victory. Defenders have limited amount of lives.

-Team Deathmatch
Kill the enemy team until your team reaches the necessary score to win. When time expires, the team with the most kills wins. If tied, it is a draw.

-Deathmatch
Everyone is the enemy, kill them all! The player with the highest score wins.

-Duel
Find another player and challenge them to a duel.

-Capture the Intel
Capture the enemies Intel and return it back to your base. The team that reaches the necessary score first, wins. If time expires, the team with the most points wins.

-Conquest
Capture flags to build up points over time. Reach the score to win before the enemy team does.

-King of the Hill
Whichever team captures the key point in the center of the map first, wins. If time runs out, its a draw.


New Tools
We also added a bunch of new tools and two new weapons to the game. In total we now have 126 usable items in the game, with more to come. Most importantly, we added binoculars to officers, which can be used like the spyglass in Napoleonic Wars, however, unlike in Napoleonic Wars, binoculars severely limit the field of view.

Officers also received a second item, a small whale oil lantern. The lantern will help to illuminate dark nights and dark places, and is especially useful inside buildings. When dropping the lantern, it will place itself upright on the floor, which will allow players to place them next to artillery position or defensive works and illuminate them without the need to constantly hold the lantern in the hand. 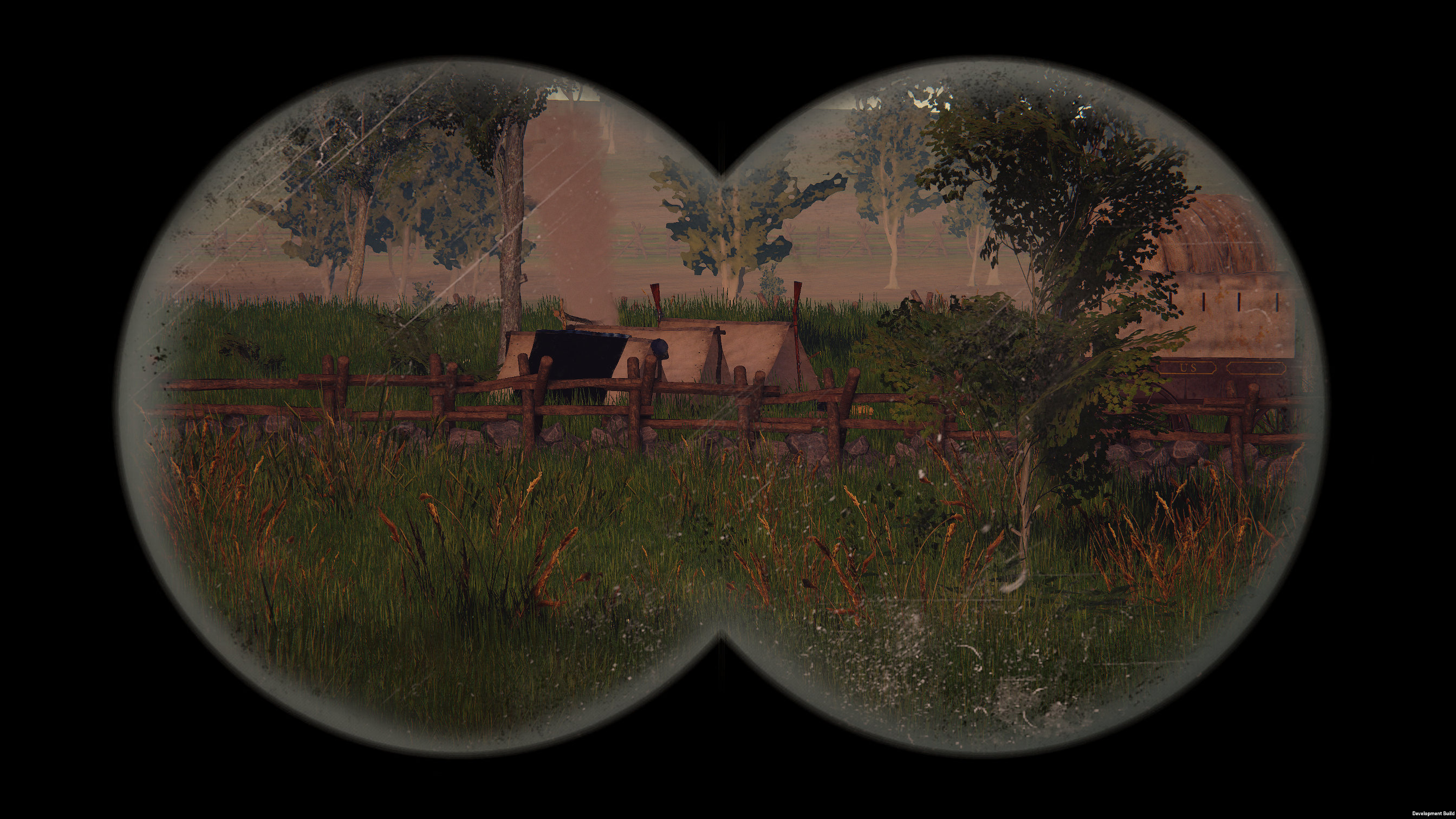 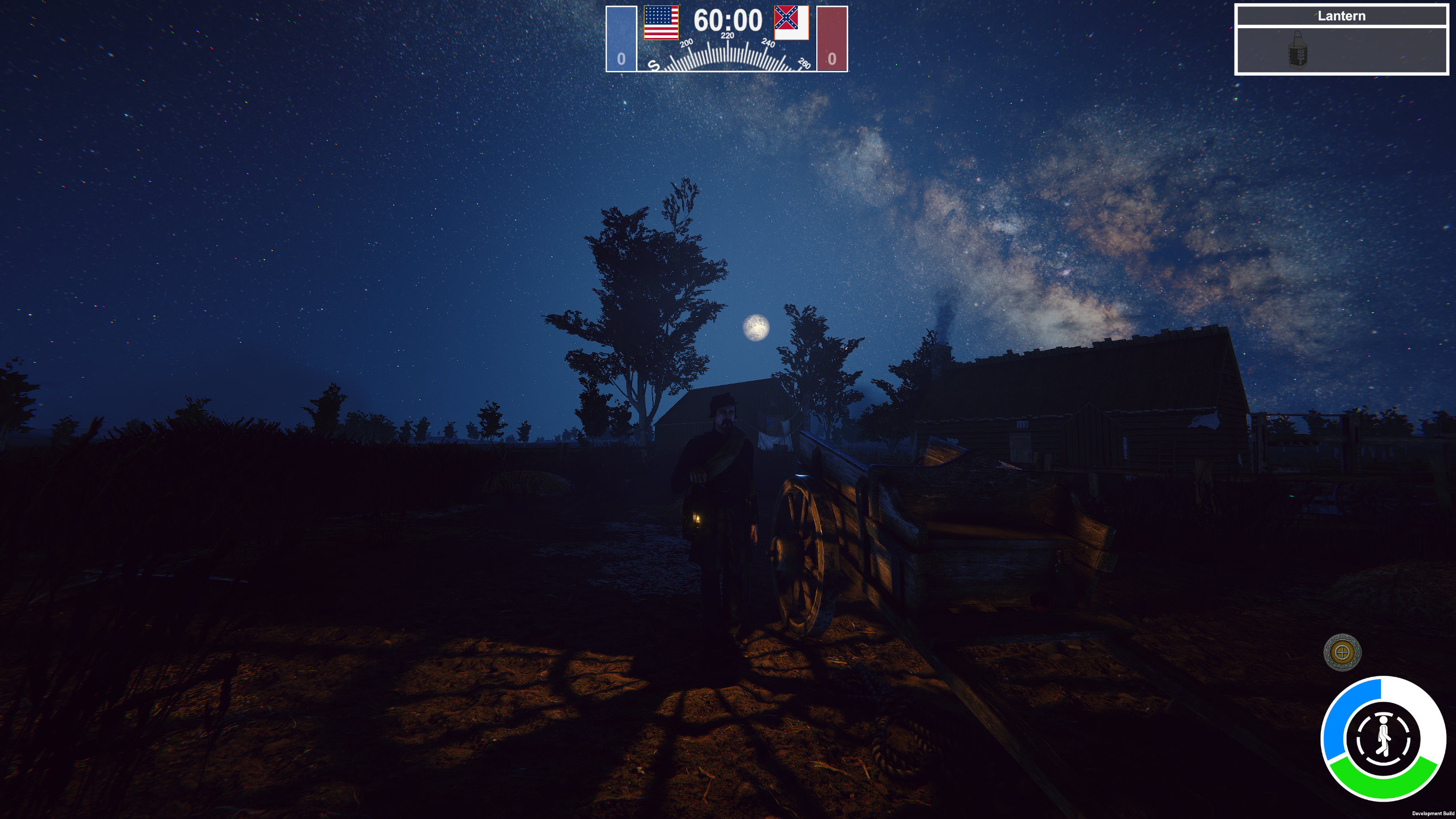 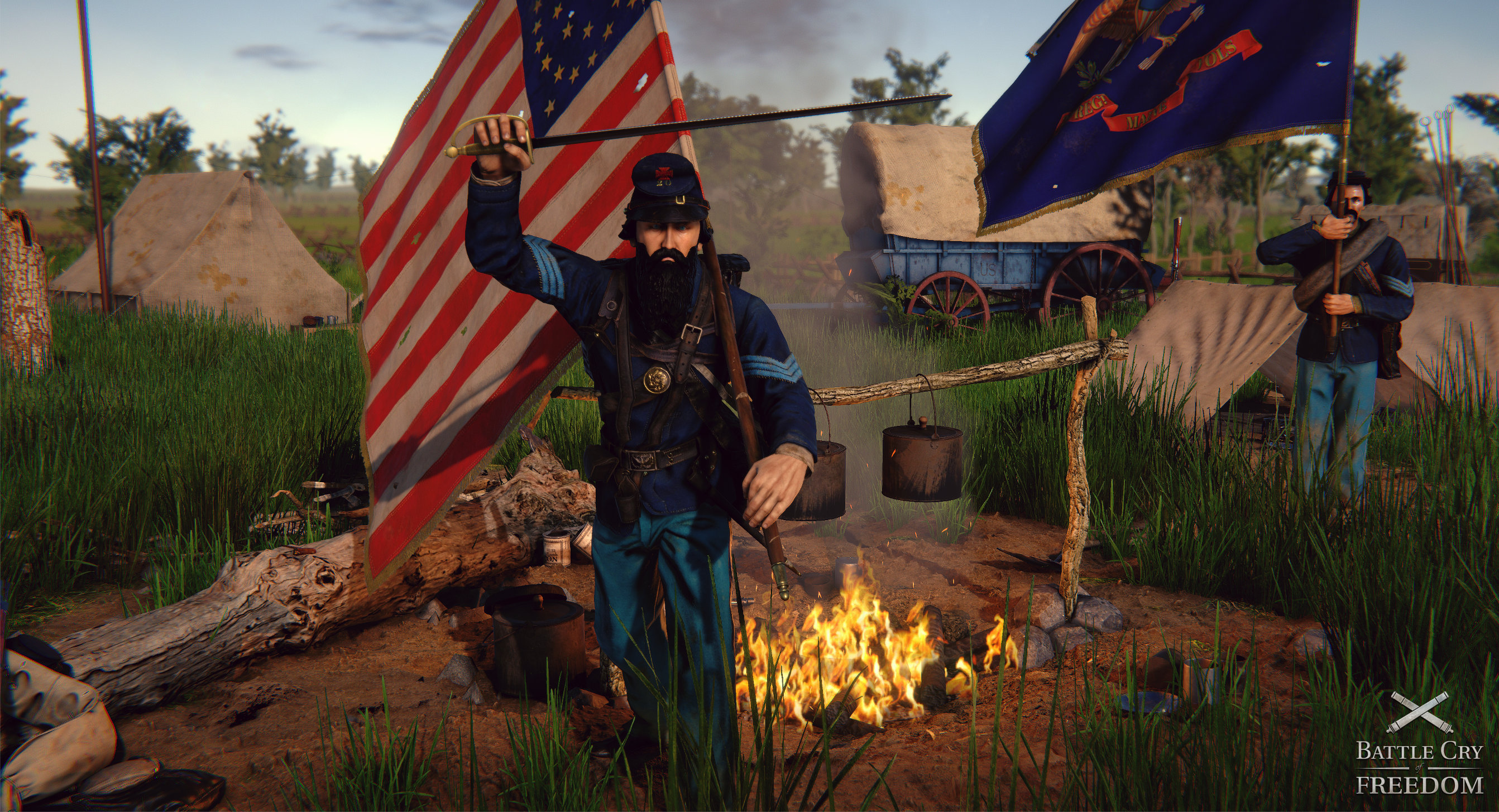 New Weapons
Unknown to many, the American Civil War saw the use of many different foreign produced military rifles. Tracking down these rifles is often confusing and difficult, as quartermaster reports simply refer to these rifles as French Rifle, Belgian Musket, German Rifle, or sometimes as Dresden Rifle. This makes it difficult to track down exactly which rifles were used, as many different surplus military rifles were imported to the United States during the war.

However, the most common of the French and Belgian muskets seems to have been the Fusil d’Infanterie Modèle 1842. It was produced in large quantities for both he French and Belgian Government and surplus weaponry was sold to the Confederate and the United States during the war. It looks very similar in design to the 1842 Springfield, but features an inverse lock design with special turn screws that would require the use of specialist equipment to take the rifle apart.

Those more known to the Napoleonic Wars might recognize the second rifle we have added to the game. The 1809/31 Potsdam Musket was produced in large quantities during and after the Napoleonic Wars to supply the Prussian Army with a modern musket. The 1809 Potsdam was originally produced as flintlock musket, but was later converted to percussion. Thousands of these converted muskets were sold to the United States Government prior and during the war. The musket features all brass barrel bands and an very interesting bayonet design that locks onto the musket using a spring hidden under the first barrel band.

Thank you all for reading this Blog.