Post news RSS Barton the Halfling and Leindal the Elf

Barton
This small, slippery halfling has become part of the Saviors group by the highest merits - merits according to the Half-Ssized cultural and military standards of course- Being such land the most peaceful of the Gléah Lands, the mentioned standards are things as peculiar as being able to swallow as many mapplepies per hour as possible, running with one single foot during four miles without halting to rest and also disappearing from the audience without using magic, even any halfling would love to learn some magic tricks.

No matter if this race abhors killinganimals to feed their bodies, they are not so forgiving when it’s about perpetrating such ominous deed against orks sneaking near the shores of their Islands -even they would not dare to eat such evil flesh!-. Barton has outperformed the vast majority of requirements to be considered amongst the citizens as the Ork Scourge.

Few is known about Barton's past. Only his father's death by an Ork axe explains his uncontrollable hatred towards the halflings natural enemies. 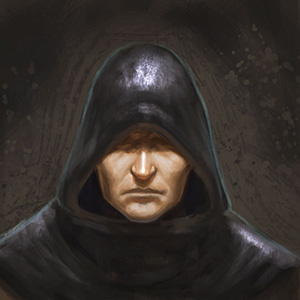 "Barton, from the Half-Sized Islands, also known as the Ork Scourge. You avenged your father long time ago, but your heart hasn't yet found peace..."

Leindal
The members of the Elven Council at Oniria have appointed this slender, sculptural elf to join the Saviors on his quest. This last minute decision of the Council to join forces with the Gilgegard Empire obeys to the bidding of a former loyal Alliance, when humans and elves fought side by side against the Agaroth Hordes. Leindal is captain of the Moonless Night Wizards, an army that alone retrieved the cities of Mayreia, Adlaeiht, and Galinh in only seven days without any support units.

A fact not known to many, when Leindal was yet a child under the Order of the Divine Cosmic Triad, he took the bow of not killing any life form...

Even his bravery and imperturbable attitude during the battle, some say that he never sleeps at night as penitence for having broken his early childhood oath. The Moonless Night banner actually symbolizes the inner state of those wizards whose destiny is to live under the recurrent grief for past deeds while at the same trying to assist others in need to bring peace to their lives. 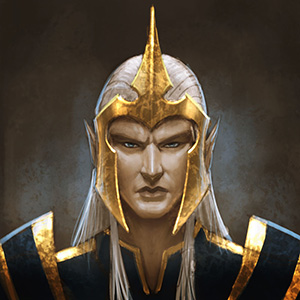 "And you are Leindal, Captain of the Moonless Night Wizards. Your brotherhood is not allowed to kill any living form. You know what you expose to on this mission, things can only get worse for you..."