Azusa v3.2 Is Near! Well, In the previous updates I was doing big gameplay changes, but this one is focused in adding contents to the game; I think the gameplay now is in the right direction and its time to progride a little more... Atleast for now;

(ps: Sorry for the poor screenshot, a new video is being worked on for this Update)

Azusa v3.2 Is Near!
Well, In the previous updates I was doing big gameplay changes, but this one is focused in adding contents to the game; I think the gameplay now is in the right direction and its time to progride a little more... Atleast for now;
So I will explain each topic here:

*Generations Nerfed!
Generations were too OP, it was easy win to train to lvl 15 and insta generation and do it all over again more time as possible and the result was: the point of generation being lost. To keep the game more balanced and generations something Fair I nerfed the RPP gains through generations and the Max Cosmo increase; Each generation you go, only half of your spent RPPs are returned to the next char, so for example your first char gained 300 rpps: your second starts with 150 and during his life he gained more 350 means your third generation will start with 250 and so on... (this is to make people actually play in that char if they want to have alot of rpps) And the Max cosmo gains was nerfed to +50 per generation, And the Generation req. Level changed too, its now 14+generation-count so, if you are in your third gen, to go on you need 14+3=17 level, and so on.. ps: If you die of oldage you don't need to reach your level req to go on generation!

*Skill Review!:
Everyone know that Azusa's skills were getting outdated and buggy and unbalanced, so I started to review all of them, also made a skill training system, so some skills are now trainable/masterable! gonna list the changes here:

*Blasts, Super Blasts, Strong Blasts and Ultra Blasts and Fire Blasts, etc: Now we have diffrent kind of blasts inside their category, for example normal holy blast pierces the enemies, ultra blast knock them away, blue blast is faster etc.. And each blast had their calculation remade(No more useless/instakill blasts) and added deflection!

*Denial of Truth, Panic Chock: nerfed and a minimum damage was added

*Learn Verb Review!
Finally reviewed this one! It was so annoying to not know what skills we could learn untill we got enough skill points... Well with the new learning system it will show a list of the learnable skills and the required skill points to learn them! 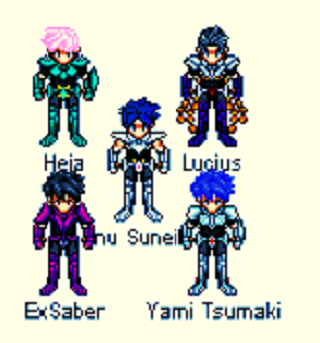 *New Armors!
My favourite topic in this update, yeah +4 new armors, now we have a count of 11 diffrent ordinary Guardian armors, 4 Elite armors, 2 Underworld Prince armors, 2 Reapers and the Death Lord armors (20 armors total) with their own skills each; "Wait you said +4 new armors but the screenshot has 5 armors!" Yeah yeah I know, only Eagle, Horse, Lizard and Flamingo are in -this- update, the other one (Swan) is on the furnace (aka being made). What is also on the furnace is the new type of armors the Kamuis (also known as last transformation) or God/Subgod armors the subgods being made are Athena and Posseidon! Each subgod will have their own line of armors (not guardian nor reaper) but this is a spoiler, lets talk about what is actually in...

*New Skills!
Aww yeah! Another of my favourite, alot of hardworking, The game has now over 68 Learnable Skills (Guardian/Cosmo/Angel/Demon/Kappa/Civil/Reaper/AnimalMaster) not including relics! as most of you should know the new 4 armors are a tribute to the anime that inspired Azusa, and their skills are also based on the show, so if you are a saint seiya fan and want to see your favourite skill in game, you will! Heres the news list:

*Horse Meteor Strike: reference to Pegasus Ryu Sei Ken, this one dashes you 4 tiles foward dealing damages, but also a barrage of force based attacks goes with your dash, the amount of attacks depend on your skill mastery!

*Triangular Chain: Reference to Andromeda Chains, this one creates the chain and lets you control it, the chain gives piercing damage based on force and the chain can trap evil hearted enemies(Reapers, dead people and vampires) and be really usefull as a support in wars, as shielding friends or trapping enemies.

*Dragon Rage: Reference to Rozan Sho Ryu Ha, a powerfull energy wave with the shape of a dragon that scales quickly with your skill level!

*Eagle Phantom Leap: Reference to Fenix Genma Ken, a Powerfull Leap dealing serious damage, spends alot of stamina and leaves a fire trail behind that can burn foes! This skill can be used to fly through montains and go through buildings, also is a great escape at combat!

*Blue Blast or Cosmo Blast: Basic cosmo blast, its the fastest blast and its speed can be trained!

*New Relics!
Alot of new relics, now we have 16 Diffrent Relics in game, and each one with its diffrent and unique skill, some relics will be rarer then others, some will come with ranks but most will be drops of Dungeons! Also the Relics system changed, now its not possible to wear more then 1 relic, but collecting them will grant you a variety of skills in combat! Wearing the right relic that fits the situation better instead of stacking many relics for power will be the true strategy!(Lets thanks Bailey for her epic suggestions) Here is the news list:

*Bloody Rose: A tribute to Saint Seiya's Aphrodite, this is a white rose that in contact with the foe will drain his blood! This relic gives +4 Potential!

*Dark/White Priest Robe: A dark/White Robe with a toggleable Hood, The main skill of this relic is giving you spiritual vision; with this you can see anything hidden and see the spiritual realm (angels and demons say hi!) And the sub skill is that this is the only Relic that can be combined with other relics, so you can wear the robe and a Suneik sword for example...+4 Potential

*Energy Trident: A blue and rare relic that can absorb energy! When absorbing a blast you gain +10 stamina and some cosmo! However its advised to use this relic carefully, if you absorb a blast and your stamina is full you will lose control of it and your cosmo will go back to 100! +4 Potential

*Poseidon Trident: Its the only known to be "Kamui Relic" wich means its part of a God's set; This means its the actual stronger (and rarer) Relic gives you +15 Potential and the ability to use Kappa Dive!

*Necklace of Immortality: This is the first cursed relic! Means once you pick this up you can't get rid of it. Everytime you activate this relic you have a 10% chance to be cursed into a Vampire, your skin will go pale, you will be considered dead and will get the known to be Angel/Demon Immortality: Your youth partially returns in 40-40 years and you won't ever die of oldage, becoming a vampire gives you +5 potential and the ability to call bat... However while you are wearing the Necklace you can Drain Blood and have a +4 Potential

*Royal Demon Rose: Also based on Saint Seiya's Aphrodite, this Rose have the ability to poison foes in contact and gives +4 Potential

*Turtle Shield: This is a shield that can deflect energy attacks! And give you +4 Potential

*Stealth Ring: This makes you invisible for almost every human and gives you +4 Potential

*Spiritual Crown(Or Angel/Demon Slayer): This is a rare relic that is used to kill angels and demons! While you are wearing this you are sent to the spiritual realm! You can be seen only by angels/demons and see them, allowing you to have a real fight against them! this skill gives +10 potential

*Fixed Training Bugs
There was a serie of fighting/training bugs that needed fixing and was being secretly abused alot, thanks for those that reported:

*Fixed defender spar (People could still gain if the other foe didn't fight, this way if you simply keep attacking someone stronger then you, both would gain)

*Fixed fight teleporter (This happens when someone attacks people too fast, and kills them, they could send the foe to the limbo and then combo to the limbo with the foe! Now teleporting in combat to diffrent maps won't happen!)

*Tutorial Review This is the first phase of tutorial review, the future updates will have a totally re-designed tutorial, but while we don't finish it I made so everyone could decide if they want to do the tutorial or not...

*Storage Review
Now we can finally store our treasures and Relics! Clothes, food, materials, money, etc can now be stored in a chest (theres a specific chest for this). I suggest you to keep your chest locked since now we have skills that allows people to sneak in houses! Lets the treasure hunting begin! Ps: Destroying a Chest/Library now drops its contents!

*Leveling Review
Now the leveling in Azusa became a real thing! The status gains per level up increases depending on your level and it was also averagelly increased! This is to promote people to do more active trainings since they give way more experience! Do Dungeons, Spar, Fight animals!

Well Thats it, long text right? if you TLDR heres the short version: