A recap of the showcase of my game at AVcon this year.

(A duplicate of a post at my main blog)Was great seeing you all at AVcon! The demo we showed was pretty early and rough, but I think it did a good job of communicating the atmosphere and art style. I’m planning on extending this demo for release later on, standalone from the final game, for free, which is what I’ll be working towards for the end of the year.

and check out this photo of my friend+assistant at the booth just before packing up after the first day: 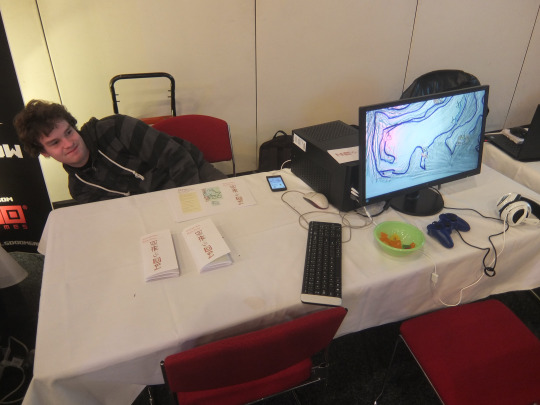 Our booth was complete with free lollies and amateurish brochures.

It was quite interesting to find out more about how people think playing a game. I should have run through the game with friends beforehand to find out what was and wasn’t effective; people were getting stuck at the same places all the time which was frustrating for them and for me. I had to stand out the front in order to provide a little bit of guidance for players who were stuck. Luckily I was able to rush in early the next morning and fix all the main problems before the next day, which made it much more successful.

There were a couple of interesting people who showed up. Early on there was a child who obsessively collected eggs at the spawn point for no apparent reason, for about five minutes. Later a person came up to me in a black pointed-cap robe that covered their whole body and face and had a big red ‘F’ emblazoned on the front. (If I recall correctly.) They really seemed to like the game and had a decent chat with me. Some people came and interviewed me for a YouTube or Twitch channel, but I don’t think it ever got posted. I was pretty excited to be interviewed unsolicited for the first time though!

I met loads of other game developers. Particularly friendly were the people running the website Backyard.sk, with their games Catnips, One Heart by 2 Hit studio, and World’s Fastest Super Pizza by Oscar Brittain, who were set up almost nextdoor to me. They were artsy and interesting but still fun and well suited to public competitive play, more so than mine. Team Cherry showed off Hollow Knight which I’m eagerly following, and unfortunately I didn’t get to play it because their booth was busy, and for good reason; it seems astonishingly fun. Chatting with the developers for a little was good fun. On the other side was Rungo Games with their mobile scorechaser ‘Devil’s Doom’ which is a mario-esque platformer adapted for a touch screen, and it was good fun. There were other games I’d love to mention but I think I’ll save it for a second blog post.

Of course there were a couple of negative responses. The most humorous of which was a young fedora-clad lad who sat down for about a minute while I was off eating lunch and left, saying “yeah... I don’t think it has potential.”

Let’s finish with that ;)