There's been a lot going on for us at AstroNaughty. Grimmstar has been gaining attention and the business side of things has kept us quite busy. We've been continuing to make progress with development though, so come take a look at where we're at. We have the very first pass of our fleet mining mechanic in the game now. This also includes a very early pass for inventory tracking. Along with that, we've made progress on some large assets and are continuing to work in other areas.

Hi, everyone! It’s been some time since we last updated our page here. Sorry for the lack of recent content, as things have been super busy around here. We had a few events lined up to show off Grimmstar, as well as additional side project goals to achieve throughout the month of May. June saw a small break for the staff (I was actually beginning to develop some health issues from lack of sleep and proper nutrients, but all is good now!), and we started resuming production around mid-June. Back to work on our dream project!

If you’d like, you can watch the video version of our devblog here:

During the month of May, we attended Seattle’s iFest, which is catered towards showing off local indie games either currently in development or recently released. It wound up being an excellent showing and we weren’t quite prepared for the audience that showed up. Our two stations were filled for the entirety of the event and a ton of people got to try out Grimmstar. We received a boat load of feedback, some of it being critique, and some of it being praise. They were all equally valuable in my eyes, as it was wonderful to hear which choices we made worked and which ones needed either improving or complete redos. I’m happy to report our reworked movement and aiming mechanics was highly praised!

Also, in May we were given the opportunity to have a booth at PC Connects in Seattle. This event was more focused for developers, investors, marketers, and other areas of the business. PC Connects was a wonderful event for us to network with link-minded people and learn more about the multiple business sides of game development. Overall, it was a super awesome time and I hope we get another chance to attend again next year.

As far as the actual progress on the game goes, we’ve been expanding on to new systems and mechanics to implement for our vertical slice demo. Right now, work is being done to implement the mining mechanic. Mining will be done by targeting a material rich asteroid and designating it for your fleet to come in and start mining. Such activity will cause a lot of noise through the various channels of space signals, so there is a chance your mining ships will be attacked. You can choose to either defend them until they’re done or simply carry off to another location. Word of caution though: if you don’t defend them, that chance of them being attacked could prove costly. 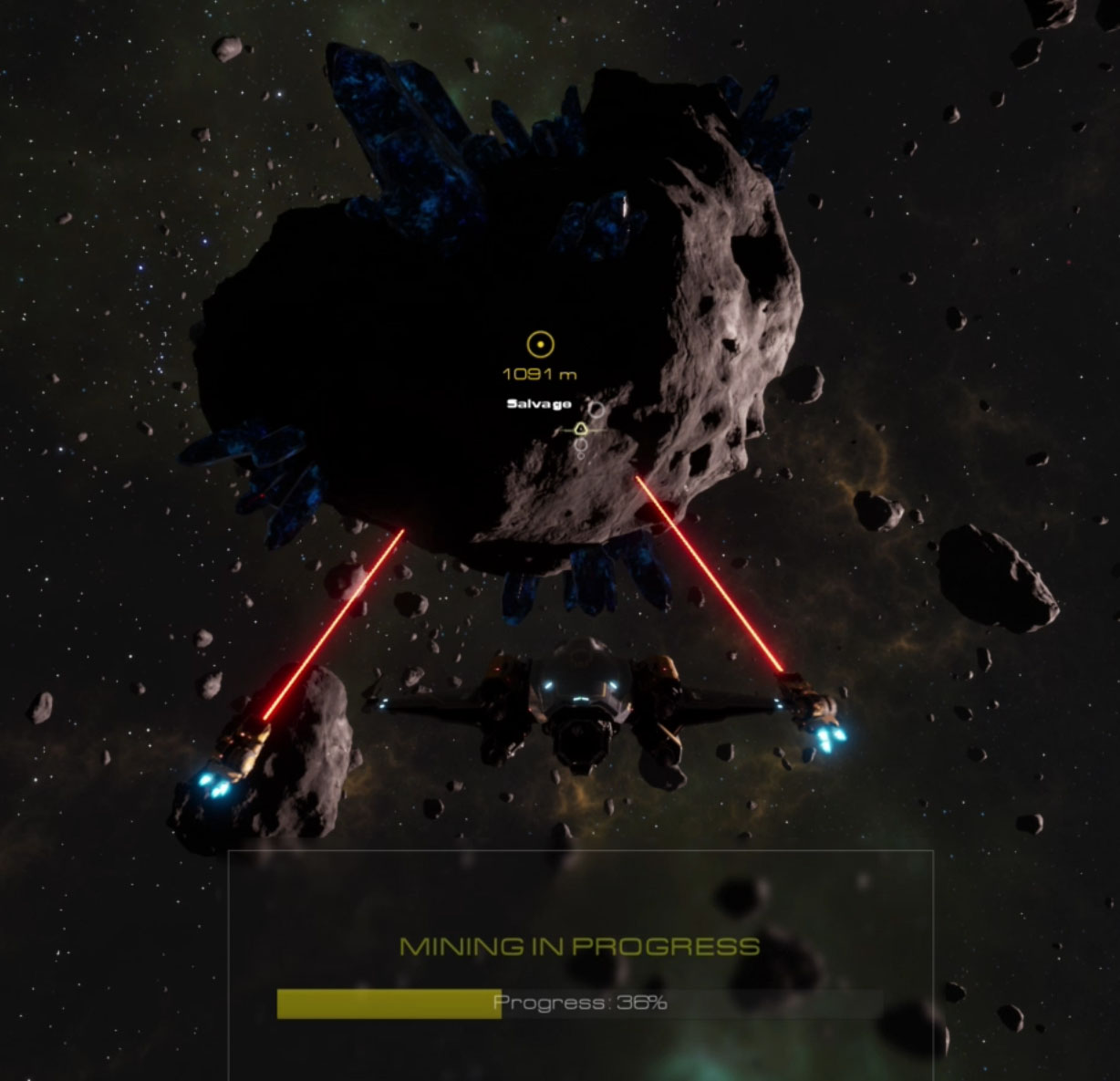 In order to get this implemented appropriately, we not only have to put in the system for calling the mining ships to the asteroid, but we have to begin development of our inventory system as well. Because these two go hand-in-hand, it’s going to take a bit of consistent progress to get these up and running.

Staying on topic with mining, we’ve been working to develop crystals that will be used to show the player which asteroids are mineable. Right now, we have about 8 meshes generated for shapes, but we’re looking to incorporate more, some of which will be more in line with crystal beddings rather than individual crystal shapes.

A master material was developed for these and it was my first usage of Unreal’s bump offset nodes to generate an effect that simulates depth within the crystal. All textures were created using Substance Designer. I first started out with getting the proper surface look that I wanted: having a nice, reflective sheen with streaks and patches of rougher areas, as well as some cracks underneath. These nodes were pretty easy to develop and pack together. 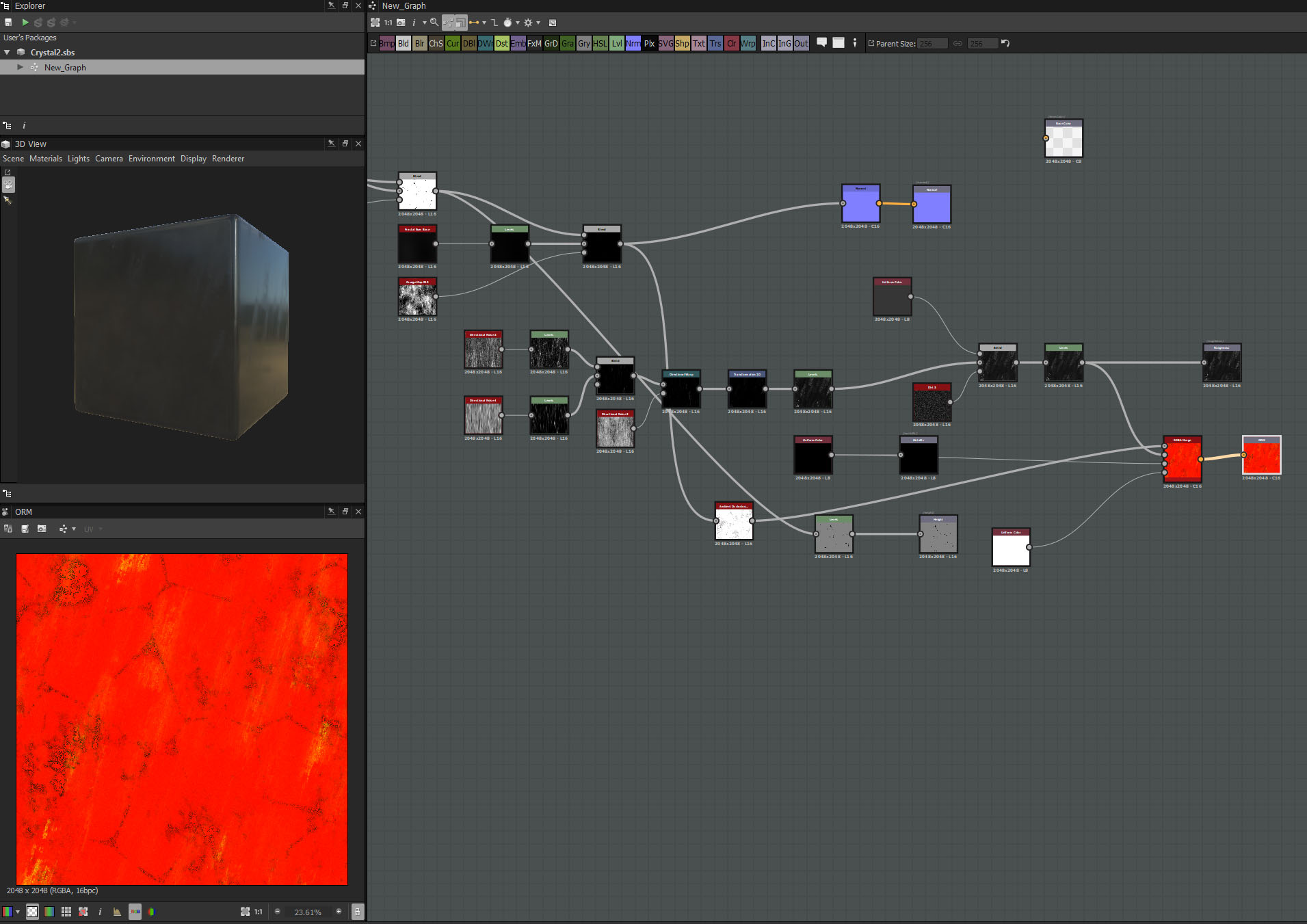 The harder part came when I was learning how to use the Bump Offset node to fake depth in the crystals. There is no transparency in these crystals at all. The Bump Offset allows me to give a perceivable transparent effect though. I took a lot from Ali Youssef’s breakdown here: 80.lv

On my first pass, I had something that looks kind of neat. Dialing in the numbers took some time, but eventually I was getting to understand how everything works together between the generated maps and the material logic. Then the (not so) fun part came – I had to generate maps to give an inside-a-crystal feel. 24 times. Each one being an iteration just a tad bit different from the other. I decided to go through two avenues.

I also wanted to give these crystals a unique look so that they could be immediately noticed when up close and still somewhat easy to notice from far away. With everything combined, I came up with two separate final nodes that I blended together and made multiple outputs with varying levels and blur adjustments. 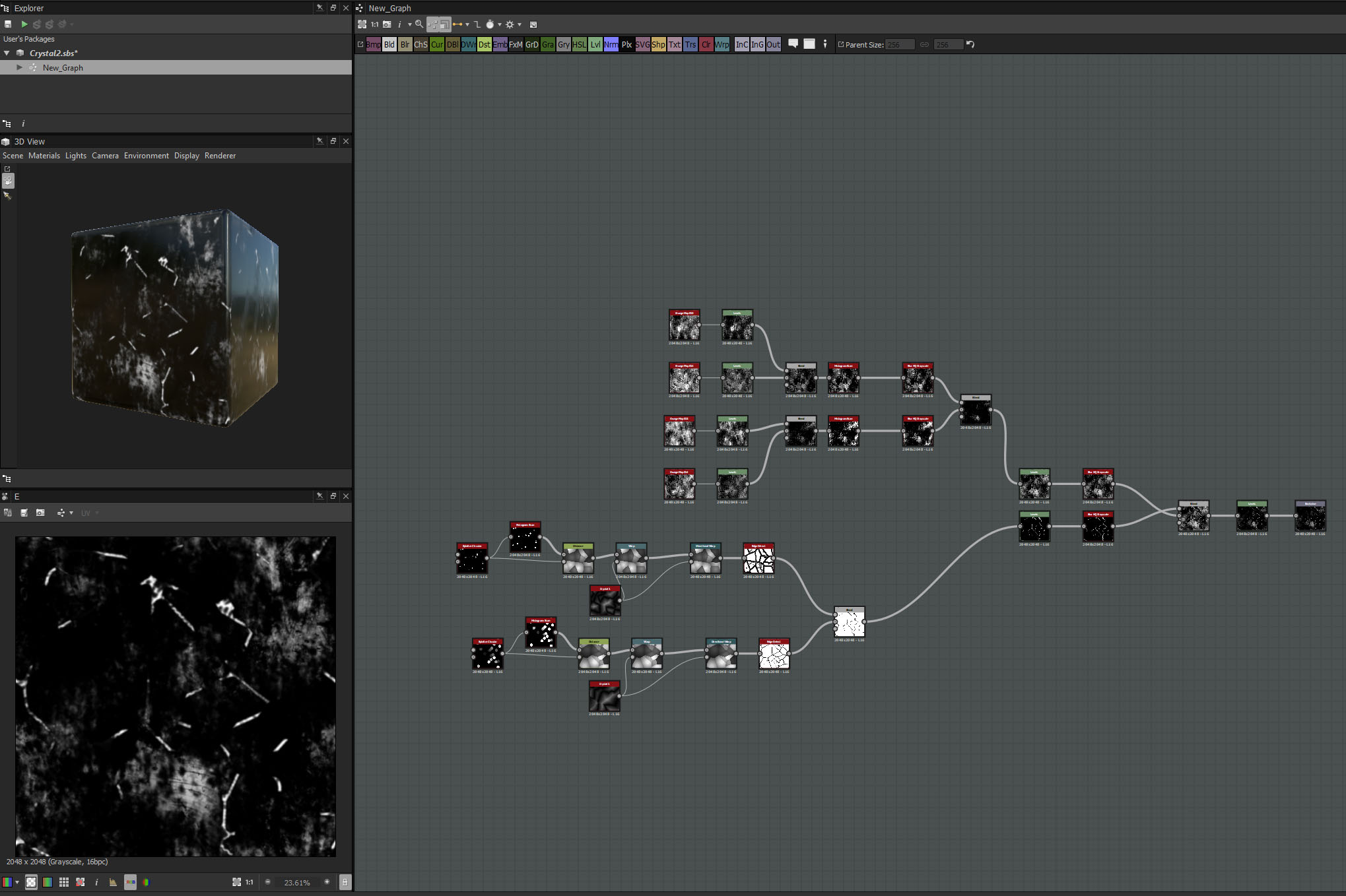 Altogether, it took me about 5 tries of the 24 outputs to get the levels where I wanted. At first, I made things far too dark. Later on, I applied too much blur too early, making the textures appear rather low resolution. Finally though, I got the balance I was looking for.

And here’s a look at the material graph inside Unreal: 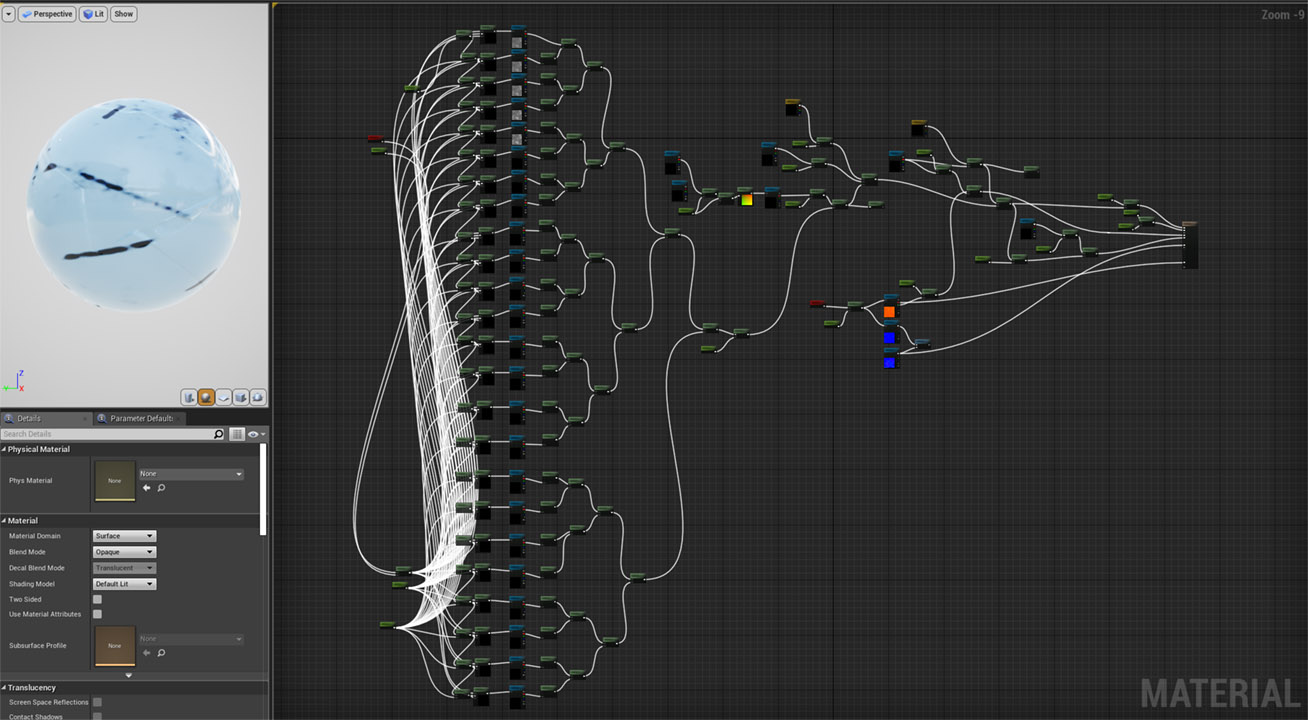 Because of the lighting situation in our game, I placed all of the color-based outputs to the emissive output of the material. This will help with being able to see the crystals when they’re in the shadow of something, ensuring you don’t just pass by without a chance to mark them for mining.

This procedural material approach has been helping us in all sorts of areas. Once created, they’re easy to plug and play and we’re able to get many variants out of a single material. Also, it allows us to show off size and scale in our game’s universe so you can see some truly breathtaking designs.

One of those designs is the civilian capital ship, the Terranova. It houses the vast majority of the population needed to repopulate and colonize, should mankind finally find a place to settle. Because of this, the Terranova will be a vital ship to mankind’s survival as you traverse the galaxy. If you lose the Terranova, you lose the game. This ain’t no flying house of glass though.

We’ve been working continuously on developing this ship and it’s starting to take shape. Big shout out to one of our wonderful artists, Anthony, for handling this task all by himself. It’s still very much in progress, but we’re starting to see the shape language in 3D space. This thing is massive. Player ship for scale.

One of the other areas we’ve been working on is the Outer Ring Mining Corporation’s headquarters. This HQ is placed near the rings of Fenrir and is the central hub for the processing, prepping, and shipment of goods and materials coming in and going out. The first iteration we had of this just wasn’t working with our art style and didn’t translate well to being a bulky, industrial machine. We changed styles for the building and things are looking much better. Progress will continue to be made on this and as team members finish up their current assignments, more of us will be sharing in developing and populating this home base. 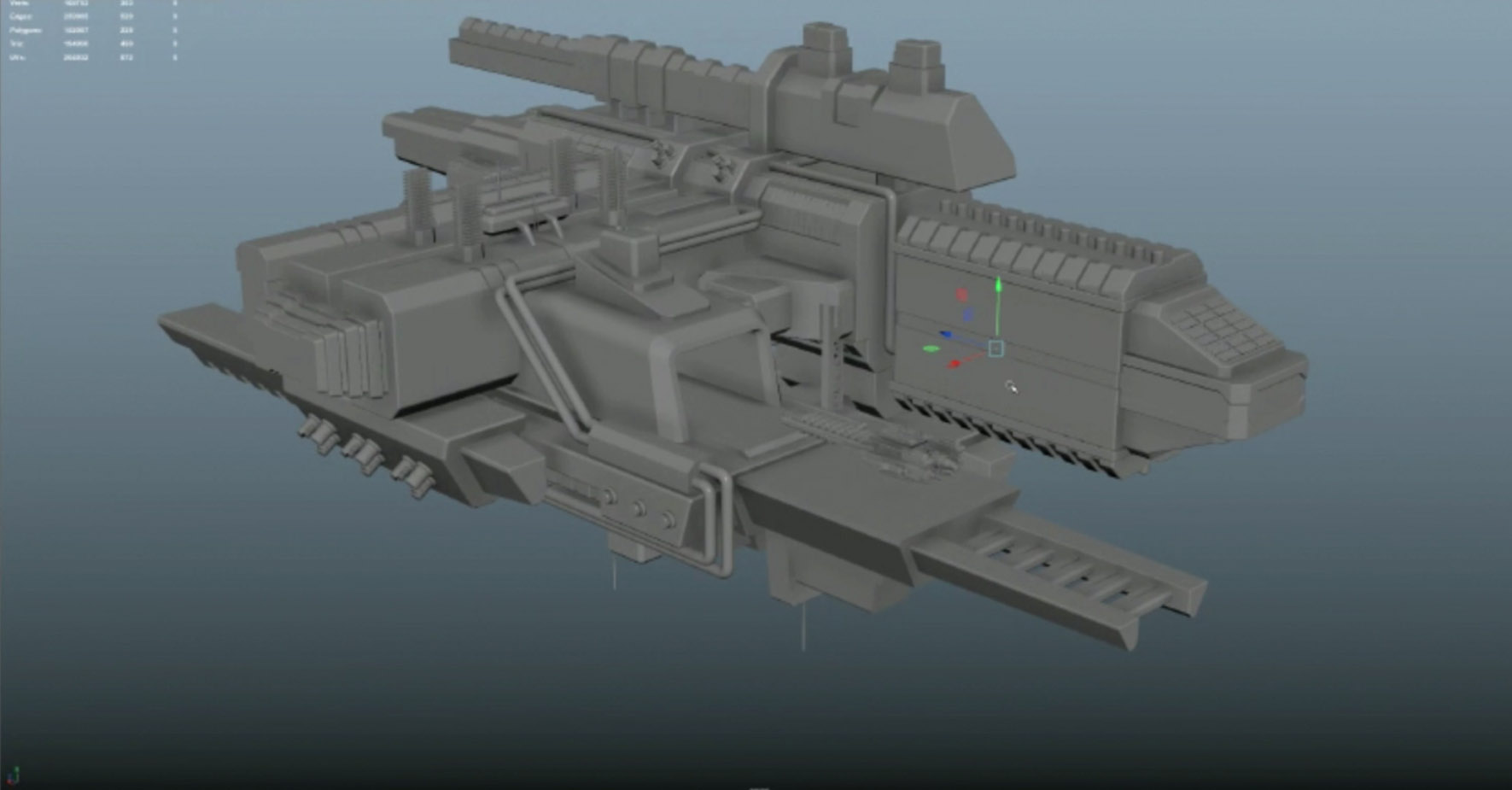 Lastly, we’re applying some final touches to the Enemy Swarmer model, which is now in game, allowing you to try and take them down while they work to swarm and annihilate you. We’re still working on improving their AI, so expect to see some further work on that in the near future.