The next update will be out within about a week. The game will actually have sound!

Posted by captain_deathbeard on Oct 3rd, 2013

The next update will be out within about a week. The game will actually have sound! You can follow the progress of our audio designer, Kole Hicks, on his blog: Kolemusician.com

After the next update the game is going to go up in price again, to $20. So if you are on the fence buy now before it goes up! And don't think you can wait for the Christmas sales, Kenshi won't be taking part in any sales...

I've also spent a bit of time recruiting, looking for the finest artists in the land. I'm still conducting interviews for a 3D environment artist, but we now have a new concept artist, Sergey Musin. He will work on designing the new world map and biomes, here's his first days work: 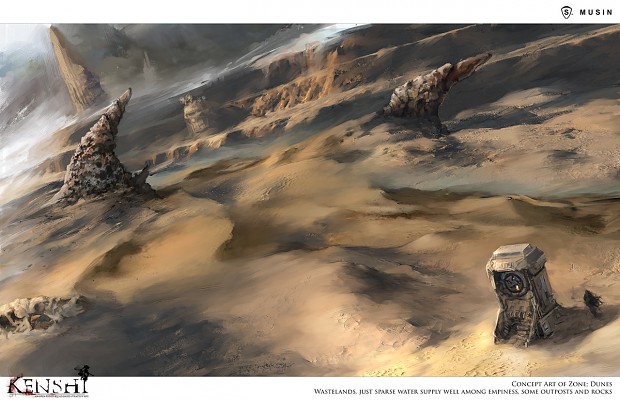 Sergey will design them, 3D dude will try to replicate them in-game (backed up by our 3D freelance team), and Sam will improve the lighting and graphics code to allow it. That's the plan anyway, all resulting in a huge interesting world map full of adventure and stuff.

Sam is now working on character code, to boost the frame-rate and enable female characters.

Kole is working on more sound effects, at the moment we just have footsteps and combat sounds.

I'm still deciding what feature to do next. Maybe bandit raids and kidnapping. Maybe ranged combat.

Ooooh, very nice. Music really was lacking from this so far, it'll help immensely to make this an actual game.

Wow, sounds awesome dude! After the Kole video teaser I haven't been able to play soundless Kenshi for more than a few minutes.
I hope you choose to work on NPC AI such as kidnapping etc rather than ranged combat, it will make the game seem more complete; but whatever you choose it will be great of course.

This couldn't possible be timed better for me. I am receiving a new gaming rig and can't wait to finally see this game in glorious 1600x900 with quad speakers and a subwoofer.

Also: Kidnapping or not, PLEASE implement raids ASAP. Without them, any semi-defensible base is only subject to random small groups of enemies.

Last post you said females were coming in the next update. This post doesn't mention it. Did it get pushed back or is that still on the table?

pushed back to the next update after this one (but soon)

All righty. Thanks for the info. Looking forward to finally having sounds. =D

You do know valve has released detailed reports showing the benefits of sales on revenue right? Go with the science! :P

There's plenty of time to do sales later on after the game is finished and has been out for a while at full price. Personally, I like the whole concept of the earlier you get in on the game, the cheaper it is with tiers going up a bit as major features and content are added.

This way seems much more fair to me than the current Kickstarter based trend to do exactly the opposite. Want Beta access? $20 more! Want Alpha access? Another $10 more on top of the $20 more for Beta! etc. You're paying more for less and paying extra to help the developers test their game essentially.

That said, if this game keeps pushing the price up beyond the $20 mark I'm not sure anything that isn't AAA will be able to get much sales above that price point, but maybe if this game turns out to be super amazing and gets a lot of buzz it could be an exception. We'll see I suppose.

I agree; it's very hard to justify paying $20 for an indie title versus a AAA developed game that's been out for a while. I brought this up with a different dev that was wanting $20 for a overhead RPG built with JAVA and he was livid.

Started an all-out fight with me, private messaging me and deleting my posts on his game's profile. I guess I hit a nerve telling him that indies have a harder time selling when they're at or above $20 because their "competition" skyrockets.

AAA games rarely go below $20 outside of a sale, but if you're a patient person it's almost guaranteed that ALL AAA games will be $20 EVENTUALLY.

Nice, i am liking what i see/hear may the Power of your Beard getting stronger and lead us all to a Glorious and Fantastic Game!

Great news. I'm really excited for the sound update as that should add lots of atmosphere to the game.