This dude has four hands! That's two more hands you can tear off compared to a regular type dude. He'll show up in sacrificial pit fights in hell levels and has his own personal dismemberment gate in level 17.

Enemies don't just stand around anymore, they do stuff! We've recorded more dialogues between enemies, and made more custom animations for enemies on levels. Now they push crates, pick stuff up and sit on stuff. Some of them are doing really shady stuff :O

New Voice OverCharacters that sounded, let's say, um, not very believable have been re-recorded. Demons have more grunt sounds, hurt sounds, screams, quips they yell at the player and so on. Non humanoid enemies now sound suitably wild and scary.

Final Boss Fight FinishedWe've been overhauling the final boss with every new update and didn't feel satisfied with the fight until now. There's thunder bolts and lightning, very, very frightening you. There's checkpoints between parts of the fight, there's more dialogue, the gameplay flow is more fun. The bugs have been exterminated. It's finally a suitable end to the slapstick gore-fest that is Tainted Fate.

Also you get these flamey hands: 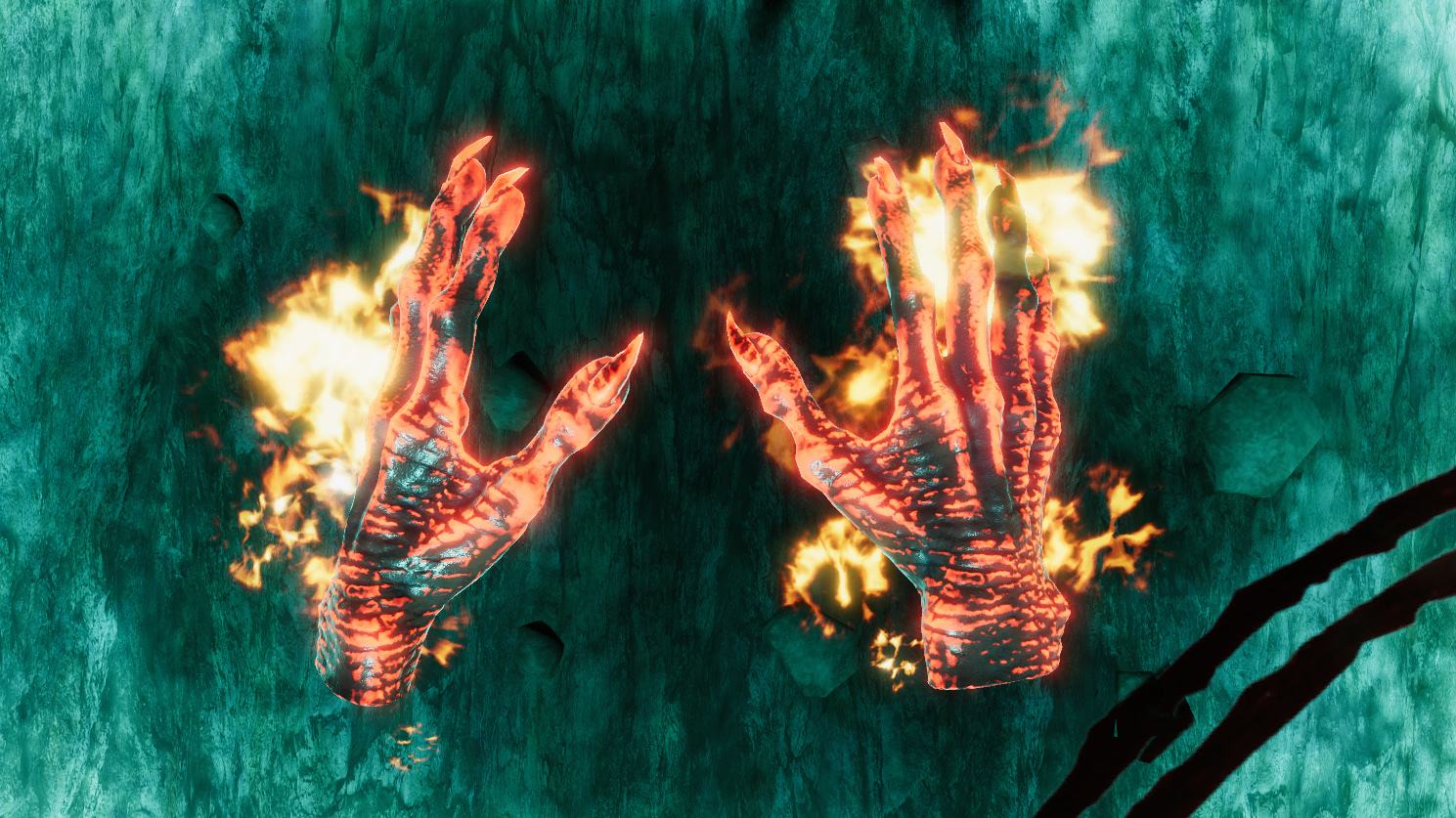 We're really happy to announce that we've implemented Steam achievements! Some are obtainable through just playing the campaign, others are harder to achieve and will test your exploration and demon tearing skills.

- spiky dismemberment gate torn off hand would act weirdly - fixed
- after you tear apart an enemy with a sharp object, they go directly to ragdoll instead of into animation and then ragdoll
- torso mesh deformation when cut with sharp object fixed
- 3d text shader changed in all levels so you can't see it through other objects anymore
- enemies that talk before the player approaches them don't continue talking during fighting anymore
- enemies now wait a second before attacking after they are alerted to player's presence, so player has a chance to instakill at least one enemy in group
- ambient music fades out when fight music starts, fades back in when fight music finishes
- minion shuts up if it's turned into iron (on pressure plate)
- added idle mode - some enemies now play custom animations before player interrupts them
- added new enemy - HandyBoi complete with anims, sounds, parts to tear off etc.
- when you touch exit level object on some levels, it automatically loads the next level (you don't have to teleport into all level exit objects anymore)
- in some levels you can now "open" the exit level door to advance to next level (previously you had to teleport into exit level doors)
- fixed bug where you could spawn an infinite number of explodable lanterns in prison island puzzle
- catacombs puzzle fixed
- enemies can't tear their limbs off on axes and shovels around the levels anymore (they would just walk onto a shovel and their legs would fall off)
- fixed critter bug in church boss fight
- fixed sound bug in shipwreck puzzle
- shipwreck and church intro dialogue does not play again after dying anymore
- doubled max pixel light count (no more "one eye has light, other doesn't" bugs)
- improved enemy AI, they don't try to go to starting position after losing player anymore (this resulted in them walking into walls etc)
- doggo now has proper demonic sounds
- new screams for tearing
- more quips for enemies to yell at you
- new sounds for objects (metal, glass shatters, gates opening,...)
- more ambient music in certain parts of levels
- ambient music fades out during fights when metal music is rocking
- death drums play when u dieded
-fixed critter voice over mistake
- new voice over for lesser cultists
- replaced voice over for cultists with new voice over
- fixed trails on lesser cultist and final boss glowy balls
- fixed surfaces where you couldn't teleport but should
- fixed surfaces where you couldn't free walk (certain stairs and inclines)
- thunder and lightning added in final boss fight
- completely remade final boss fight level environment
- changed final boss fight flow and difficulty
- added new player power for end of boss fight
- new checkpoints in middle of boss fights
- you can't fall off of edges of surfaces anymore in free walk mode - you just stop (less dizziness for players, less bugs for us) - this may not seem like a big one but it's a big one. Trust me.
- implemented Steam achievements

This update finishes up our update path for Tainted Fate. We will do one more big round of testing and bug fixing, but you can expect the full release very soon. We'd like to thank our fans who reported bugs and proposed features throughout the early access period. We would also like to thank everyone who gave positive and negative reviews, as long as they contained some constructive criticism we learned from them and fixed the stuff you didn't like.
Thank you for playing Tainted Fate. We <3 u and hope to get a lot more people playing on full release day!