The latest dev blog of the post-apocalyptic god game Atomic Society, discussing all the latest changes, features, and problems involved in making it.

September has been a slow and steady grind, the honeymoon period of indie-development is over, but I feel we’re adjusting to the long grind afterwards, when excitement meets self-discipline. We’ve managed to get some cool new stuff in, including 1 feature I’ve been waiting months for.

Those boring, old white UI placeholders have been updated. Mariana worked out a concept around burnt wood/paper and metal and practised her 2D craft, mostly using GIMP. We discussed whether or not to make the UI look like an actual part of the game world, making things look like clipboards, etc, but settled on a compromise between prettiness and readability. The best thing is that she now knows a lot more about the UI aspects and can do a lot more in that department when required. Here you can see the UI as it looks today. It's a lot easier on the eyes.

Nick spent his month pouring hard work into the need system, the core system that drives the city-building part of the game. Our NPCs will be complex individuals, but under every complex person are basic physical needs, and that's why you'll need to build structures. Our citizens now have 2 active, working needs at last, food and drink.

When their needs reach critical thresholds, they automatically go and find sustenance at a storehouse. It was fun (but a bit weird) seeing our AI characters move around of their free will after so long!

Making all this happen required a lot of head scratching but it was a fun task. We needed the citizens' needs to decay at differing rates, and to be boosted by different amounts depending on what they eat or drink. We also had to set trigger points for when they'd stop work and seek food, and give them the intelligence to know what was most important (e.g. don't eat if you're dying of dehydration!).

One unexpected but cool thing was seeing the villagers form a scrum and push and shove each other to get what they want. This wasn’t in the design, it’s a side-effect of the AI, but it suits the setting where people will be desperate for supplies.

As the citizens needs decline, you can now see that reflected on the information panel in the bottom left of the above screenshots (the 5 orange & white bars). That UI element now works.

It looks simple but seeing these bars trickle down at various speeds is something I’ve been waiting for ages. I knew it would be the core of the game. When you see the needs ticking down, it does convey the feeling of an anxious leader. You can sense how hard it will be to provide for them.

As they go down, the thermometer shaped icon goes down as well. That's your approval meter. It is calculated to be an average of all the needs in the town. And when that goes down your citizens will turn nasty and you'll be in danger of being ousted from power.

The fact our citizens now have appetites really drove home to me how much food, drink, etc, the player will need to produce. Even 25 people consume a huge amount of food and water every day. There is going to be a ton of balancing work ahead.

Our next goal is to put in ways for the remaining 3 needs (health, morale, and shelter) which shouldn’t be too difficult now we’ve figured out the basics. After that we can hopefully move onto the really fun stuff of giving the citizens personalities.

This month Mariana finished all the 3D models for buildings. A lot of them need minor adjustments still but it’s great to see all 26 of them in-game. I’m happy with the style she’s invented, making them realistic but still simple enough players can see instantly what a building is from above. The really impressive thing is how few textures the buildings use. Sometimes having zero budget can inspire a lot of creativity. 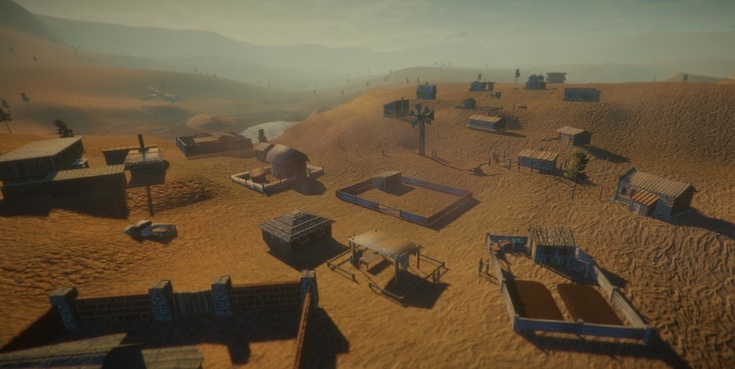 Back in February, we decided to give ourselves until mid-September to get the game onto Kickstarter. 7 months seemed like a lifetime then. But in reality, 7 months of hard work was nowhere near enough for a game this complex! We have completed hundreds of tasks, but the final dozen are bottomless wells. We still have the all-important behavioural traits that will make the citizens truly come alive before I’d feel comfortable seeking crowdfunding. I want people to see the mechanics at least in a basic, crude form. This was a bit disappointing, knowing we’ve got a long winter ahead, but I’m too proud of what we have done to care.

Decided To Keep the Team Small

Not much to miss this month, but if you haven’t seen it, there may be some extra screenshots of the game in the weekly “Screenshot Saturday” thread here. I try to update that every weekend.

Our music composer has been busy as well, aside from providing us with our first song with a bit of guitar in it (it reminds me of The Last of Us), he was also off DJing and being generally cool in the Netherlands this month. If you’re into hard techno, his set from that gig is worth a listen.

Personally, I feel it’s been a productive month but game development is strange. Nothing happens for a week, then five things happen in an evening and my mood goes back up! We don’t have an office, so sometimes it’s hard to know what people are working on. Old indie game developer clichés about wishing we’d used a simpler game idea as our first project sometimes occur to me, but I'm terrible at coming up with little games (I'd be a terrible phone game developer). Atomic Society is the game we want to make, and it’s a project that remains fun to make, so we’ll stick with it. We’re long past the point of no return.

And that’s it, for now. Thanks to everyone for your comments and interest in the game so far, really makes it all worthwhile. See you in October when hopefully there might be a few more vital ingredients and fingers-crossed I can do another short Youtube video of me actually playing the game if we get the vital ingredients in.

Keep up the awesome work guys! The game is looking great