August is turning out to be one of those months when you do a hundred tiny things, and it doesn't seem to add up to much. Only when you stand back and look at the whole picture, do you realise you've done so much work. We've got a lot to share this time.

After the monumental progress of July, it was time to fix underlying issues with the game and to build the foundations for future development. I dread these moments. I always want to go forward. But better to fix the present than worry about the future. Nick said sooner or later we'd have to patch up the engines. The question was whether to do it now - when it’s a relatively small job - or later when it could take ages because there'd be so much more to redo. We decided to do it now.

Over the last 3 weeks Nick has essentially rebuilt the innards of the game single-handily and gave it a total tune-up so that it’s a lot more future proof (as much as anything can be in games!) I did fear at one stage he’d disappeared into the coding vortex and would end up like Gene Hackman at the end of the Conversation movie but my fears were heedless, and now we essentially have Atomic Society 2.0 under the hood.

The amount of work he did is insane and such is the life of a poor tortured programmer, it's largely invisible to those who aren't programmers. Nevermind. You’ll see the fruits of it later on as we can pump out content faster now.

This month we experimented with a new way of doing the build menu today. Most city-building games do it in a different way, but it is the most crucial menu, where the player is constantly going. I originally came up with a streamlined pop-out system, which was fine, but Nick came up with the idea of making it tile based and I have to admit, it’s a lot better in action. Always trust a programmer to make something efficient. 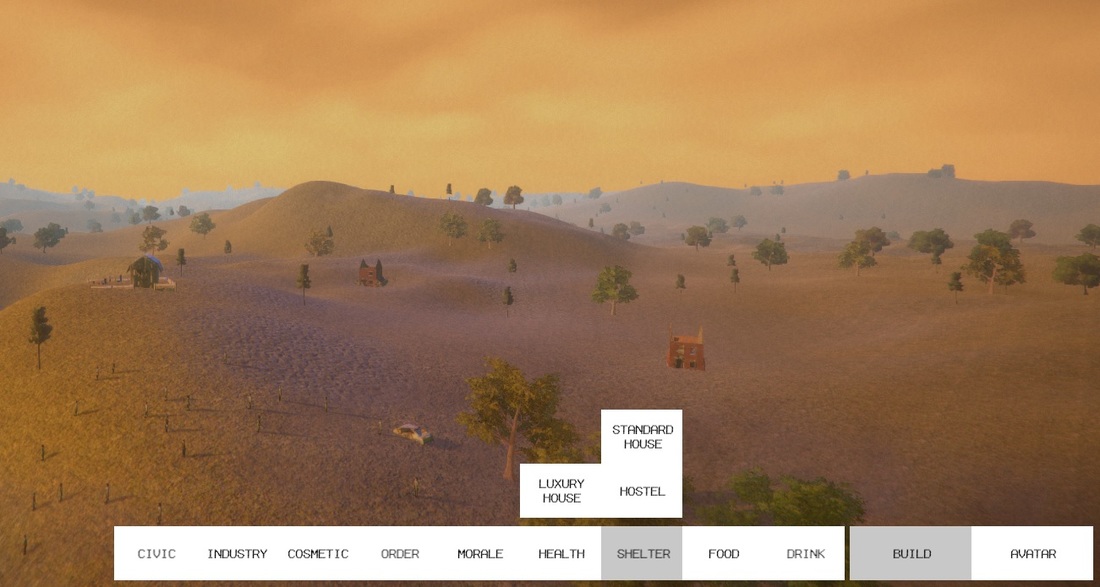 We were also able to add in the first part of the star rating system. Every time you hire someone to work in a building, they will slowly gain work experience that makes them more efficient and reliable at their job. You’ll miss it when one of your top workers dies/leaves/goes nuts. At the moment they gain one star per year, in a gradual way. This month we were able to put in the first elements of this system as you can see in the pic below. You can also see a little of the citizen's biographical data there. 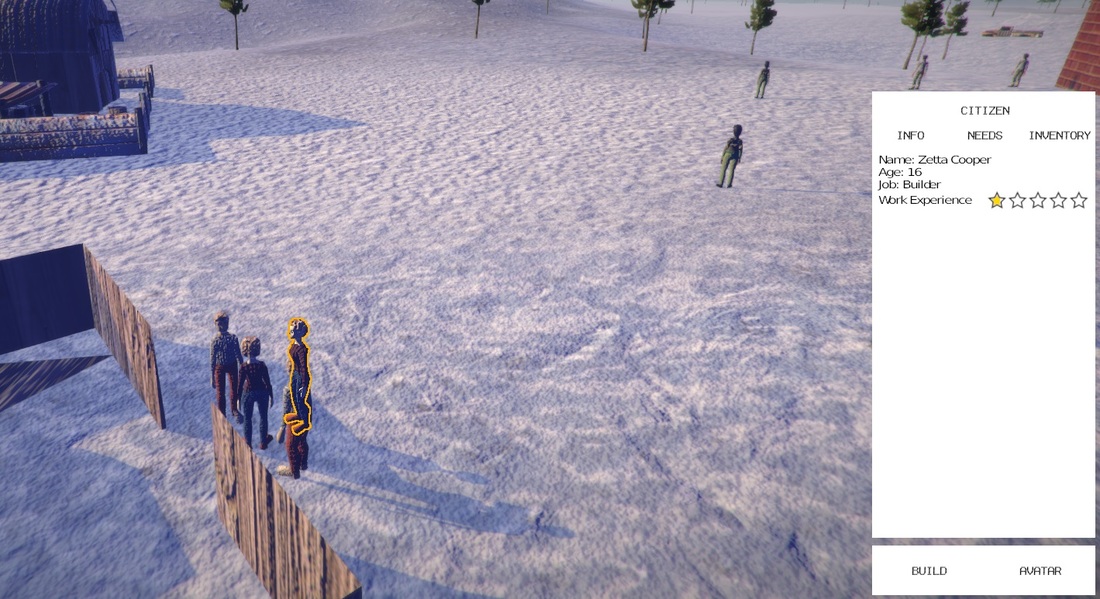 We had been using a system called “root motion” on our characters, which makes the animation look realistic. But having realistic animation with hundreds of citizens in a landscape that changes radically as you put down new buildings was causing a few bugs, to put it mildly. After days of trying to solve it and getting stressed, we simply hit the destroy button and removed root motion from the game. I was worried this would ruin the look of the game, but it’s barely noticeable even if you're staring at the citizens. We're going through all the lessons other companies who have made city-building games learnt years ago I guess.

I did some work on a new level for the game this month. This one is set entirely in a canyon where the survivors shelter from the radioactive winds above. This level is unique in that you can't go above the canyon and float around. You'll never know what’s around the next corner (though this top down aerial dev screenshot gives you a bit of a clue!). 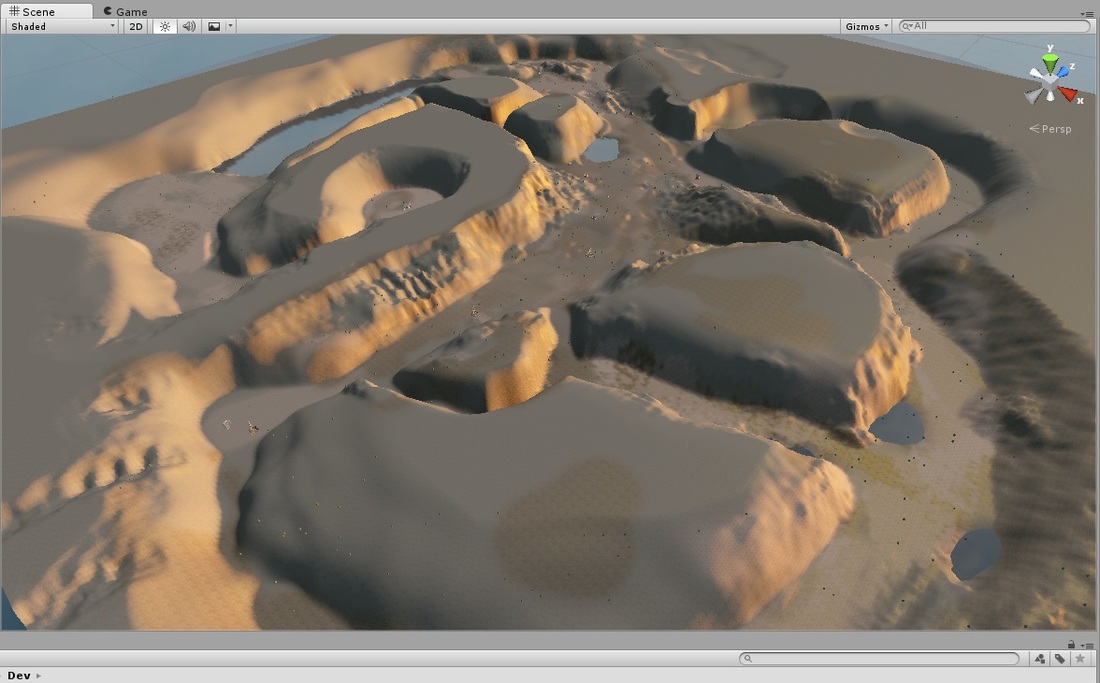 Thanks to Mariana we have created plenty of new buildings this month, almost too many for me to remember!

The screenshot below (which is taken from ground level on the aforementioned canyon map) shows about half the buildings we already have in the game. Naturally, this only shows one copy of each building, so it's the start of a town, and that would probably be enough buildings to accommodate 50 citizens. So you'll soon have a town that stretches into the distance.

It’s not so evident in that pic, but those buildings have also had their textures upgraded. Certain indie-devs say is that you shouldn't get too bogged down in art, but those people probably don’t have the luxury of an artist. We don’t go overboard, but adding a degree of art to the game even this early on has been really beneficial in terms of getting a feel for the game and seeing where you’re supposed to be going. It inspires you. A game is about how it makes you feel, and art is a massive part of that even at this stage.

Which is a rather lame name for what is going to be a backbone of the game. As soon as you load your city, you'll to see something like this in the bottom left: 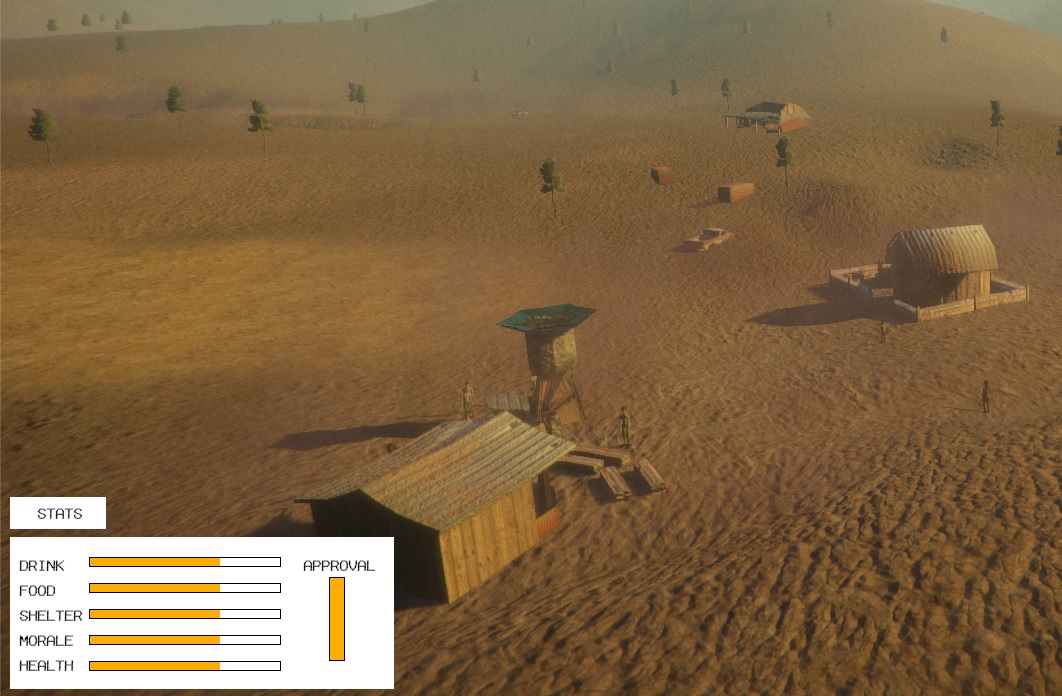 Those orange bars are averaged among your entire population and will tick down as people get hungry, thirsty, tired, etc. The Approval bar you can see will also tick down. It is an average of the other bars. And when that ticks down, your citizens get nasty.

If you've got a murderer in your midst, he or she is going to get bloodthirsty as confidence in your leadership expires. The punishment for playing badly is not bankruptcy (there is no money in our game) but social chaos as everybody's worst aspect comes to the fore.

We went with a need bar system because it sets clear goals for the player. You can see immediately what you need to aim towards, no guesswork. How you actually fill those bars is a different matter, but it should point new players in the right direction. I’m hoping when I do the next blog, these bars will be properly linked to the citizens and we'll have the first taste of true gameplay.

As Nick was re-doing the code, I set about doing the same thing with the design docs. I had designed most of the game in advance but we’d now come far enough in now I didn't have to guess so much. I first set about simplifying things. I am a believer in the theory that you should take a game idea and simplify it as much as possible. Even complex ideas, such as a citizen having needs, wants, fears and desires, can all be broken down into simple steps if you try. This doesn't mean that the game becomes basic, simply that the components that make it become as streamlined and elegant as possible, making the player's choices clear and fluid.

Finally, after weeks of trying to get my slow PC to behave, I was able to record a little bit of test footage of the game. At the time of writing it’s coming up on 700 views, which I don’t think is too shabby for a game almost no one knows about! Go and take a look and let me know what you think. Naturally it just shows the game far from release, but it’s something. We’ll try to have more test footage in the near future.

The last couple of weeks have been interesting as we have had people apply to work with us (work is a liberal term as no one's being paid!). I’ve been in two minds about bringing someone else on the team. On the one hand, we’re a stable team of 3, but at the same time, it would be lovely to have faster progress and to let Nick rest a bit if he wants a day off. I think Far Road Games will always make code-heavy games, rather than art-focused ones so we need lots of programmers. We’re speaking to some people this week and we’ll see what happens.

A website named Gaming Conviction somehow found out about our game and wanted to interview me about it. This was a rather surreal experience. I’ve been reading about other games for as long as I could read, and now someone wanted to chat to me about mine. I didn't have a clue what to say at first, but soon found my tongue, as you’ll see. I know it's not going to set the world on fire but it was a lot of fun.

I can’t believe how much time marketing takes up if you’re a person who finds the act of selling to people uncomfortable. I find it completely exhausting and I’m doing relatively little of it. I’m slowly working out a way to handle it though. The biggest lesson I’ve learnt is don't over plan, trying to guess how people will shop leads to madness, and only market in ways you enjoy. I like writing these dev blogs. If I wanted to work in sales, I'd get a different job.

Atomic Society is going to need a Kickstarter unless we find several thousand pounds lying around in a dodgy briefcase. Right now we're surviving by the thinnest thread and it would only take one of the team’s PCs to break to stall the project. We can't exhibit the game at a show or anything because the fees are too high. The real question is when to go begging. I’m a bit scared if we don't do it soon, we'll be lost in the winter avalanche of games that come out, but we must have some solid gameplay to display. I suppose I’ll trust myself to the gameplay and hope that is enough to make people open their wallets even near Christmas.

* I started a personal blog on the process of making an indie game company. Check it out here. It currently has 2 posts on dealing with the stress of making your own business and the fact that you can design games even if you don’t know how to program.

* Mariana made a Major Lazer inspired thumbnail for our game, which is rather cool in an 80s way.

* Tweets! Lots of lovely tweets. Each of them a sheer delight for the soul. Read ‘em here.

* We had a discussion on how dark and mature a post-apocalyptic game can go over here.

So that's not a bad little update for 3 weeks I suppose? See you again next time and please do let me know how your thoughts and feedback.

This is looking so promising. Rooting for your success!

As a mediocre Programmer myself (I once Implemented a camera switch system in a unity, 3 lines of code I think maybe more..... I was thrilled lol). But I totally get what you're saying no one knows how much a programmer does.

But loving everything so far, still can't get over that white background though lol sorry :(

Haha you sound like our programmer (he's not a fan of the white background either) :-). We just haven't created textures for the UI yet. That's one of the last things to go in. As long as it doesn't scare you off entirely! And, yeah, making a camera that can do about 300 things is proving to be a fun challenge so far...

Keep up the awesome work guys!