Posted by tethysinteractive on Sep 11th, 2015

Haha, ok so it has been a minute since we pushed out an update. After the last update before this current one, we had many things happen in the project and life that set us back. Our funding went to two new programmers whose task was to develop the multiplayer functionality for our voxel terrain. 3 months later neither one was able to provide any working code and both left the company, leaving us with a lot less budget heh.

Amy and I (we are the lead developers/owners of the project) also had a bit of family tragedy, as well as adopted a 7 month old boy during the process.

So over the last year the 2 of us and a couple other contractors helped on a part time basis to rewrite our main framework (twice), add multiplayer, update to Unity 5 (which required updating most of our art assets and code) and many other things.

Currently the team is only 4 - 2 full-time people (1 developer and 1 project manager) and 2 part timers (one programmer, one writer/artist). We are looking to add 1 programmer to the team in October. 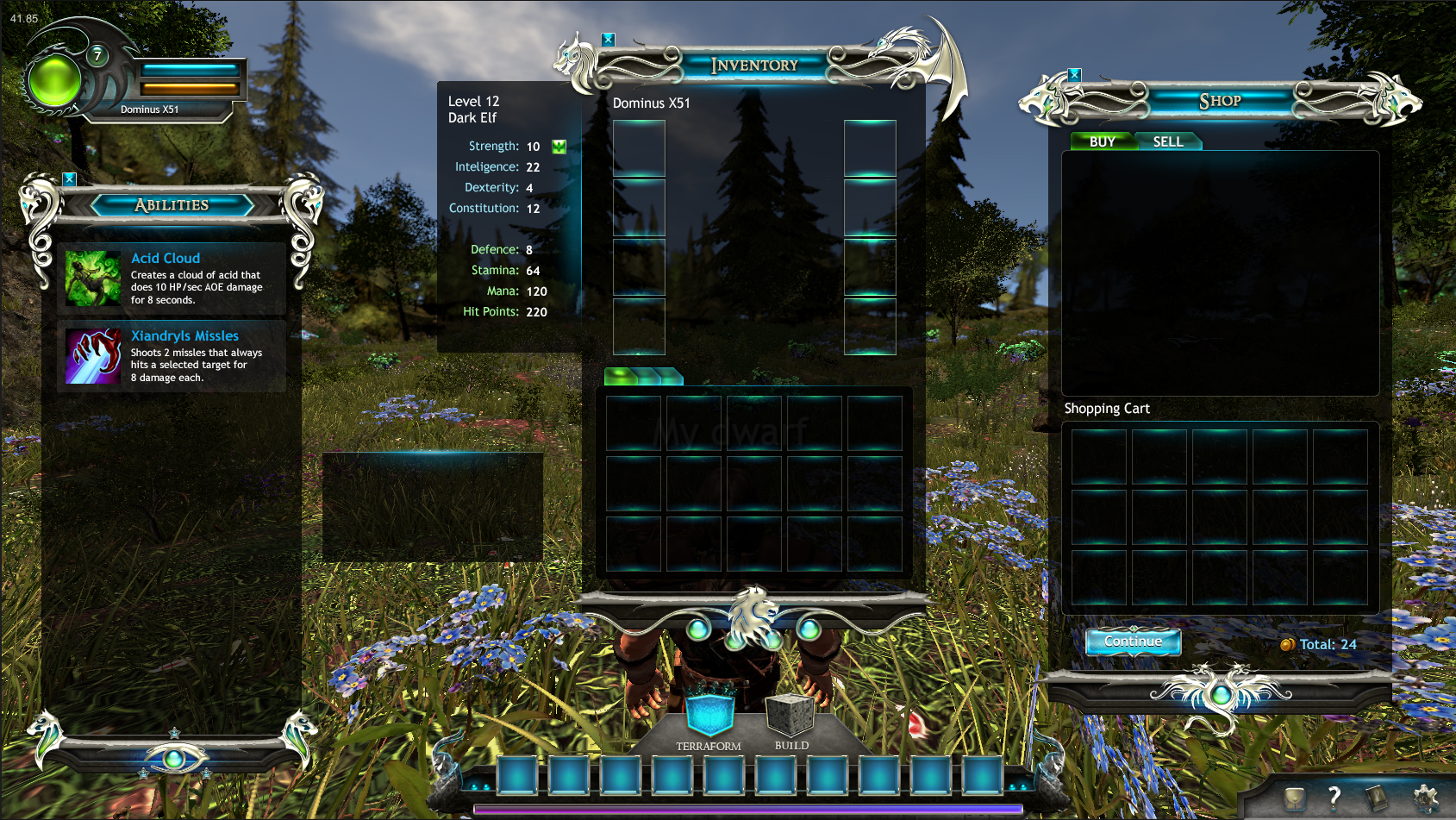 A couple Play Tips
- Hit R to remove an item you placed in the world while standing very close to it. To remove a house stand in the middle of the house.
- Rotate items by holding down CNTRL before placing them on terrain or building.
- Hit F1 to quickly turn Terraformer on and off. Players no longer have separate terraformer tools and you can do the ice man slide trick while running with the main tool now, simply switch to Add mode and put the cursor right in front of the Avatar and hold button while running forward.
- Hit R to rotate pieces in Build mode.

Character and World Wipe
There are some things that have changed now. It is HIGHLY recommended that you go into your game folder once you have updated and delete the contents of your "Worlds" folder. The old worlds are going to conflict with the new Voxel Terrain settings and other things as well. We have also moved over to an online account mode which saves your characters and inventory. This makes it so you can play the game from anywhere and still have your characters. However, you will need to be online to play. We have worked on a single player mode as well and will eventually fine tune it so that when you do not have a connection the game will load into the single player mode.

World Items
There are a bunch of new items to craft/buy that players can use for decoration in their worlds. We have only placed a few at the starter shop, most you will have to craft. Once we get through this latest round of testing with you, the private crowd, we will remove most of the shop items in preparation for going live on Steam Early Access (more on that later). This is only the start of the world items list, I still have about 5 or 6 waiting to be wired up, as well as an ongoing list of items that would be great to have (looking for some feedback on this).

Patch Notes
I have added some items to the version notes included with the game. This is not a complete list but here are some of the new items:

What's Missing
- We pulled mobs for the time being. While combat is super important, I am still working on the new Attribute system. We also felt that the AI from the previous build had many problems so we tossed that out with the old framework and are working on new AI. Mobs will most certainly be back ASAP as besides providing a level of excitement and danger, they also drop items needed for crafting.

- Character Controller is incomplete. This is a new scheme and it is missing some things that we are still working on. Most important is an auto-follow mode where the camera simply turns with the character turning. This is on priority and will be in the update next week hopefully. There is also an issue where when you run backwards, then hit Jump the character will jump forward instead of backwards. Lastly, Avatar stickiness needs to be added for when player is standing on slopes. It is in the current controller but not working correctly so this will change.

- We have more structures and houses on the way. I wanted to include at least one with this update but we were having some issues and ran out of time. Look for more houses and other architectural structures in future updates.

- More Spells are on the way, as well as more weapons and wands. Since we knew combat would not make it into this update we only included a few basic spells for each character to start with. I have made spell tomes that when the play finds they can use once and learn a new spell from that item. This functionality works now and you will see the spell tomes in the shop with next weeks update (not all spells are combat based).

There are a couple pesky bugs we couldn't get through before the update today.

When picking up an item you have placed on the terrain, it will remove properly. However, when you reload the world the item will be back again. This is being worked on and the fix should show up with the next patch.

Farms are supposed to grow after being placed. For a quick workaround I set it so players could harvest them right away. In the future, after placement the farm will grow and the player will have to wait. Once the farm runs out of resources it will regenerate more over time, rather than acting like Trees do and popping off the terrain. The current behaviour is not what is intended and is only a temp fix, as players needed a way to obtain food since we introduced the Stamina Attribute. In the future, players will need to have a certain amount of Stamina in order to dig and do other activities - for now it simply drains health once Stamina is too low.

The Terraform Terrain UI is not properly setting itself to the last settings used with the tools. If you change a material to Gold in the UI, then turn the tools off then on, the tools reset but the UI does not. You will need to switch to another material, then back to Gold to load in gold again. This is unintended behaviour and will be fixed.

If you are AFK for more than a few minutes the Cloud based room that hosts your game will drop you. If you were the only person in that room when a new player connects, and you are disconnected before they are loaded in, they will get in wrong version of the world. We will fix this in a future patch.

Well that's it for now. We just pushed out a new patch on Friday, head on over to the Astral Terra Community to read the patch notes.