Releasing the finished 3D model for the most important NPC in the game, plus development information and stunning new art in this article!

Releasing the finished 3D model for the most important NPC in the game, plus development information and stunning new art in this article!

There are currently positions open for the following jobs:


In the last article we presented you a bunch of the concept art that was developed by our concept artists so far. But, as you guys always said, you cannot develop a game with concept art only and that's why we want to present you the finished mentor model in this article.

The Mentor ... where have you been?

You guys already had a look at the concept art that was developed for the mentor, which is a key figure in the complete game, not only in the first episode (Shattered Dreams). After that, we have presented you the voice for this mysterious guy and finally, we can also present you the 3D model for it. 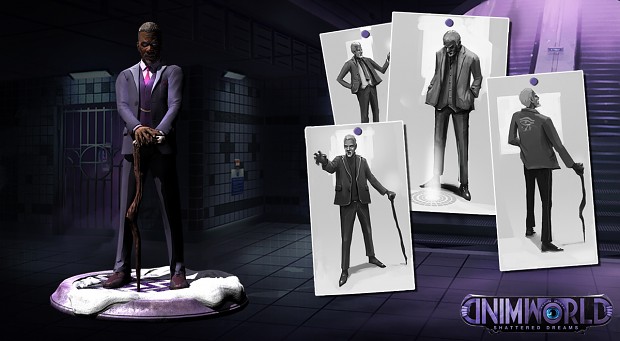 
You are going to have contact with the mentor very often in the game, but we want to keep information output low here, because we don't want to spoil you guys. The effect we wanted to achieve was perfectly explained by one of you guys:

"He looks evil, but we can't judge a book by hes cape. Maybe he is good, I don't know. He's much more like a Riddler then a Mentor. He talks in riddles, he teaches... "life". I can't wait to play the mod (or the demo, which comes first) because I want to find out if this... "mentor" is evil or good." (by DeathPants)

It's going to be up to you to explore his true intentions, if there even is something like that.

Information on the development plans!

To give you an idea about where we currently are in development, I want to give you a little insight on our plans. Right now, we are setting the fundamentals for level 03, which is the biggest and most complex level so far. The layout is already set and one of our newest Level Designers already started to realize a part of the full level. It is still in the design phase though and only a little part of the full map.

Once level 03 is more or less set, we are going to go back to level 01 and finish it up completely and once that is done we move on to level 02 and finally 03. The testing phase is then going to start and we are likely going to invite a few people of you guys to do some testings for us. And when that's done, we are going to remove bugs, do fixes and improvements and set new milestones after that. Until we are there, it is going to take quite a lot of additional time, though, it is not going to happen within 2012, that's for sure. We are going to present new media and content with updates during that time of course to keep you updated, though.

We are currently looking for Programmers!

The main task is going to be the realization of movement features like double jumping, floating in mid-air and dashing. You are going to start with a test task first, which is the implementation of countour lines of certain objects similar to Left 4 Dead. It's no wasted time, as this is a feature we are going to keep in-game, aswell.

You can work with us while simultanously concentrating on your daily job and/or other projects, as we offer highly flexible working times. Also, this position gives the great chance to work with an extremely dedicated team, which has been working on this game for almost 2 years by now. There is no risk that this project is going to die within the next few months or so, as the foundations are mainly built. While there are no monetary rewards, we offer the great chance to produce great portfolio material. This is due to the fact that we are mainly working with professional artists, which means that you can expect high quality video footage for your website or blog.

Here is a little piece of concept art from our ideation process, which shows a snapshot of the design process we go through with every level. 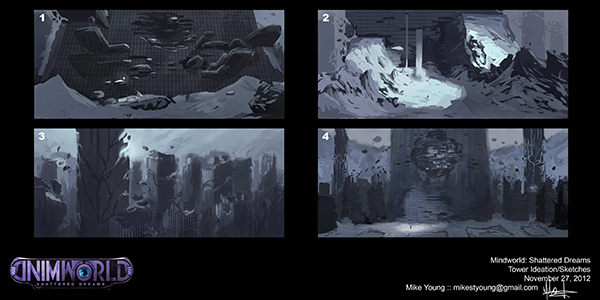 
We hope you have enjoyed this article and all of the presented art.

Looks great so far! Hopefully not too ambitious to be completed, though.

You guys seem to know what you doing. When you put the concept art next to in-game pictures, it looks exactly how it should. Really looking forward to this!

I feel thankful for having my quote there. And now the mystery is more. His voice reflects some evilness. But he sounds like he is helping you. Keeping you in a place where the dreams can be true. But maybe that isn't a good place. Maybe that place is his mind and he will be your nemesis. Maybe he'll be your ally. Maybe you will have to defeat him to know the true self of the story, we don't know. That's what I think of this game. The mystery is intriguing. And that's why I'm going to play it. Play it till the end. Play it until the mystery is nothing more. Play it until I get what this "mentor" is. You are showing me that games can be something more, something else. And I thank you for that. Keep doing this, don't let it die. Show us what you can do! And for that, I thank you. For showing us what you are. For showing us that you can make something good, like this game. I repeat myself, but maybe I'm just a "mentor". No. That's not what the mentor is. The mentor is something else. Maybe a part of you. We don't know. But we will know. Thanks for this article, for not showing almost anything and keep the mystery in our minds. Thank you.

Nice to see that you have fantastic progress!
I'm looking forward to see the 3D Model of the Character, hope you get the style!