Today I am proud to announce that Arelite Core has been accepted by the Indie Megabooth and will be exhibiting at PAX East 2016, from April 22nd to 24th in Boston. To mark the occasion, I will cover the demo I produced to present on the convention floor.

Today I am proud to announce that Arelite Core has been accepted by the Indie Megabooth and will be exhibiting at PAX East 2016, from April 22nd to 24th in Boston. It's definitely a huge step forward for the game, the culmination of four years of labor and love. Since I applied last December, I've had time to prepare for the Expo. So I've decided to write a three part “post-mortem” of my experience with the convention. This first part will cover the demo I produced to present on the convention floor, the second will go into the rest of my con approach (marketing material, press contacts, etc), and the third will be written after I'm done to go over what went right and wrong during those three days.

PAX East 2016 will be the third PAX I will attend, and the second convention showing off Arelite Core. The first presentation was in April 2015, at a small local convention, which you can read about in the post I made back then. A lot has changed in Arelite Core since that demo was shown, as I've continuously gathered feedback from players and other developers to improve the game. For example, random battles were replaced by roaming enemies, tile based travelling tuned into a free roaming system, and not to mention the plethora of new enemies, visual effects, music and so forth. It's a vastly different and much improved game, so I knew that the new build I would present would have to be representative of this.

As an aside, I think showing off a JRPG and making it exciting for a player who only has a few seconds to a few minutes to see it is a monumental task. JRPGs, and Arelite Core specifically, really rely on story telling and character building to immerse the player into its world, which can make them poor candidates for a convention hall. 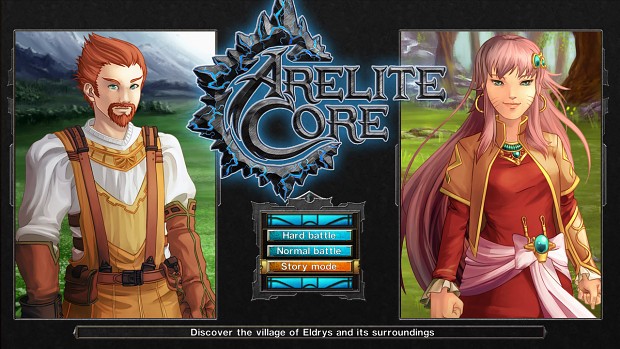 The player's options during the demo

With that in mind, I decided that the best approach would be to provide options of what the player wants to discover within the game. Through a menu, the game offers a normal battle, a hard battle as well as a piece of the story mode which lasts for about 5 minutes and ends in a boss battle. The battles were specifically chosen because I wanted to show the breadth of monsters available in the game, different environments and showcase the different characters the player will get to play as. All three modes really offer something unique and are engaging to the player in a very different way.

First the normal battle, which pits the player against the most iconic monster in the Arelite Core roster, the dalthor. This is the second boss in the game, which means it's fairly easy to defeat even without knowing all of the subtilities of the game. I've also put the player a level higher than would be expected, which gives him access to more blitz techniques and also ensures that he can take down the threat faster. This mode is for people to get in and out quickly, but still be amazed by some of the action Arelite Core has to offer. 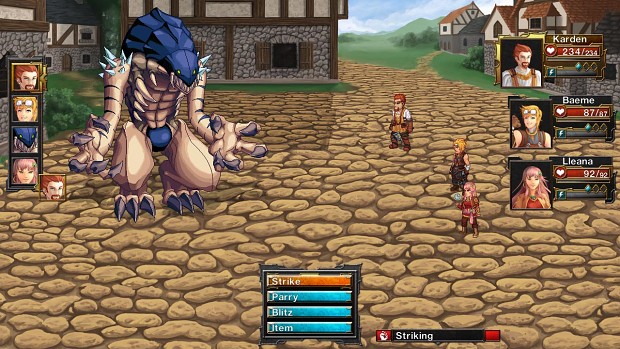 The hard battle was more difficult to choose, because a lot of the later monsters were created but not properly balanced yet. There are some sections of the game I want to keep a surprise, which procluded certain fights, and I also knew that I wanted an entirely different party than against the dalthor. Which brings us to a battle against Rakniff and 2 khanes. This is a vastly different battle from the dalthor, the pacing is different because of the three monsters, and Rakniff becomes stronger as the fight goes on. On the player's side, the techniques he has available are less obvious, there is an optimal strategy which needs to be capitalized upon. Over all, crafting this battle was useful not only for the demo, but also to properly balance the game and take battles in an interesting direction. I'm still discovering new ways to set up the monster AI, how it reacts to the player, how it evolves over the course of battle to offer a proper challenge, and this fight really presented a lot of solutions to that end.

Which brings us to the story mode. This mode is meant to discover the typical Arelite Core experience, from exploring a village and interacting with the NPCs, to traversing a forest dungeon area, battling enemies and meeting with Jean and Rieper, two of the main antagonists in the game. The player is free to see it all, or focus on whatever tickles his fancy. Either way, he has a wide array of options available to him.

I choose Eldrys because it was an early section of the game, which meant it was more polished already, it wouldn't give too many spoilers, and it was next to a short dungeon which would rapidly lead to the demo's climax. Still, Eldrys and the forest dungeon were modified and streamlined for the presentation, with any exits outside of the connection between the two removed, and certain sections of the forest also removed to make it shorter, all aimed towards giving the best experience in the shortest amount of time. 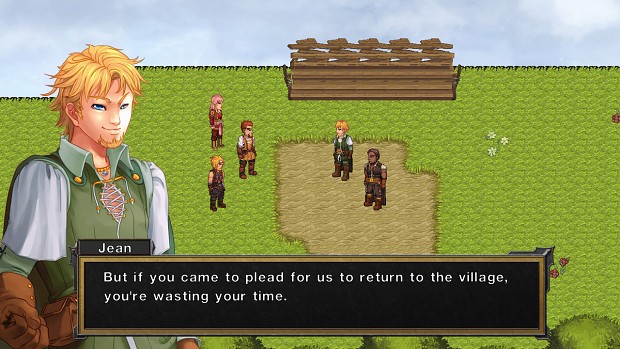 At the end of the road lies a boss battle with Jean and Rieper. Successfully completing this sequence leads to a “Coming this fall” message, followed by the game's trailer. At this point I expect a lot of the players to tune out and move along, I doubt many will get so far as to defeat Jean and Rieper.

A lot of thought was put into making the player engaged the moment he lays his hands on Arelite Core, and even getting him interested from afar. I recorded some gameplay footage which will run in loop while no one is playing, which will be turned off the moment the player presses a button. I also set up a button combination to immediately reset the game to that state. While it did mean a bit of development time, there's no doubt that it will only make Arelite Core stand out more during its biggest unveiling yet.

Next time, I'm going to cover the marketing material I produced for the convention, including shirts, swag, as well as how I am preparing to get out there and make the best impression overall.