This year, for the first time, three of us at Antagonist packed our bags and flew in the big metal seagull to Seattle to show our game at PAX Prime. That is very cool, of course, but we were also on the Indie MEGABOOTH, which is arguably the best place to be at the show. As usual after these things, we thought it might be useful and interesting to do a quick post-mortem of our trip so others can learn from our mistakes and successes. So, purely for Yoast’s SEO; here’s our PAX Prime post-mortem!

A few things we did wrong at PAX Prime:

We booked the tickets and hotel on Saturday and travelled on Tuesday.

We put off booking the hotel for weeks and weeks and weeks. No one quite knows why, but it happened, and in the end the only hotel available was the very expensive W Seattle, which was lovely and close to the conference centre, but didn’t include some essential things such as Wi-Fi. Seems like in expensive hotels you have to pay extra for such luxuries, and we did pay for it; $15 per day. Ouch!

We also left the flights until the last minute. KLM are a fairly decent airline, but transferring in Amsterdam is a bit of a pain as the airport is so huge. On the way back, after a 10 hour flight from the US, the last thing you want to do is transfer in Amsterdam and race through the airport, passing through passport control and sometimes security, etc. We couldn’t have flown direct from Oslo anyway, so this was unavoidable, but the point remains. This specific stuff certainly won’t apply to everyone, but you can generally get better flights, better seats and lower prices if you book in advance. I did a little research so I could write here how far in advance on average you should book flights, but found that there are wildly different times for each different country, from each country, so I’m afraid you’ll have to do your own research there. 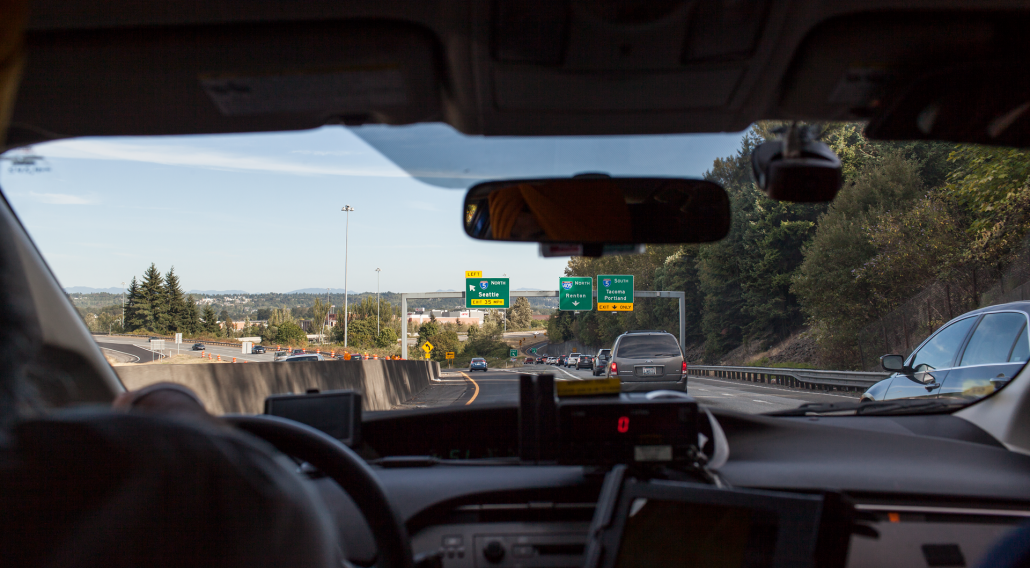 Trying, and failing, to capture the iconic ‘Driving into a US city’ signpost shot

We ran out of information flyers and cards!

A classic mistake! We had 500 double-sided flyers with information about the game printed, as we had done for GDC in San Francisco. This was not nearly enough for PAX! We had quite a few flyers left over from GDC as there we spent all our time explaining our game verbally to those who came along to the stand. At PAX we tried to do the same thing and talked to everyone who came to the stand. After I lost my voice on the third day, I started to hand out leaflets to everyone that came over to us, and explained more to them if they seemed like they wanted to find out more, which was still most people. We ran out of leaflets on day three and had to start handing out our leftover GDC leaflets. We then had to spend $480 at the show to print 500 more leaflets (on lower quality paper!) as we ran out of everything. A worthwhile expense, but we could have saved money by just printing out more in the first place.

We also had 1000 business cards printed, which were running low by the end of the show, and 350 buttons, which were all gone by the second day. You should get 1000-1500 of everything!

We all lost our voices and got sick

Staying hydrated is essential at these shows. Our programmer got sick at GDC and I lost my voice and got sick at PAX. I’m still sniffly now. Lots of throat sweets and water will help protect you from getting a sore throat from all the talking and shouting over the noise of the show.

Four hours sleep a night and too many gin & tonics probably didn’t help either, but if you can’t stay up late drinking gin in America, what’s the point in anything? 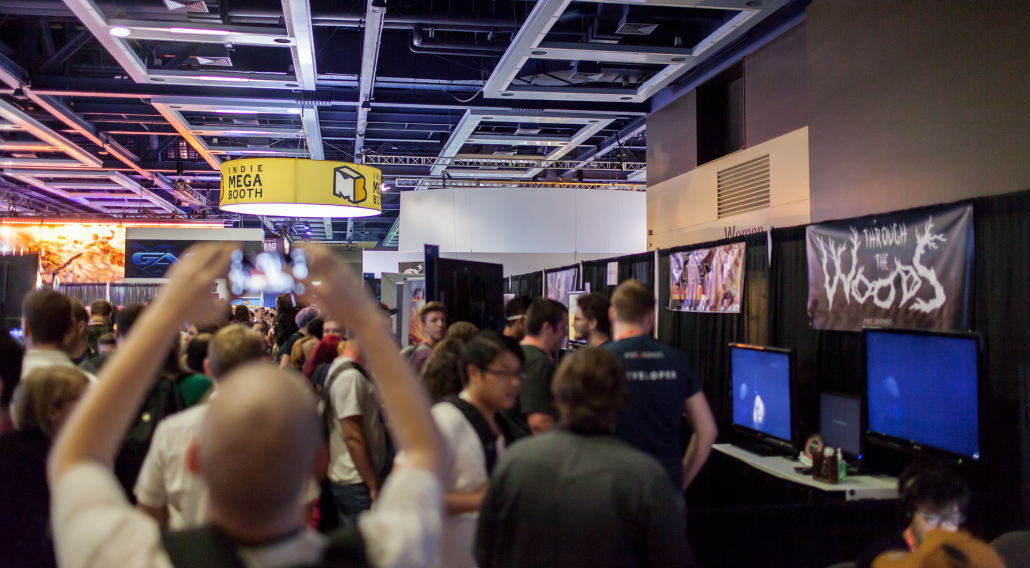 A little shot of the constantly packed Indie MEGABOOTH aisle

We didn’t spend enough time with other developers

We had a lot of lovely developers make the effort to come over to our stand and play Through the Woods, which was a very nice thing for them to do. Sadly, we weren’t always as generous with our time. There were two of us on the stand most of the time as we had another stand at the Gamespot event down the street. This didn’t leave us much time to go wandering around the show as our stand was always so busy. That’s what happens when you’re on the MEGABOOTH. The show wrapped up at 18.00 on the Monday and at 16.00 I finally took time to go exploring around the show. First I stopped at a few of the booths I promised fellow developers I would visit, then into the rest of the room our stand was in. I managed an hour or so of looking around before I started feeling guilty at leaving my comrades behind, so scurried back to the stand for the end of the show.

This is bad! Make sure there are at least three of you so one of you can always be walking around, networking and making new friends! Meet everyone! Play every game, even if it doesn’t look that interesting to you; you might be surprised.

Meeting people and making yourself known can unlock doors further down the path. 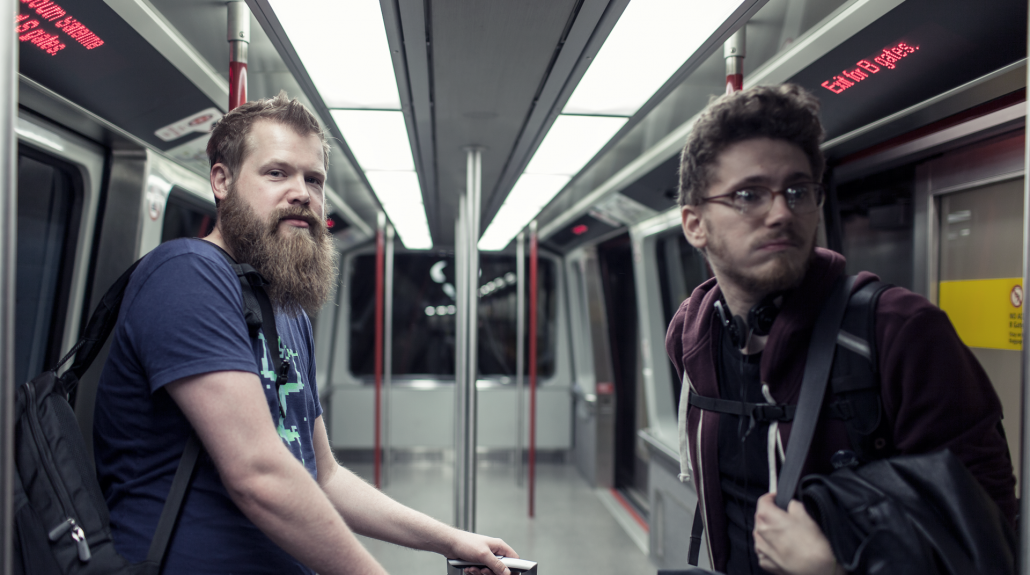 We didn’t get to see much of PAX in general

This ties in with the previous topic, but we didn’t see almost any of PAX. We weren’t there to play, we were there to work, but there are still valuable things to see and learn if you are able to take to time to walk around the show and do so. Sadly we were not able to, just like at GDC. But this will hopefully get easier the longer we do these shows. It’s hard to leave your own stand. It’s addictive to watch other people enjoying your game!

Doing these shows is like the best playtesting ever. The father of a girl I was talking to got bored and asked if he could play the game. After a few minutes I noticed he had turned around at the very beginning of the demo, walked through a tiny gap between a rock and a tree and had found himself in a massive, untouched area of the level that looked like Mars. Everything in this area had been removed except the ground texture, and the guy had just been walking along, laughing! I had to walk him back to the gap where he slipped through so I could find out where it was so we could fix it after the show. This was a little embarrassing (we had a big crowd at the time) but mostly amusing, and very useful!

Every night we fixed all the problems and bugs people had uncovered, rebuilt the game and transferred it onto the computers the next morning before the show opened. This sounds kind of like a good thing in a way, but we all feel we should have had a much more stable build before the show, and that we probably shouldn’t have still been working on creature A.I. at the hotel after a 15 hour journey and no sleep. 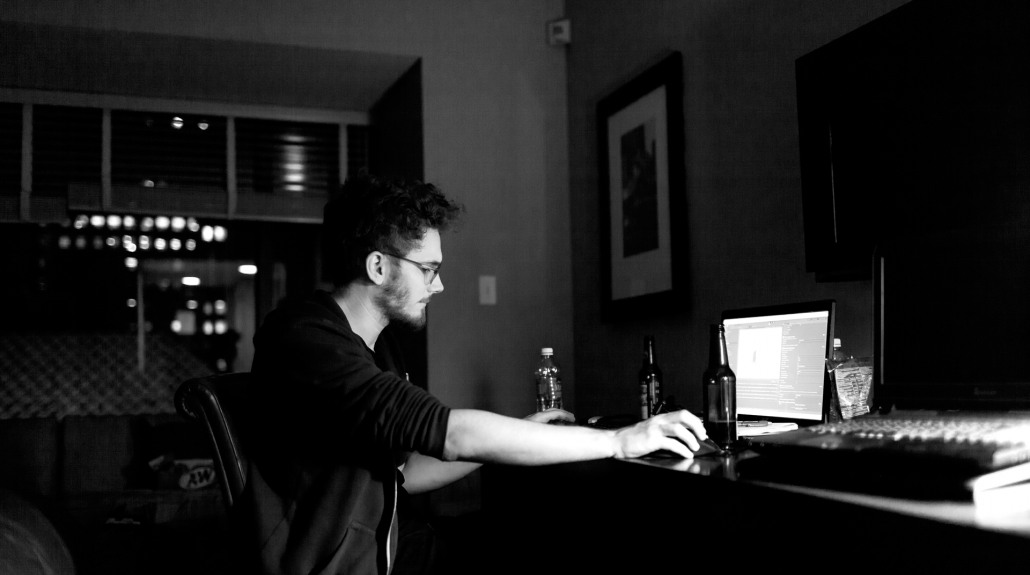 Torstein listening to Chet Baker, drinking beer and looking depressed, as he is wont to do

A few things we did right at PAX Prime:

As always, we were branded up to the gills with a huge banner, a trailer always running in the background, leaflets with information on, Through the Woods t-shirts and badges, etc.

I’m not sure we could have really done much better here unless we had one of those of retractable pop-up banner stands. But those things… they’re literally never good. Ever.

We paid for an extra TV

We paid a little more to get an extra flatscreen TV. I think this was a really good move for us as we were able to have two people playing the demo at the same time, and had the small computer screen between them playing our official trailer on repeat. There were so many people we actually could have easily put three or even four TVs to work if we had the money and the space on the stand.

As a side note, one of our TVs didn’t work when it was delivered, so we had to run around trying to find a new one. We managed to get a spare TV from the lovely guys at Double Zero One Zero, who were next door to us. The screw holes that were used to attach the TV to the stand were worn smooth which meant the TV was just resting on the screws. The other TV wasn’t compatible with the stand at all, so we had to put it on the table.

Gaffer tape was used. Prepare to improvise, prepare for there to be unforeseen emergencies and, most importantly, bring gaffer tape! 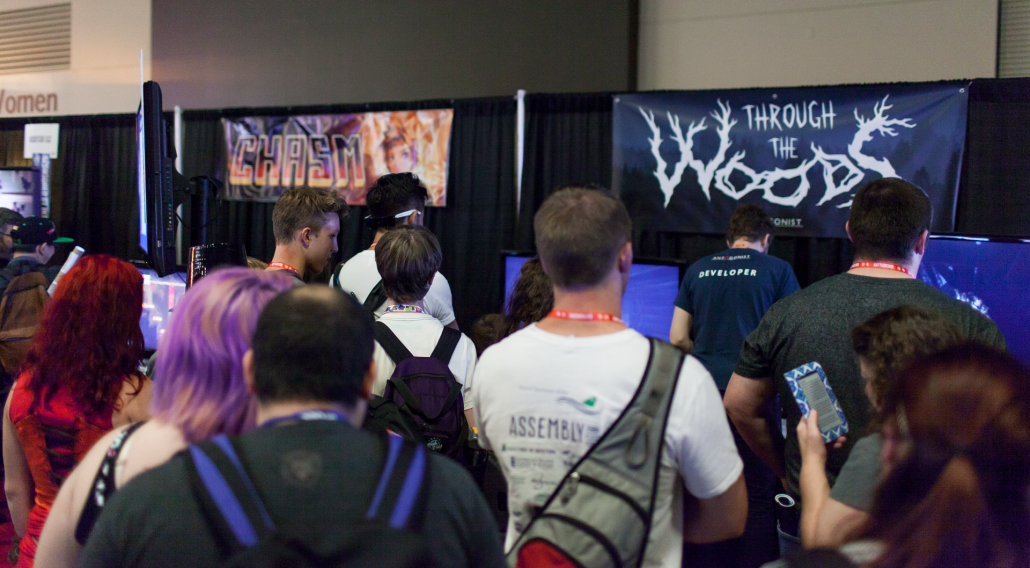 Here is our stand, packed with adoring fans

We talked to everyone, or lost our voices trying!

Everyone who came along to our stand got an absolute earfull, whether they wanted it or not! We explained everything about our game from the story, to how we collected the photographic textures and sound effects. Everyone left our stand with a better sense of appreciation of the lengths we have gone to to create an immersive atmosphere. Eventually we were shouting to whole crowds of people instead of going one on one to save our voices a little, which did not work, but did inform more people faster.

We used the trip to go to other showcase events

Spreading ourselves a little too thin by showcasing at other events turned out to be a little tiring in terms of our PAX experience, but was invaluable in terms of covering the city of Seattle with our presence. We showed at a very cool public Microsoft event the day before PAX started and had a small stand in a bar down the street from the conference centre at a three-day event called Gamespot Presents. Spreading yourselves thin is not good. Doing three interesting events in one city over five days is good. We were a little unbalanced when it came to personnel, but the positive effects of getting our game out there in several different ways tipped the scale. 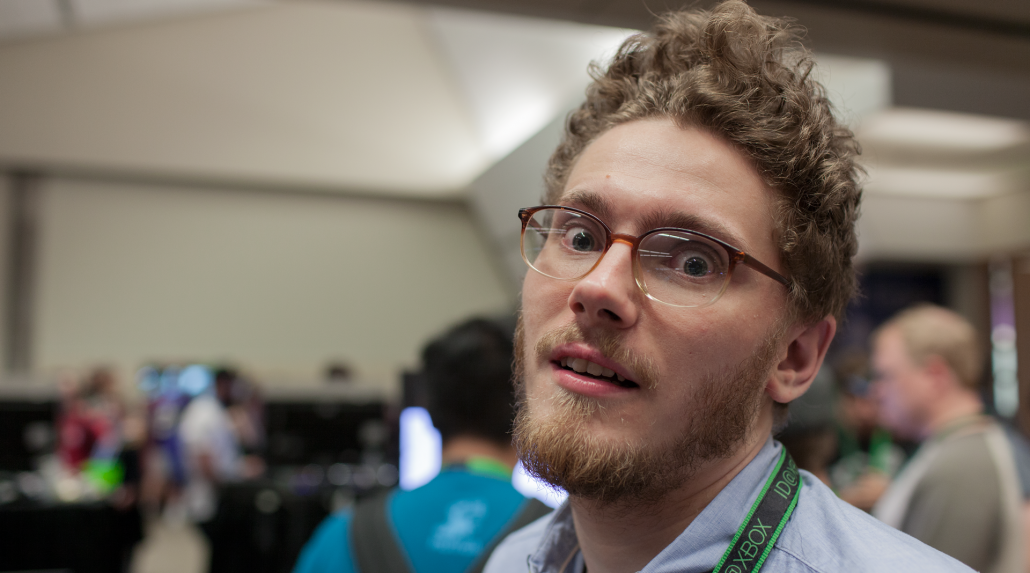 We harboured a sick girl on our stand

This, of course, is just to show that we are nice people. A girl who had played Through the Woods earlier in the day returned to the stand later feeling ill after messing around with some kind of virtual reality device. We let her sit down on our stand for a bit while her motion sickness subsided. I’m not convinced sitting down watching people play our game helped that much, but we got an email from her thanking us a few days later, so I’d say we gained a friend and a loyal fan there!

Ok, that’s I can think of right now. Hopefully there are some things in here which someone out there might find useful. If so, please let us know! 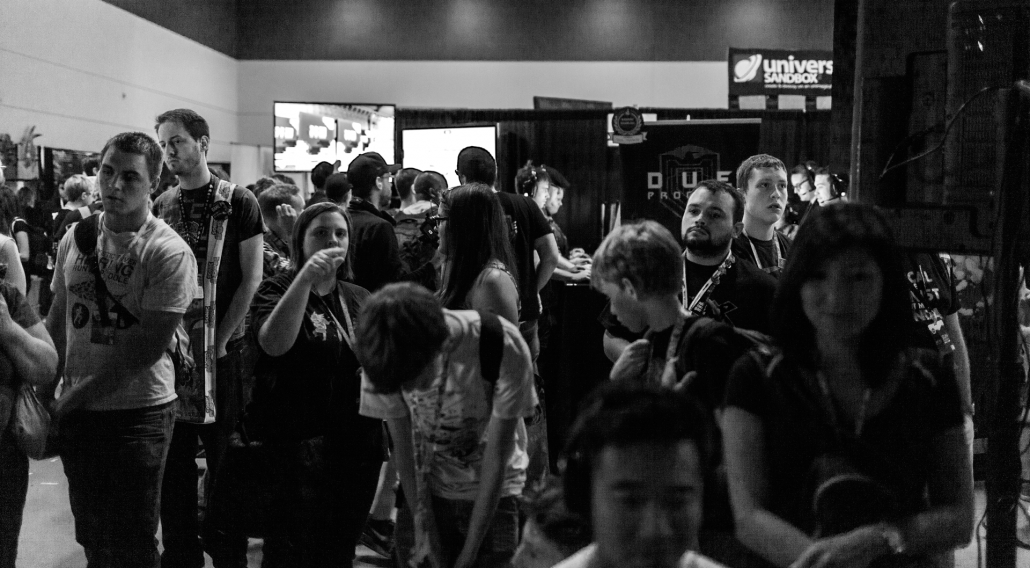 Thanks, PAX! See you next time!

P.S. We were lucky enough to be given a tour of the old Black Mesa Research Facility in New Mexico a few days before we arrived at PAX. Here’s a little bit of footage of the journey into the complex.