Announcing Absolute Drift: Zen Edition coming to PS4. A collaboration with FlippFly, the creators of Race the Sun. 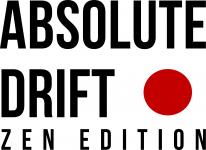 In Absolute Drift: Zen Edition, players will learn to master the art of drifting, through a series of challenging events played out in a gorgeous minimalist environment.

Absolute Drift was originally launched in 2015 by Funselektor Labs. Kotaku said about the game: “Absolute Drift is unexpectedly mesmerizing.”

Flippfly is working with Funselektor Labs to develop and publish the Zen Edition on the Playstation 4 platform. The two companies are working together to add several new features to the game for the Zen Edition, including:

The Zen Edition of Absolute Drift will also be available on Steam as a free update to the original version.

“We’re thrilled to be working with Dune at Funselektor Labs on this project,” Aaron San Filippo of Flippfly said. “When we saw the game’s unique aesthetic, we fell in love with it, and we’re excited to help expand the game’s content and gameplay to make it even better.”

“FlippFly has brought their experience and know-how from Race the Sun to spearhead this new edition with some great features. I couldn’t be happier about this collaboration and I’m honored to be working with them!” said Dune Casu of Funselektor Labs.

Launch trailer, images, and more can be found for the PS4 version here:

Flippfly LLC is an indie game company in Wisconsin, USA, run by two brothers. Flippfly first launched Race The Sun in 2013, and develops games for PC, Mobile, and Consoles. Visit our website at Flippfly.com<, and contact us via contact@flippfly.com