Hello a bit of news Annex old page on Moddb has been converted to an Indie Game on Indiedb. Please note the old page is no longer active. Also some new development news:

Annex changed from mod to Indie.


Hello a bit of news Annex old page on Moddb Moddb.com has been Upgraded to an Indie Game on Indiedb Indiedb.com. Please note the old page is no longer active.

Its been almost 3 Years of developement as a standalone mod, but I'm finally going to classify Annex as an Indie game. This is how Annex should have been classified from the start. If you have played Annex and Megaglest before you can see Annex is more than a mod, and now its even bigger than before. I guess it was my confusion about the technicalities of what is a "game" vs "mod". But thanks to the devs here, Annex is now situated where it should have been all along. Now there is just the issue of changing the links over the internet -.-
Don't worry though you should not be effected by this change, other than maybe updating your bookmarks. 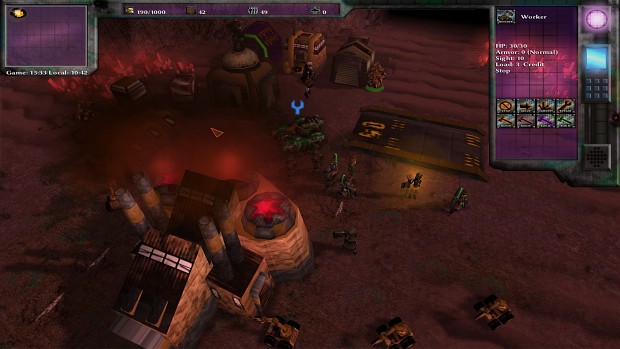 In release 3 I introduced a techtree called Insanity, which combined both Alliance and Shadow into one faction with no prerequisites. Now Annex grew to 4 factions and like before I combined all into one faction. However, due to space constraints, I cannot combine all infantry and vehicles into single barracks/factory as I did in the past. So to combat this I divided all the faction's buildings and vehicles to their own structure, meaning separate buildings for either Alliance, Renegade,Shadow or Republic. Each of these structures are built from their own tab under the worker unit. (as seen in screenshot)
Note,All faction tab produce the same Refinery (as its the only main structure) and Silo (for super weapons) Also upgrades are no longer Available. 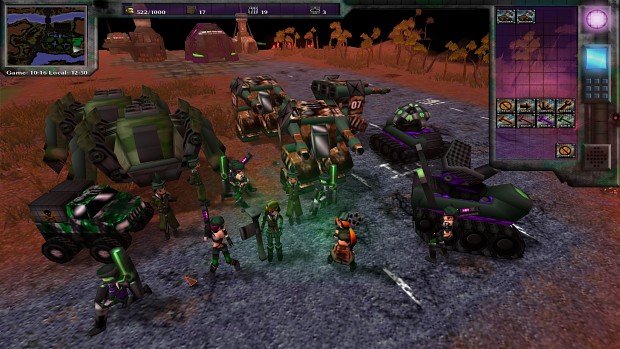 All Heros, Elite Units, and Super weapons were available at your disposal. I found out it is entirely possible to build this special army, however this requires a lot of money/time to be possible, as you will need structures of all kinds to be able to build such an army, also you will not be able to have any other units, (if you see i have 19 slots left thats enough for only 3 harvesters) I wonder if Its possible to win with a strategy like this...

New Techtrees:
- Added Half Damage, Double Damage, and Simple Battle techtrees variations
- Half and Double Damage are simply 0.5x and 2x default values in the techtree xml
- There are a Half Damage and Double Damage variation of all main techtrees indicated by an H or a D at the end of its name (example: Pre Deployed D)
- Simple Battle and Simple Deployed are special techtrees that reduces factionunits to these standard classes: Worker, Basic Infantry, Anti Tank Infantry, Harvester, Light Vehicle, Main Battle Tank, and Siege Vehicle.
I choose the units closest to those types. No heros, Super weapons, or aircraft. Good for new players who may otherwise be overwhelmed by Annex's large techtrees.
- Updated Infantry Only Mode to include Republic units such as Officer, Sniper, and Grenadier.
No Renegade units as they are exactly same as the Alliance Infantry, however I changed all structures to the Renegade equivalent to give them a presence in this mode.
- As of now there are a total of 33 Techtree variations in Annex!

Sound:
- As of now I removed unit Voices as they are far below the quality of the rest of the game.
- Battle sound fx like Guns, Missiles and Cannons were greatly improved, Thanks to MichaelB!

Annex Home Site:
Annex home site almost done. Actually
site will be focused on Annex but will also be about any past/future
games I plan on releasing as well.

Currently waiting to set up a small forum and then I will make its announcement here!

So what is left?

-"Core" (gameplay, techtrees, Factions, Maps, and Tilesets) are done and ready to go!
- I need to get music for the Renegade and Republic (3-4 songs each) probably get it from Newgrounds like always :P or maybe ill just use same music for now and update in a later release.
- I will need to update Annex's "Starting Guide"
- Annex home site and forum.

Whew... Thanks for reading all this! Feel free to comment question below!
Get a copy of "Annex: Conquer the World Release 3" Here:

No need for Annex Beta 2 or Megaglest to run!
PS Mod DB Downloads may not be up to date!!!! Please get from locations below:

Get a copy of "Annex: Conquer the World Release 3" Here:

No need for Annex Beta 2 or Megaglest to run!
PS Mod DB Downloads may not be up to date!!!! Please get from locations below:

What's the difference? The pages are interchangeable aren't they?

Yea I can understand where you were coming from. However, one of the biggest drives for this was that as a mod I felt more or less limited to a community centered around the parent game. While Annex broke out of that somewhat being seen as standalone mod, It still felt overlooked due to it being a mod for a relatively unknown game, when compared to mods for Command and Conquer, StarCraft, etc, etc... I feel that many more would be interested to try Annex if its identifiable as an Indie game.

I apologize for such a drastic change so suddenly. I know the move sucks for now but once all the kinks are worked out I feel Annex would benefit a lot more after this.