And in our second monthly devlog, we will talk in-depth about how animal exchanges work in Zooconomy.

Hi everyone. It's Denis here from Curious Foxes. And in our second monthly devlog, we will talk in-depth about how the animal exchange works in Zooconomy. Let’s get started.

Video version of this devlog is coming with the second part.

Each species in the game has its own base exchange rate. Let's say that a roe deer has a rate of 4 and a red panda of 18. And we can exchange 1 red panda for 4 roe deers. Additionally, each animal in the game has several parameters, such as age, gender, health, and etc. You can see these parameters in many menus, but more often in My Animals menu. 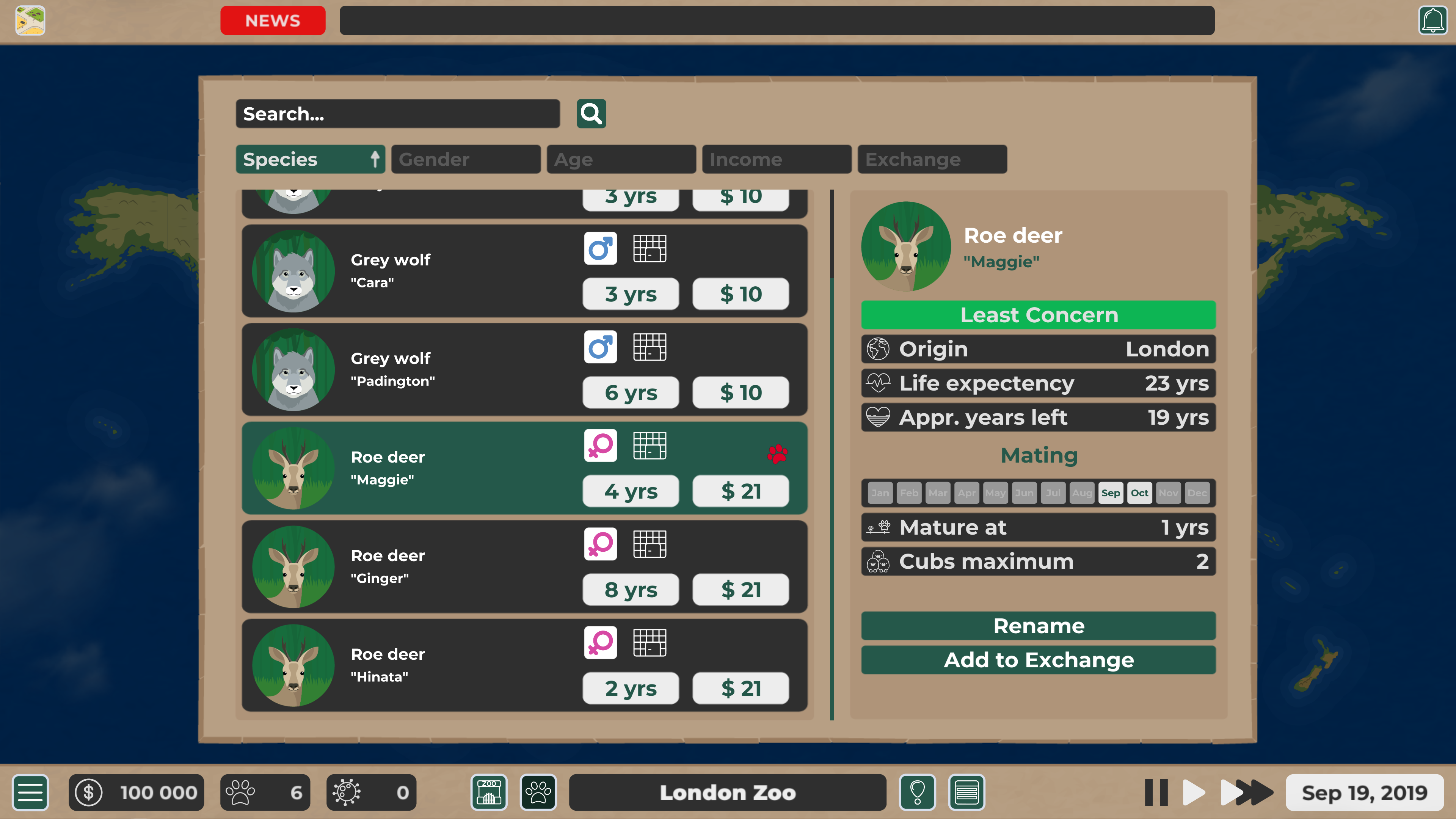 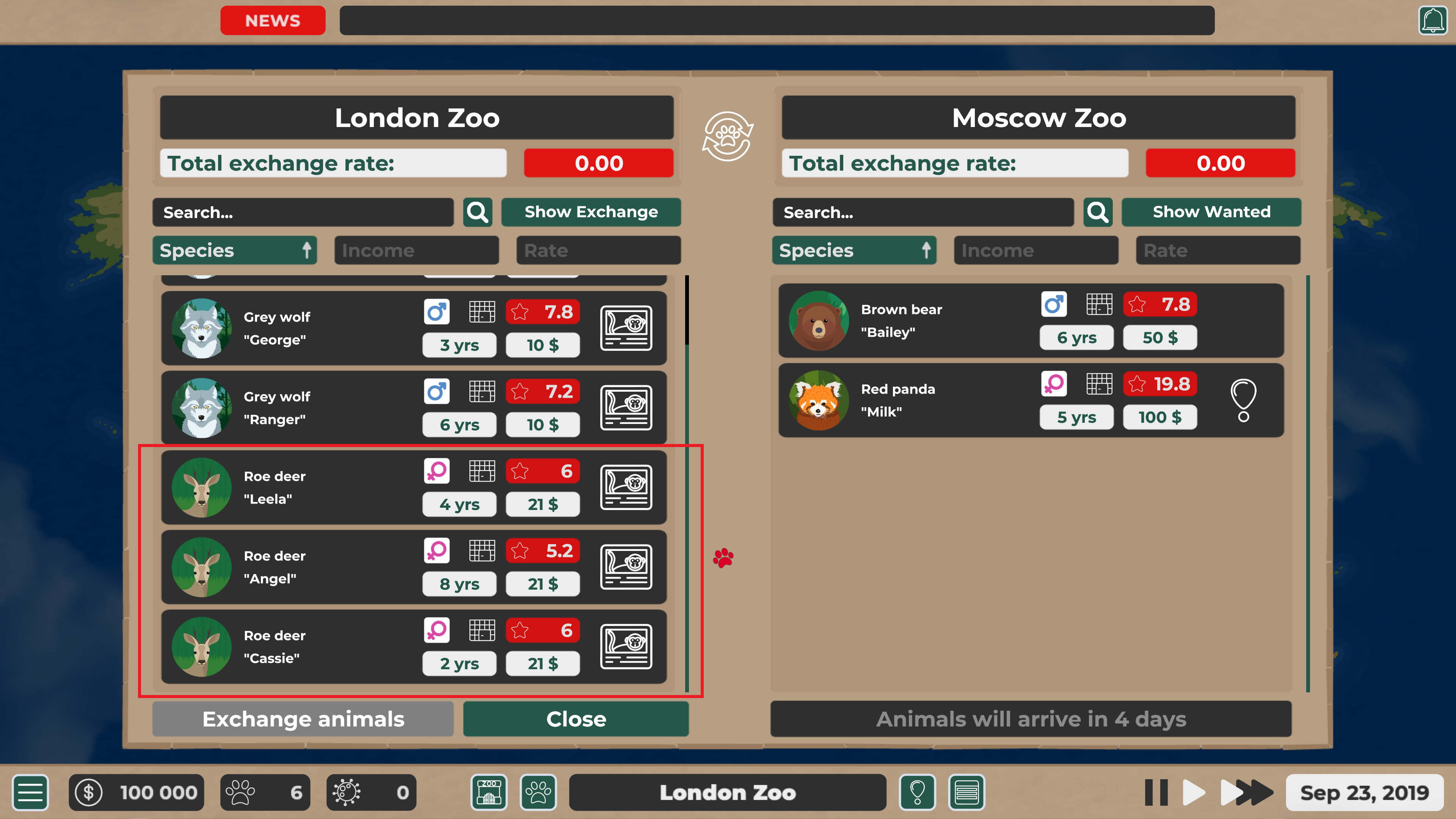 As you can see they all have a higher exchange rate. First of all, they are all female. Secondly, Leala and Cassie are young roe deers, so they get even higher rates.

We can't expect all zoos to want the animals we have to exchange. Other zoos also have desired animals and they will exchange them for at least some of their wanted animals. Players can see the list of wanted animals in the Zoo info menu or in the Exchange menu. 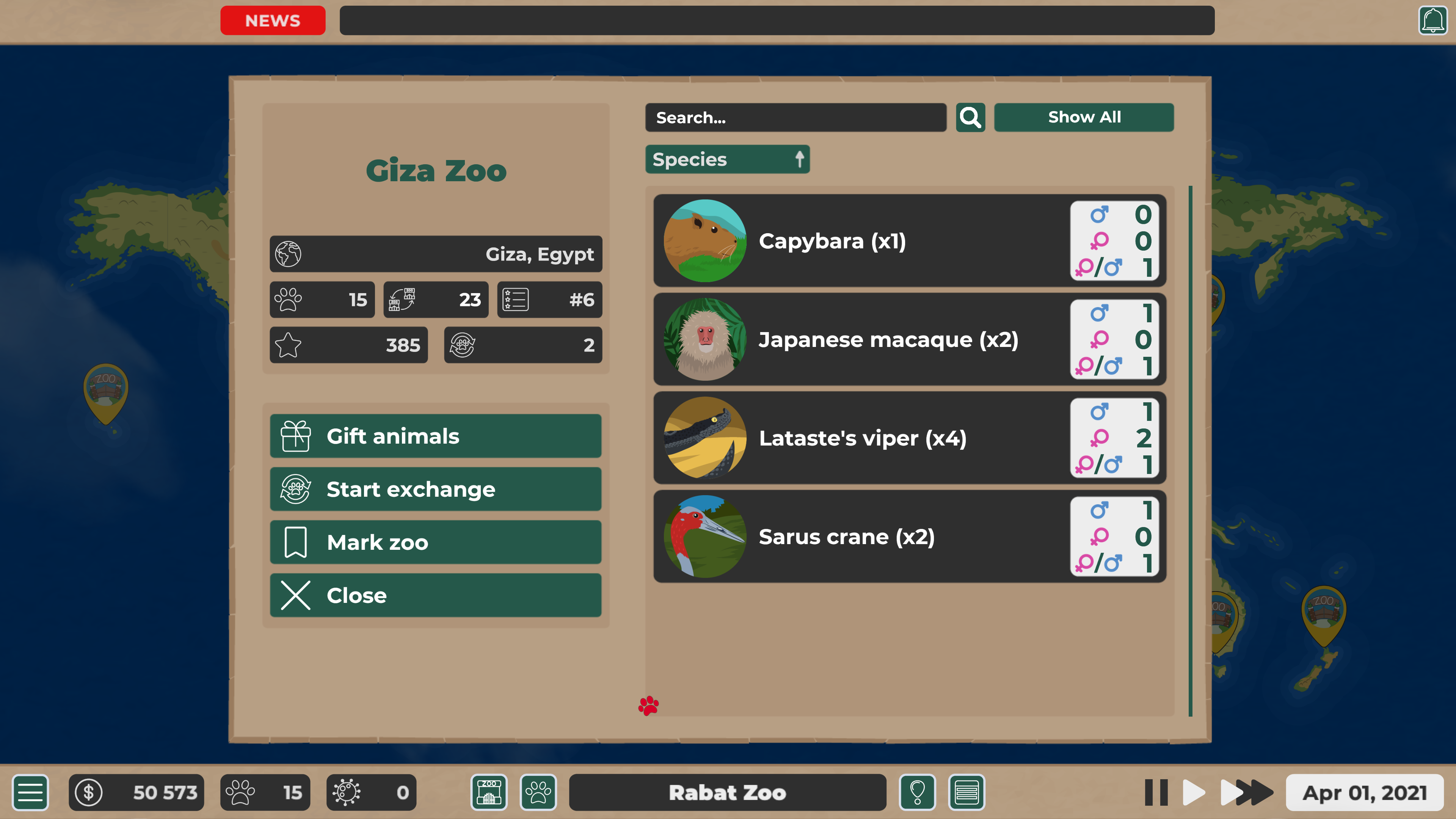 Additionally wanted animals will be marked during the exchange process. Also, zoos might want gender-specific animals. 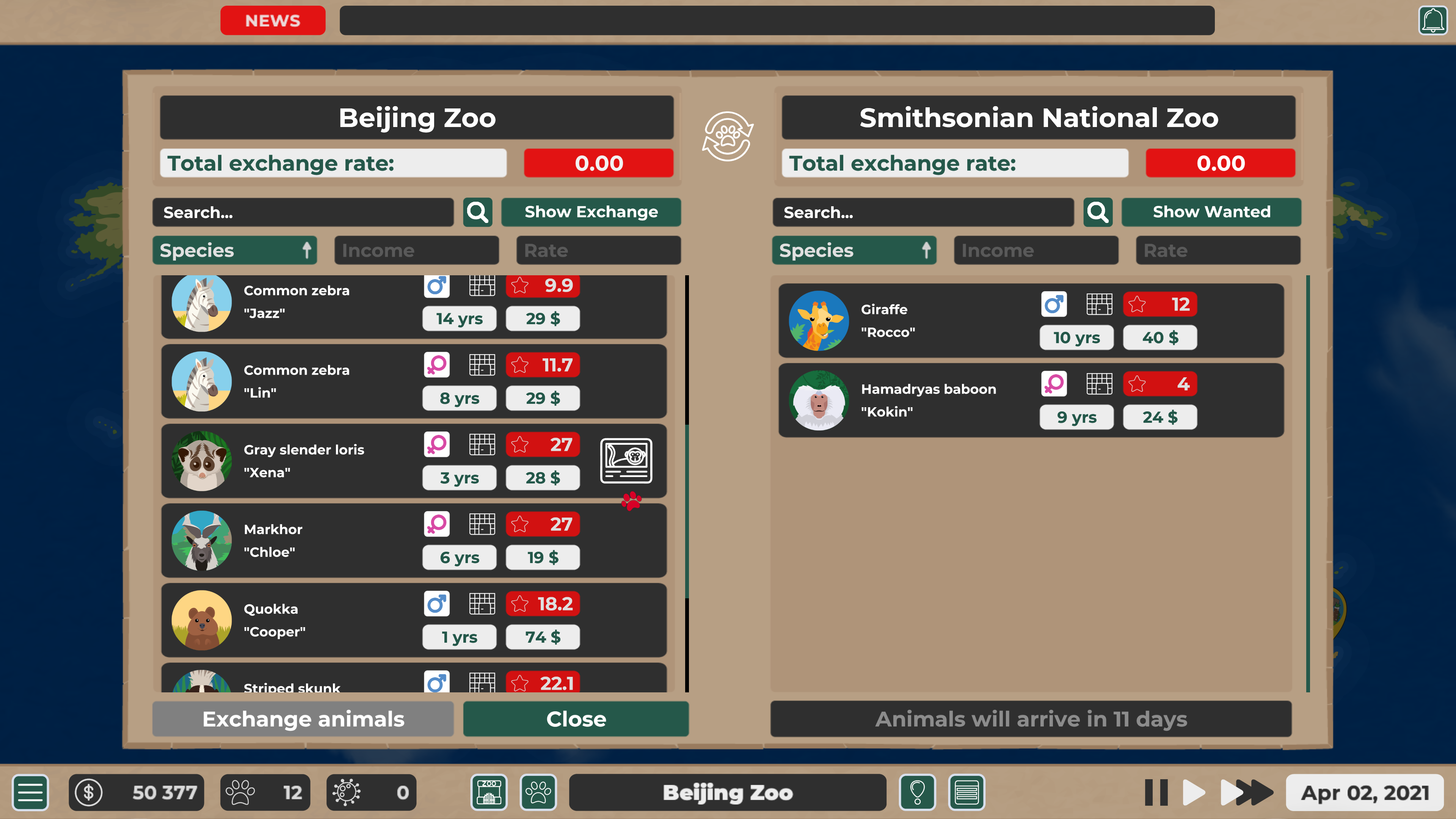 But besides wanted animals zoos have exchange animals. In the example above, this zoo may not want our orangutan as well as not want to exchange its pangolins. Each zoo has its list of animals that it wants to exchange, so during the exchange, we can select only from this list. Players can see all the zoo's animals in the Zoo info menu and in the Database menu, and all exchange animals in the Exchange menu. Also, animals for exchange are marked with an icon on the list of all animals. 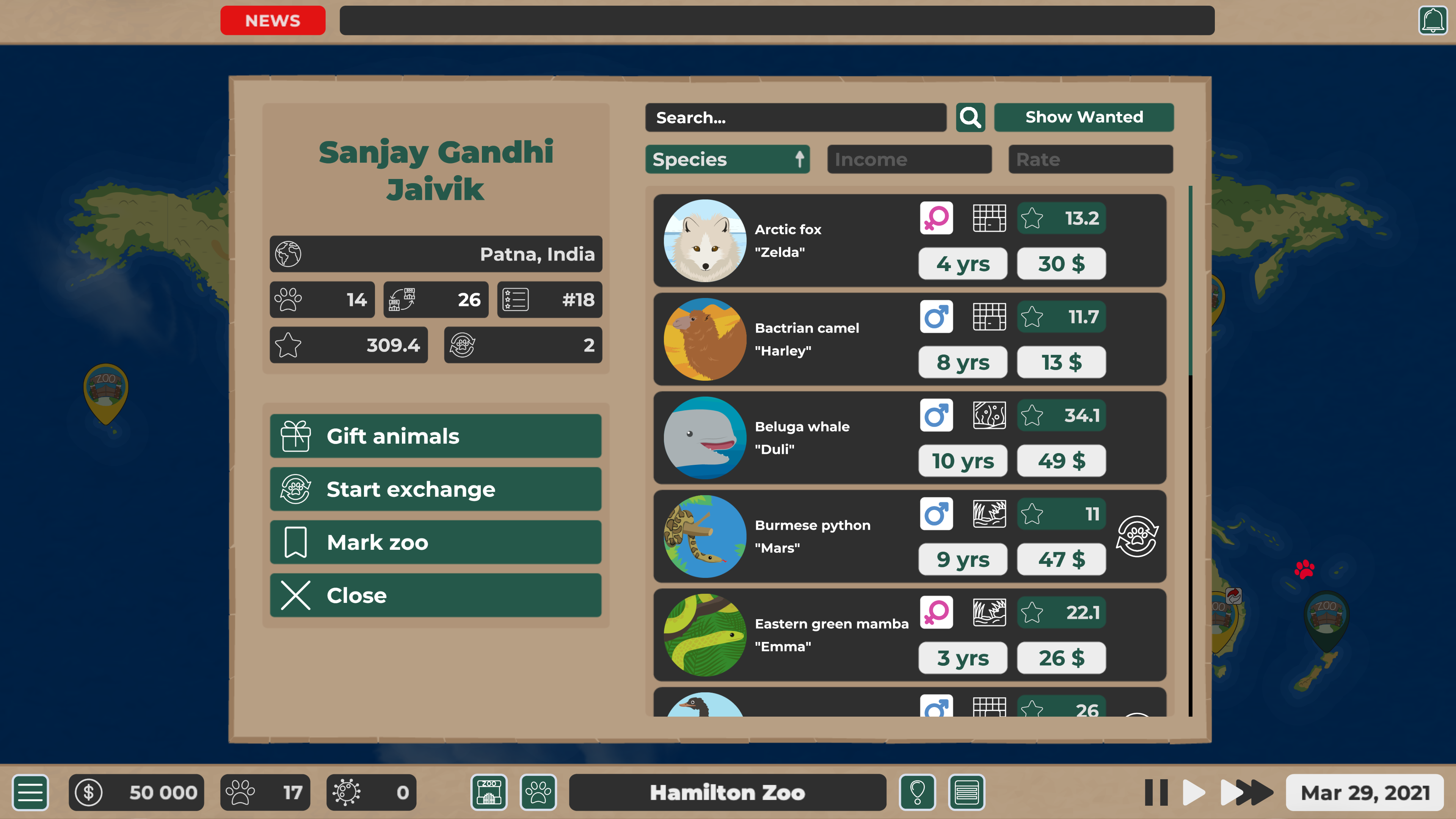 To select any animal we want from the zoo list and to exchange them for any of our animals we can increase our relationship with this zoo.

In the second part, we will talk about relation with zoos and we will breakdown the exchange process. That’s it for today, thank you for reading, and see you next time.