Sneak preview from Ancient Kemet an indie MMORPG! This is the fabled land where one of the most fascinating story was written. It is the beginning of a civilisation that has its future in the hands of its own people. Now it’s your chance to embark on a journey and choose your destiny in the land of Kemet.

Whether you prefer the life of a mighty warrior, a farmer or a craftsman or even a fierce town leader, Ancient Kemet welcomes all. The gods left the land to be ruled by its people and Kemet needs its people.

The gods, who set the foundation for the Kemet civilisation have left the land and their legacy to the people of Kemet. Was it too soon? Was it the right decision altogether? For althought they put in place rules and structures with the intention of happiness and prosperity of all, these days Kemet does not seem much like it is described in legends from the past.It was many years ago since the gods left and although they are kept in high esteem and the stories are still being told, the harsh reality of life in the fragmented land around the Nile makes it hard to believe that this is the Kemet gods left for us. 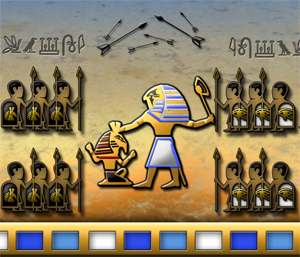