So we've released the new version of CHARGE!, what are we up to now?

The release of our CHARGE! prototype was more successful than we could have ever imagined, with over 335,000 people seeing the game in the numerous videos you guys have been uploading to Youtube. Unfortunately from those videos a lot of you who came here to download the game for yourselves and were unable to due to some strange issues with the IndieDB server mirror system, but we've now provided Mediafire links on all the individual OS download pages. This doesn't fix the core issue itself but hopefully it will let those of you who were having the problems to give the game a shot if you're still around. 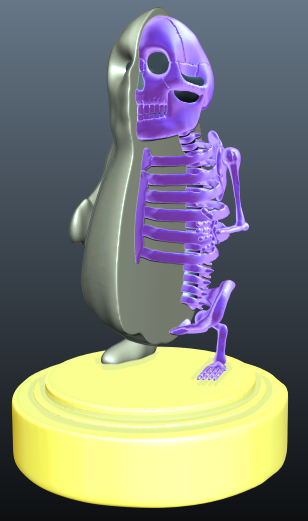 Issues aside, we're all happy about how this version of CHARGE! was received and we have a lot of ideas for what we could do with the game if we end up going back to it and remaking it all into a full product. One of the things that was to be in the 1.1 release but couldn't make it in due to the rushed nature of our character model from the 48 hour was the glowing skeleton model you can see to the right. The idea behind it being that it would appear through your skin during electrocution and when you walk through X-Ray machines. But we had to cut it in order to get 1.1 out.

Of course the changes we have in our minds range beyond simply more assets and better effects. If we go back to CHARGE! we will begin from scratch, taking the knowledge we have from our existing release and building an all round better game. Better design, performance, art and straight up more content.

But we aren't going to be working on that just yet.

So, what are we doing now then?

Well we're making other games, or at least test versions of them. So far we've been developing them in 1-2 week sprints, and have 2 different projects behind us, one of which we'll be showing you...now!

"Starting as little more than an intelligent animal ,you must survive the elements, create tools and eventually form a family and tribe in this dangerous prehistoric world where you must use your wits and thumbs to overcome creatures much faster and stronger than you. Set in an open custom designed landscape tailored to let you play how you want that integrates small snippets of pre designed story and events which seamlessly weave into and react to your own characters progression."

Bit of a larger scope compared to CHARGE! eh? Well, the above would be the goal for the long term project, what we actually focused on for the two week prototype was this.

"The player’s goal in the prototype is to sneak their way into a raptor nest in the middle of a forest clearing. There is a raptor group patrolling the area that the player must avoid, or kill along the way."

A lot of the development time of our sole programmer Alex went into the enemy AI. If we're going to make a game like this and have it work, we need AI that we can drop into scenarios which will be self sufficient and interesting to battle in their own unique ways. What we made ended up being more of a vertical slice of third person stealth gameplay and the key problem we ran into was that the raptors were a tad more than way too deadly and kinda impossible to sneak around. Primarily because we hadn't yet been able to develop the combat system enough for the player to fight back. Them's the kicks of these rapid fire prototypes, the AI was definitely more important to the experiment overall and so that's what we were able to put the effort towards. That said we definitely like what we had and can easily see where we could go from here, having learned a lot in the process.

We know text is pretty boring, we kinda hate reading through a lot of it too, so how about some pictures? With text in em! 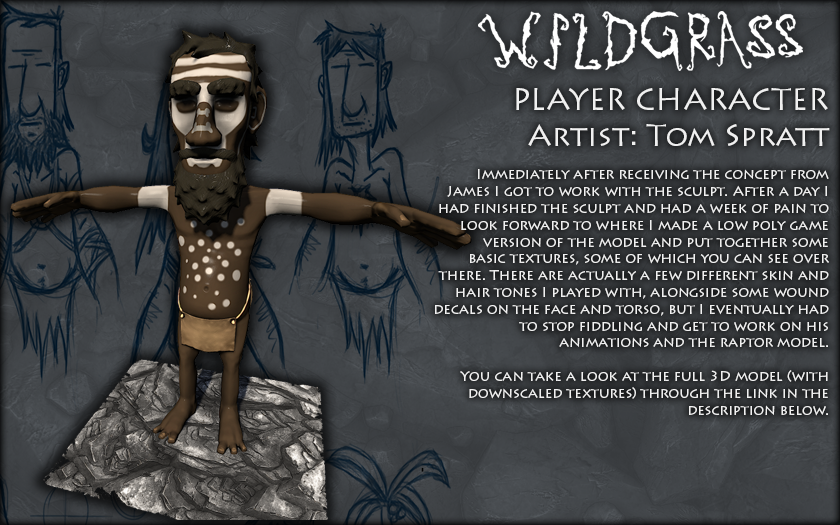 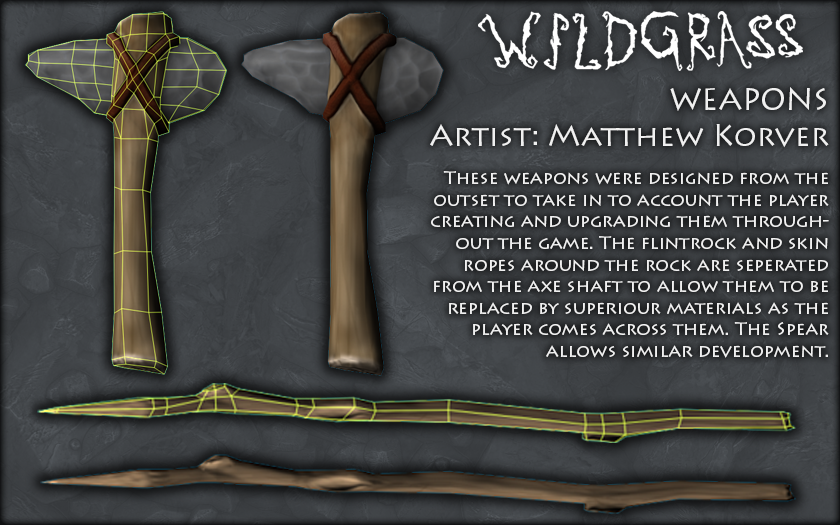 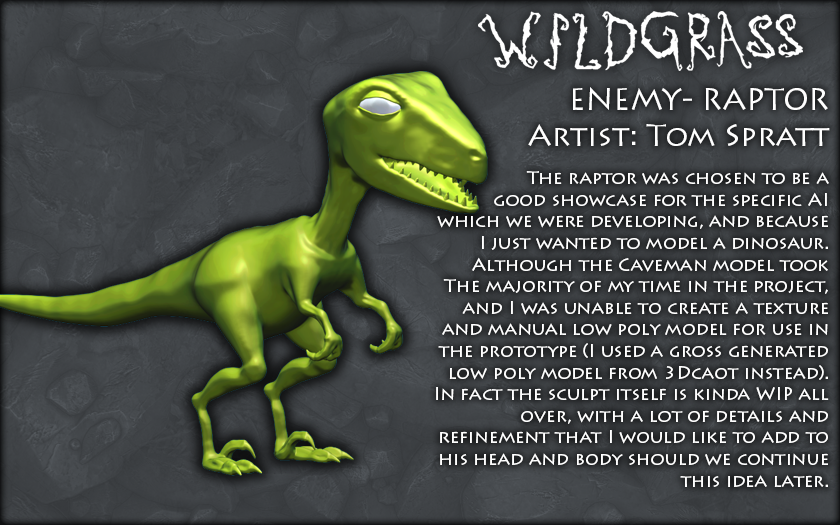 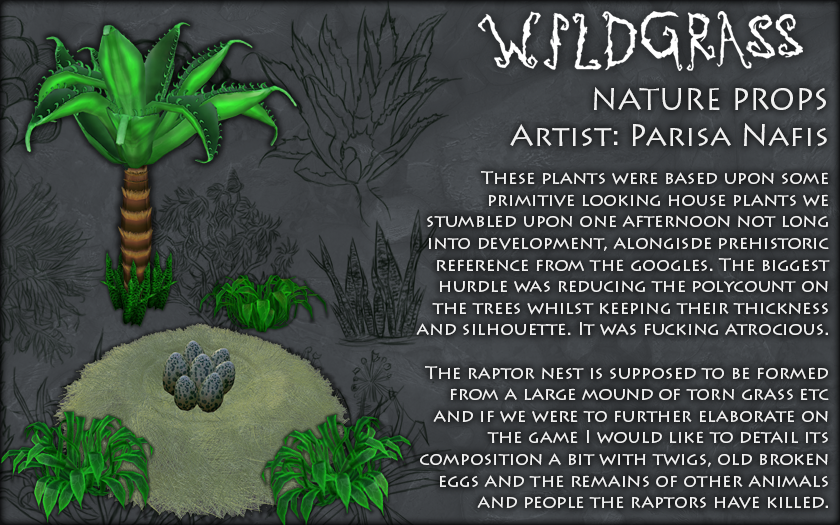 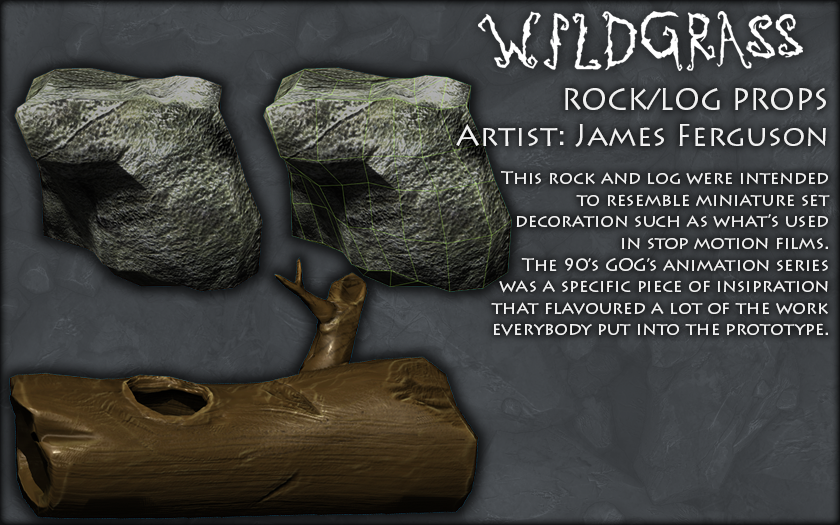 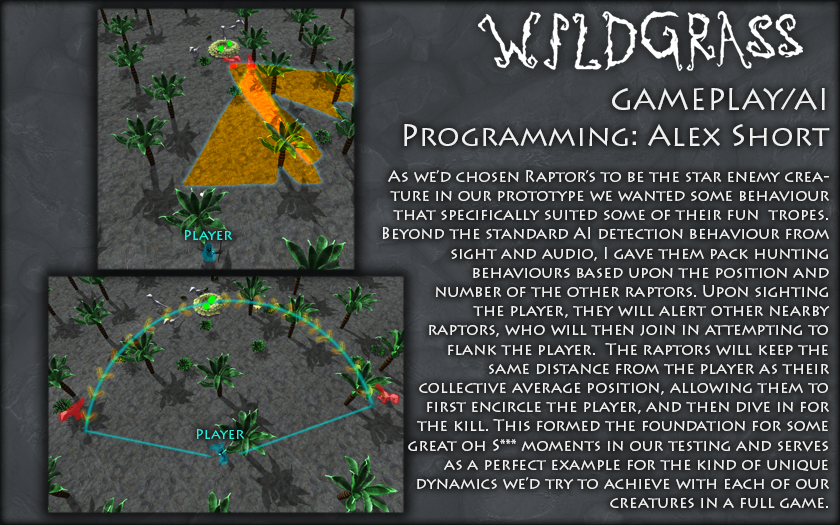 Our Caveman project came out of the discussion for another pitch and the sudden realization that we could try to do something about the unacceptable drought of games with a prehistoric setting. While we obviously settled upon something a little far from the reality of the era (dinosaurs yo) we feel that we've captured the essence of what we were going for thematically, and we're pretty happy with the outcome of the prototype overall even though we didn't quite approach the level of polish we were after. 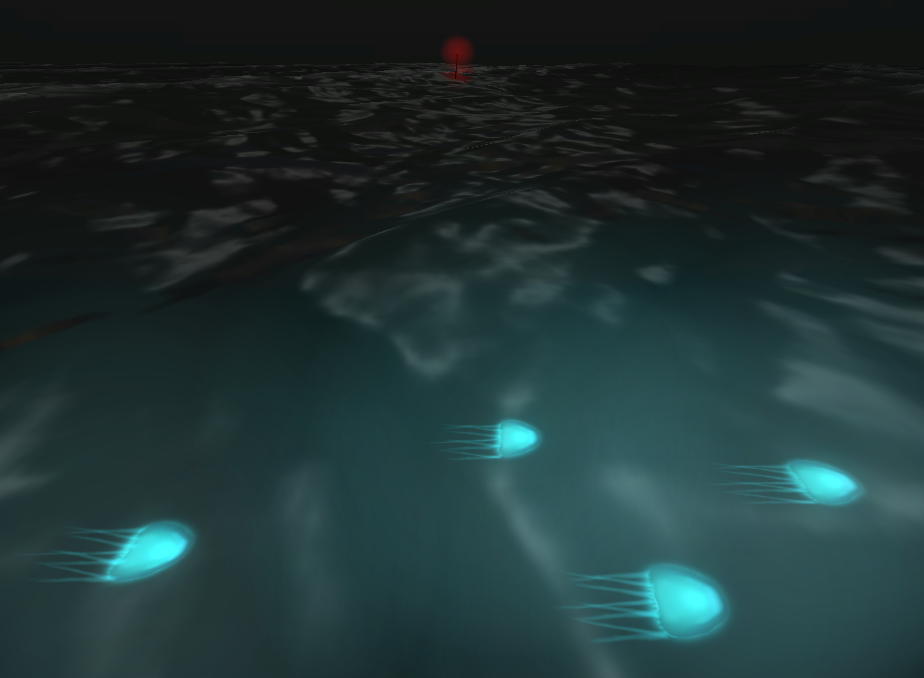 We'll be trying to make these news articles a bit more of a common thing as we go through the year. Expect the next news post to detail our third prototype sometime in the next few weeks.

Let us know what you think of this blog below. Any feedback for this style of open development would be great to see if it's worth the effort of exposing some of our inner workings during these early game prototypes. It does require a fair chunk of work to get this stuff out there, so we can only hope that some of you find it interesting.

See you in a few weeks!
Tom.