In last week’s update we talked about what we feel needs to be improved regarding contracts in the game, and introduced new mechanics to do just that. This week we’ll walk through one of the new contracts together to get a better feel for how those may branch out and how you can affect their outcome. Onwards!

In last week’s update we talked about what we feel needs to be improved regarding contracts in the game, and introduced new mechanics to do just that. This week we’ll walk through one of the new contracts together to get a better feel for how those may branch out and how you can affect their outcome. Onwards!

The contract we’re taking a closer look at today is the ‘Raid Caravan’ one. For a long time there have been requests from you guys to be able to raid caravans yourself - and now, you can. It’s not the same as living as bandits, but it’s the shadier side of mercenary business where your employer cares little for the life of a few peasants if it furthers their agenda.

Because we want to also portray the less chivalrous side of mercenary life, and give you options on how to lead your own company, we have a bunch of darker-themed contracts and decisions available. Being hired to slaughter a bunch of peasants, let no one escape alive and burn down their homes, may not appeal to everyone, and that’s ok, but it’s a way to earn some easy crowns because those peasants will hardly put up a fight against hardened mercenaries.

Your inclination towards actions such as these are now measured with a new ‘moral reputation’ scale, which reflects how people know you to act. If you’re particularly bloodthirsty, people may fear you just for your reputation, which may even unlock some additional actions in contracts and events, while being known as kind and merciful may garner you the goodwill and support of the people.

Because we’ve covered contract negotiations in last week’s update, we’re jumping straight to the action. Your employer hired you to raid a caravan, kill everyone and burn everything - their motivations for doing so vary throughout the game, the specifics will differ, but the general structure of the contract remains the same. You’re given information on a caravan travelling from one settlement to another and have to intercept it on your own terms. Predict the way it’s going to take, pick a good spot, pick a good time, and attack. 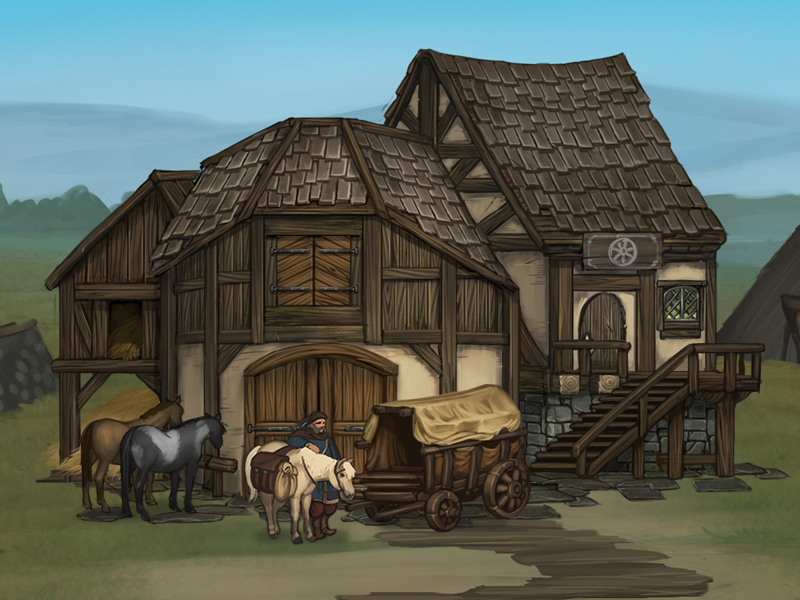 As you close in to attack, several things can happen. You may be spotted, and the caravan leader may seek a parley to offer you a bribe. You’d just have to return to your employer and tell him that you failed to catch up to the caravan. If you accept, he may even offer you a second bribe to name your employer. Failing to destroy the caravan will hurt your reputation either way, but naming your employer is a betrayal - and if your employer were to find out, he might seek revenge, and will certainly not want to trust you with contracts for the foreseeable future. But then, how should he find out? And it’s a lot of crowns you’re offered.

The caravan may have also taken up travellers along the way. One of them could be a swordmaster, a dangerous opponent that now threatens you to leave alone the caravan that so graciously took him along. Is fighting him at the risk of losing good men worth it for what you’re paid?

Closing in on the caravan successfully, you have several options. You may choose to encircle the caravan for different starting positions in battle - helpful when your orders are to leave noone alive. So are wardogs, of course, to catch up with anyone attempting to flee. If it is night time, you may try to close in even further. Note that while these actions allow you to adjust your approach to the situation, they’re not meant as a replacement for a potential deployment phase, preset formations, or similar.

The battle is done, you’re victorious! Time to report to your employer. Again, several things can happen. Maybe this time, while looking for valuables and burning the rest, your men find some delicate papers about your employer that make for an interesting read. Turns out that this was the reason he wanted to have the caravan burned in the first place. You may choose to burn the papers with the rest, or take them along. As you return to your employer, you can blackmail him with the papers for a large sum of crowns, but at the cost of your relations. Or you can just hand them over. Or keep them for a later time.

And did you let anyone escape alive to tell the tale of your attack? If so, then you better hope they didn’t know who you were, or they didn’t make it, because if the trail leads back to your employer, he probably won’t be happy about being incriminated. And neither will whoever owned that caravan appreciate your involvement.

And that’s a day in a mercenary’s life.