Amalgamation - the Multiplayer Spaceship-Scavenger-Dogfight-Simulator has been released!

We've now released a playable build of the game!

Amalgamation is a multiplayer spaceship shooter where a group of 2-8 players battle each other over LAN in asteroid cavern networks, randomly generated from various hand crafted chambers and tunnels, in rounds of roughly 10 minutes. Each spaceship sports a series of connection points and can be built upon using special modules that can be found throughout the world, or shot off and stolen from other players. 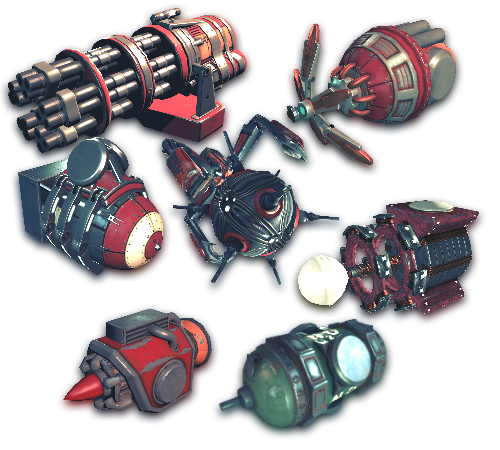 The core concept of Amalgamation is to collect modules. You can find these on the map or you can steal them from other players. See it a little as a combination of the classic game Forsaken and the Coin Runners mode from Mario Kart.

Modules can be shot of when taken damage. Watch out if they catch fire, this means they're about to detach. You get score by collecting modules, so collect as many as you can before the match ends.

Below are some of the modules you can expect to find in the game:

The Pusher module emits a force to all surrounding objects when fired. You can use it to push away modules, other players or oncoming projectiles.

The Tesla gun module zaps nearby opponents, and it is a great weapon in close combat. It slowly deals damage to the opponent's modules.

Why settle for a mini gun when you can have a Mega Gun?! That was our reasoning when adding this long range weapon to the game. Complete with a laser sight, it's the perfect precision weapon for harassing far away opponents.

There are several other modules in the game for you to experiment with.

Collecting is fun, but in order to outshine your opponents you need to plan your constructions as well. Each ship sports four connection points. On these you can attach modules that you've collected. Some modules have extra connection points of their own, which you can use to expand your ship with even more modules. Each of the ship's connection points can then be activated, in turn activating all of the modules in the branches of that connection point.
Oh, and while building, you're still vulnerable to attacks. ;)

If you'd like to see more, we've prepared a couple of videos.
The first video is a recording of a match with 7 players,
and the second video is a demonstration video of all the various gameplay elements.

Planning a LAN party? Well, Amalgamation is the perfect game to warm up with!
The download is about 300 MB and DirectX 11 is required.