Amalgamation is a multiplayer third person space-shooter with some unique gameplay elements. Players can collect modules during the game and attach them onto their ships. Modules can be found throughout the level, but they can also be stolen from other players’ ships when shot off. Modules grant the player extra firepower or defense. The game is played in rounds of roughly 10 minutes, in which the players must brawl and build their way to victory.

This is the first development blog post for our game; Amalgamation!

We’re 8 students at Blekinge Institute of Technology working on this game and we’re roughly 11 weeks into development. We thought it was about time we introduced our game and our ideas. 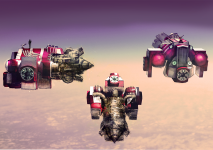 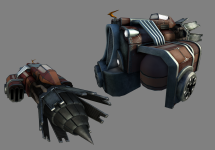 Amalgamation is a multiplayer third person space-shooter with some unique gameplay elements. The game is played in rounds of roughly 10 minutes, in which the players must brawl and build their way to victory.

Players can collect modules during the game and attach them onto their ships. Modules can be found throughout the level, but they can also be stolen from other players’ ships when shot off. Modules grant the player extra firepower or defense.

Building with modules is done in-game, often in the heat of battle. Players who are fast and adaptive with both construction and aviation will have the upper hand.

Our game engine is built from scratch for this project. It utilises a data driven Entity Component system at its core, a deferred DirectX11 rendering pipeline for all the pretty graphics and a powerful in-house physics engine, giving us full control of all things physics. 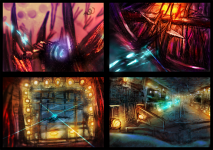 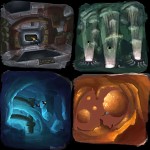 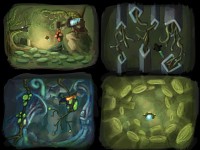 We aim to use state of the art technology in order to bring you solid gameplay as well as stunning graphics. We utilise the advantages of instanced rendering in all stages of our asset production pipeline, letting us create our art assets faster and with a smaller memory footprint, as well as giving us faster rendering- and loading times.

We’re working using the Scrum methodology, in sprints of 2 weeks each. From now on our goal is to do a blog post at the end of each week, detailing accomplishments and plans as well as issues. We’re also going to try to have a steady stream of media uploads here, as well as maybe making some of our in-house prototypes available for download.

As we’re beginning to get the last core parts of the game engine finished we’ve have begun looking on implementing the gameplay logic. Our goal at the end of the week was to have eight players playing a game on a server and getting points for shooting other players and picking up- and using modules. We were also in need of expanding our internal tools to better facilitate for creation of effects such as particles and lighting.

Production on various effects such as shadows and tessellation were started, as well as logic for ship steering/building and ship module actions. A big strength of our data driven engine is that we can specify a lot of parameters in separate text files(maybe a possible mod opportunity?), speeding the process of value tweaking immensely.

3D game assets were produced as well during this week, such as a prison/dungeon environment piece to be used in our level generator as well as a shield- and minigun module for the ship. 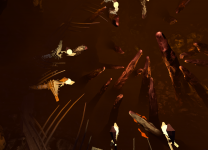 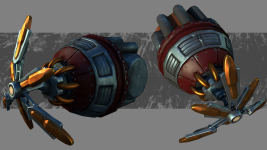 As various features and assets began finding their way into the game, the bug list began growing exponentially and the framerate began dropping, as did the general mood. And thusly, this week, along with all the new features; a series of extra, much needed profiling utilities were implemented in order to measure execution times and eradicate various bottlenecks on both the CPU and GPU.

Working ship modules at the end of the week:
Minigun, mine layer, rocket launcher, shield and general purpose branching modules.

It was a tough week, but we ended on a high note with an Amalgamation multiplayer match in the office.

We’re open to feedback on our game. Right now there’s obviously a lot of stuff that’s a little rough around the edges, and some things have yet to be implemented. But we’d love to hear your initial impressions, and if there’s anything that seems unclear; feel free to ask!