Happy New Year! New Alpha V3 has now been activated which contains many great updates like a new combat targeting system, graphic updates, a brand new tutorial and much more!

Posted by UncagedStudios on Jan 1st, 2016

Alpha V3 has now been uploaded to steam for the testers and those who have preordered and supported the game! Many new features have been added in the transition from Alpha 2 to 3.

The battle scanner has now been fully implemented. When researched the battle scanner will on use scan enemy ships for subsystems to attack. Attacking the enemy shields will reduce their ability to recharge them, targeting the engines reduces the enemy dodge %, and targeting the enemies weapon system will force their weapons to fire slower up to the point where they will be fully disabled.

Targeting these systems does comes with problems as targeting the hull will still produce the most amount of damage so choosing your target at the right moment will greatly affect the course of the battle.

Shadows have now been added to all characters and ship objects that are placed in the rooms. The shadows should mirror what the characters are doing. As always things are still a work in progress but you can see it adds a bit to the overall feel of the game.

A major feature in the original design and heavily requested by fans has now been implemented in this latest push. Crew members will now reflect on their daily life aboard the ship. 600+ barks have now been added.

When a crew member's needs are not being met they will complain about them giving some hints at a quick glance.

The new tutorial system forces the player to learn the UI as well as perform several tasks to learn how to play the game. Not all of the tutorial gives rewards but several pieces do as seen in the screenshot below leading to what can be spent to improve the overall ship. 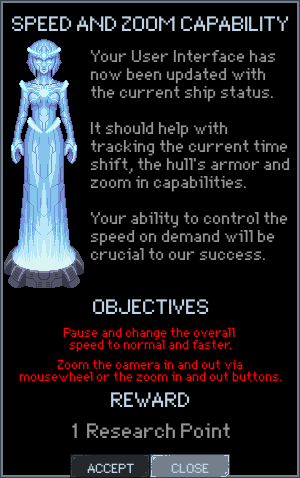 Make sure you click on the Start tracking button and like us on our Facebook page. We would also love to hear your thoughts and opinions at The Sentient. Also follow us on Twitter to see updates immediately and to stay informed. Thank you and gain have a wonderful New Year !