Posted by lostsectortech on May 1st, 2013 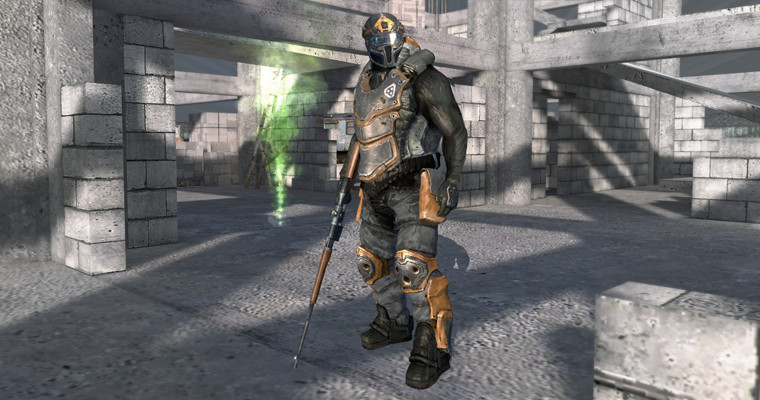 On the picture:
• The new avatar: "Legion" helmet
• New armor paint- Terra Cotta
• Swiss Mask – mask flag of Switzerland have been added to the store.
• Green smoke - team marker (it is described below).

Items rental
It have been improved significantly. The following improvements have been made:
• It is possible to transfer rented items now.
• Rented items don’t bind on use.
• It is possible to extend rental term for the purchase price of a new thing for platinum (npc Hertz). Upgrade is retained!
• Rented items are not removed at the end of the term, but they are taken off and blocked. Overdue items can not be transferred.

Blue grade items binding
• Blue items (not rented) are bound to a player (squad) when equipped on a mercenary. It applies to newly created/dropped items and to the old ones. All the old items are taken off the soldiers and placed in your inventory, so you can decide for yourself whether or not to bind them.
• It is possible to remove the binding for gold (npc Hertz). The better item is, the more expensive the cost of unbinding.
• There are no limits for green grade items.

Improvements of team collaboration
• Ability to set markers on the map (special beacon that is visible to command).
There is a new button ’M’ near the radar. When pressed, the player can establish a market that will be visible to all the allies. Marker can be remover by another click on the button. Each player can put only one marker. Beacons are retained even after reining the battle.
• Ability to show your team the way.
Next to the radar appears new button 'P'. When pressed, allies can watch all of your actions (currently only the path search.

Interface revisions
• The design of the main interface has been updated.
• PVE and joining PVE combat (co-op) windows have been improved.
• The current AP are reduced in real time now as you use the (when running, for example)
• In the pop-up items information the new icon that displays count of bullets spent per shot has appeared.
• Buttons near the radar have pop-up tips now.
• The waiting for players loading window that appears after loading of the map has been improved.

Combat mechanics revisions
• Global optimizations of PVP\PVE battles. It should significantly increase the fps on slower computers.
• Entrance to the arena is now available only for armed mercenaries.
• Now it is possible to fire on the area with any bullet weapon (just hold Shift like you do it with RPG\crossbows, etc.). It is almost a turn-based-third person shooter! =).
• Now there is no absolute prohibition on shooting a closed target, instead of prohibiting displays a yellow warning message.
• Explosions with small range (<3m) hurt units better now.
• Line firing grenade launchers have the correct scatter now and their firing range has been limited.
• Aiming with the RPG\crossbow is much easier now – the "sight" does not prohibit shooting on flat surfaces.
• It is possible to perform the melee attack on the stairs with a high inclination angle.
• The markers that show the place where the enemy was seen, are restored after rejoining the battle now.

Improvements of events\quests.
• Reward for events winning accumulates linearly now. Each subsequent victory is awarded as the first one.
• Spawn logic in events has been improved.
• New basic of combat learning stage is available for beginners in the reworked quest “Radio Jam” now
• New quests are expected in the next update as well as a large number of corrections.