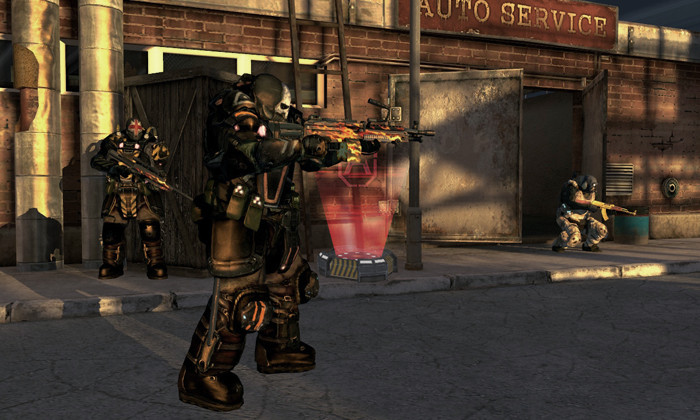 • New location has been added to territory capture mode: Fuel Station. Also Metro Station map was updated (absolutely new map).
• Reward for the capture has been added, now additionally you will get 100 Platinum.

New event: Checkpoints
• Brand new PvP event named Checkpoints has been added. Now the first testing sessions will be held on the game server. We are very interested in your feedback. Test date will be announced!

PvE
Changes in PvE: work on the new PVE quest system was started. The first step is to eliminate the concept of gang`s activity. Now it is possible to start a fight with a gang without running through its territory, and waiting until it will attack. Just go to the gang`s sector and select the quest in the new menu (on the left, called sectors). Now only one quest is available: PVE Combat - a common task for cleaning as it was before and with all the old rules.
Probability of sudden meeting with bandits still exists, but it is reduced to 100 times (like 1% of gang`s activity).
Quests as meetings are available to players with 1 level lower than gang`s level.
The assortment of new quests will be filled in the next updates, and the system will continue to change.

Platinum
New valuable resource has been added to the game: Platinum.
Platinum can be obtained as follows:
• Purchase for Gold, at the rate 1Pl. = 2G. (npc John Smith)
• Exchange Coupon for 250 Platinum (npc mr. Ringo)
• Purchase from other players. (Unlike gold, it can be passed between players).
• Get 100 Platinum as a reward for the capture of one location.
• 50 Platinum award for achieving 10th level (for new players).

Rent
The ability to rent weapons and armor of blue grade has been added. Rent is done for Platinum.
• Npc Hertz that rents (for limited time) weapons and armor of blue grade has been added.
• You can rent for 7 or 30 days. (30 days is more favorable).
• Weapons that were rented for platinum have unique fiery color.
• Unique Ak 47 with gold color is also available for rent for platinum.
• Platinum Upgrade Tool has been added. It is designed to upgrade the rented items only, the chance to upgrade (for +3 or more): 75%.
• Temporary items cannot be passed, disassembled, broken or sold. After the expiration of rent time, they are taken away when loading location but not in combat.

Items
• Each armor and weapon has its unique serial numbers now. It is displayed in the popup window with item`s information. Record numbers of the most valuable for you items. Making a request to moderator regarding to tracking or returning the item you must specify item`s number.
• Now you can equip no more than three units of grenades and equipment on a mercenary. In the rest two slots you can take stimulants, first aid kits and ammo only.
• New mask-flags of Ukraine and Poland are on the sale now. (npc John Smith)
• Unique fiery color for weapons (exists on the rented items only now).

Client stability
This update is one of the most stabilizing in terms of client health. In addition to the mass corrections, a new system of client error tracking was introduced. Now, if a critical error in the client occurs the file crash_log_data.lsc is created in the game folder. Each critical crash causes new log file creation. If you have an error with crash, be sure to message us in new thread "Crashes" and attach log file of error to the message.