We have quite a bit of new content: Like 8, Alpha 9 is another lore-heavy release, and you'll be able to learn even more about the world and its inhabitants, in many cases straight from those inhabitants themselves. At the same time you'll have the option to be a part of some big events. (Actually, there has been one similarly major event accessible for many versions now, but still no one has discovered it :P)

While much of the new content is found in a particular part of the game, Alpha 9 includes something for everyone (even those who can't yet find or reach that area ;) ) in the form of yet more UI enhancements, some significant improvements to machine usability, and changes to hover/flight propulsion stats.

As usual, most of the new stuff I can't spoil, but below is a sample of some of the showable features:

Autosort your entire parts list by subtype at the press of a button. 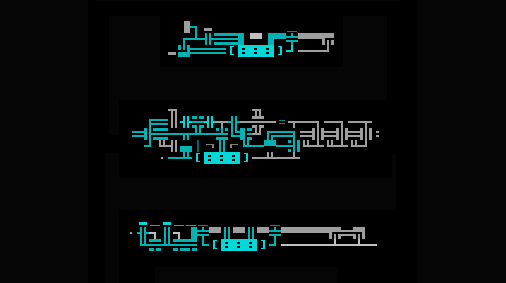 A new class of special weapons to discover, with a new damage type. Samples above. 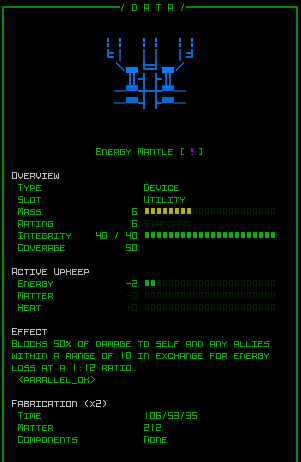 at the bottom, and an increasing build speed for higher-tier Fabricators.

(Also, the required matter comes from the system now, not you.)

Nearby explosions shake windows individually, with the effect varying by power and distance.

(The true appearance I haven't been able to capture in a gif--recording FPS not high enough,

Building friends at a Fabricator is much easier.

Bump into disrupted or rebooting allies to instantly reactivate them.

The "route" section of the score sheet now also records exits discovered in each area. Those that lead to

an unknown destination appear in brackets, and those you approached are marked with *

Insufficient resources (matter/energy) for any action will now

include exactly how much you need directly in the message itself.

When accessed via keyboard, Intel and Order modes now show they are active with an indicator

and aren't sure why you can't enter commands elsewhere).