Cogmind is @ Alpha 8, a lore- and plot-heavy release. Make new friends. Or enemies, your choice :D

The latest and greatest Cogmind is now Alpha 8!

Alpha 8 is the first very lore-heavy release. There's been plenty of lore available from terminals before, and a few NPC encounters that shed some light on things, but now we have a new pair of maps dedicated to learning more about what has and is happening in the world. Both of them are found in the caves, meaning all but one of the four primary cave branches are now complete (although there will be one or more even deeper caves in the future).

-1/Access has been barren too long, so now there are more machines to entertain you, some of them very asciiplody. 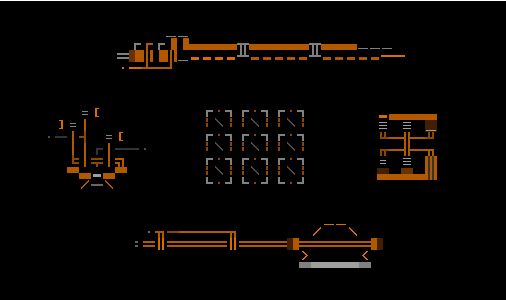 A couple dozen new parts, the art for which you can see a few samples of here.

If you can find drones equipped with terrain scanning gear, they'll share that intel with you, too.

Hold the ` key to brighten and color known areas outside FOV.

Some NPCs require bump-to-talk, and if they have unspoken dialogue when you see them they'll be marked with a blinking '?' (in addition to the regular indicators--a '?' in the scan window, and a glowing "(transmission)" in their info window).

AI initialization is now optimized to avoid the short pause during the first turns in large maps like Factory. Here you can see the AIs gradually waking up over the first few turns on the map, beginning with those closest to your starting position.

(As usual, I'm not spoiling the new maps or better content--you can discover those on your own!)

Alpha 9, due out next month, will include the last major cave map, more plot elements, and some revamped machine mechanics.