Welcome back dear backers and non backers, This will be … *drum roll*… our final Alpha update! How time flies ^_^# This also means starting from June 1st we will open up the builds to all backers who pledged for the “beta” tier or above. But more on that below, first let’s have a quick look at the latest stuff!

This will be … *drum roll*… our final Alpha update! How time flies ^_^# This also means starting from June 1st we will open up the builds to all backers who pledged for the “beta” tier or above. But more on that below, first let’s have a quick look at the latest stuff:

The Ministry of Rehabilitation

The Ministry of Rehabilitation is where dissidents and political opponents are given a fair “trial” and processed for rehabilitation as productive elements of society.

The level is still work-in-progress, most notably the boss is lacking, but you can already get a taste for the place and the challenges that await you! As all the other levels, it is currently freely accessible through an elevator in Amor’s Den, so you don’t need to go through the entire game to test it out (yet!). 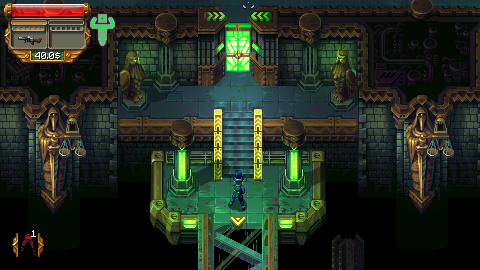 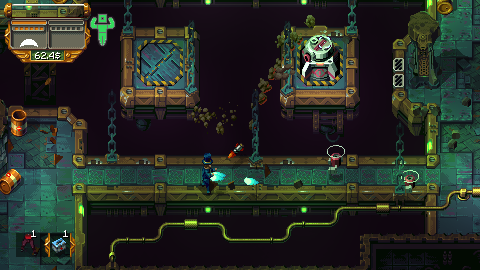 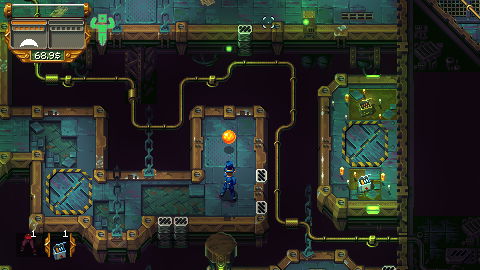 D-pad and mouse controls for terminals

You can now use the D-pad in addition to the left thumb-stick to navigate terminals. If you play with mouse / keyboard, the terminals are now exclusively navigated using the mouse - old school be damned ^_^#

The shop section of terminals also got a make-over, with a friendlier UI which now supports scrolling up / down in the list of items, as well as some on-screen prompts to remind you of the controls.

Additionally missing body parts are now highlighted in the shop so you can figure out what you need at a glance.

Terminals now support paging - most useful in the news section, so backers who pledged for the “news writer” or “easter-eggs” add-ons are not too limited in their content.

You can now take screenshots by pressing the “9” key. The screenshots are currently saved in the root folder of the build.

You can now buy “waterproof pants” in one of the shops in Amor’s Den, which cancel out the damage you normally take when you step into sewer water.

Similarly you can now buy “party shots” (working name ^_^#) in the black market. There are currently three types : health, speed, and melee damage. Each shot will boost the corresponding stat for 10 seconds (the plan is to add more types and durations during beta).

There is a new tool available in shops (or as the starting tool of the scientist - more on this below) called the “time bender” (again - working name ^_^#).

As the name implies, this tool will let you “bend time” in your favor: while everything slows down around you, you can still dash at regular speed and your firing rate is only partially affected - making it easier to dash around bullets in slow-mo while dishing out some sweet sweet justice.

Starting items for each character

As evidenced in the character selection screen, each character now starts with a specific “tool” in addition to his / her primary weapon:

The spy - also coming up soon - will obviously start with the coveted hacking tool ^_^.

Ammo clips now accurately account for how many “bullets” are left in them, which means reloading a weapon when the current clip is not completely empty yet will not consume the next clip entirely anymore - instead it just transfers the required amount of “bullets” from the ammo clip into your weapon.

Similarly, the amount of clips left in each ammo pack is now displayed in the “inventory UI” at the bottom of the screen. 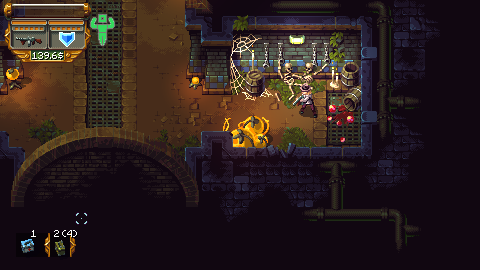 So for example in this case, I have 2 ammo packs in my inventory, and the current pack has 4 clips left in it.

The mini-map behavior has been refined, with only the beggar starting each level with a full map as part of his perks (pictured on the right), while the other characters only see parts of the map which have been explored (pictured on the left)

We also fixed a ton of bugs, quirks, and smaller code-related issues which would be meaningless to most backers, however a couple stand out in particular:

If you play in windowed mode, the mouse is now locked to the window to avoid accidentally clicking outside and losing focus (and getting killed!).

We added support for a variety of gamepads - however due to obvious logistical reasons we are unable to test most of them, so if you own one the gamepads listed below and are experiencing problems getting it to work with Tower, please do get in touch ^_^!

So what are the next steps then?

Well as mentioned above, on (or around ^_^#) June 1st we will open up the build to all “beta backers”. This means most of the planned features are in - though not all of them polished - and we will be focusing on fixing bugs, and adding content and polish.

We still have 2 more levels planned (the bio-lab and the upper floors), 3 bosses are missing, 2 more playable characters are on the way (the spy and the associated hacking mechanic, and the special backer character), and of course NPCs and dialogues, cut-scenes, tying the levels together, and processing backer feedback from the beta :)

We will also start integrating backer-content (the statues, the Easter eggs, etc.) and get cracking on the Linux and Amiga ports.

Until then we sincerely hope Alpha backers will enjoy this build!

How are other players affected when one player uses the Time Bender gun?

Currently both players are affected in the same way, so the Time Bender also functions as a "group buff" : both players can still dash around at regular speeds while everything else slows down :)

Nice update! I love the action, debris and graphics! You are doing a great job!
I can't wait to be The Beggar!
Thanks for planning a Linux version!