Hi everyone, the summer is over and we are back with our first experimental build which includes: Build module degrade/repair, Stick and Branch pack, Reworked spoil system, Multi-equip system, separated config data and more.

Posted by gamers4gamersteam on Sep 5th, 2020 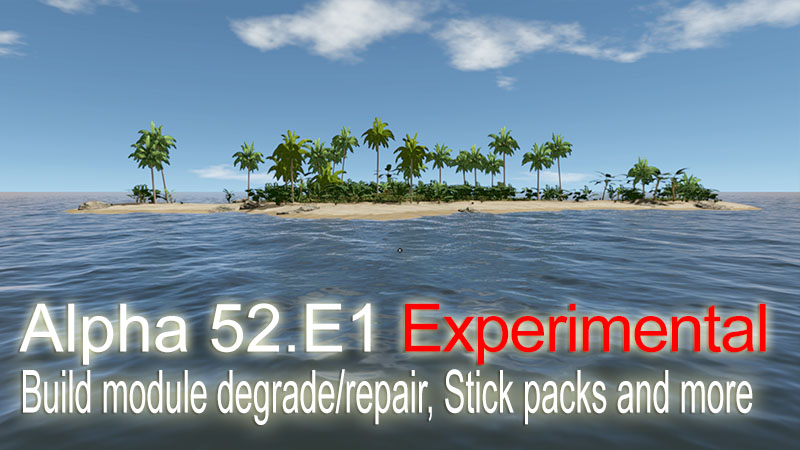 the summer is over and we are back with our first experimental build which includes: Build module degrade/repair, Stick and Branch pack, Reworked spoil system, Multi-equip system, separated config data and more.

Development of Escape the Pacific is now at a point where more advanced and complex game mechanics and features need more time to work on. For those of you who like to try out the new, not fully tested additions as they are being developed we like to give you the chance to look into them first hand - by introducing the new experimental builds! The stable/default game builds will receive those experimental updates after those were tested and confirmed over time with and thanks to the community.

To switch between stable and experimental game builds make sure game properties in your Steam client are set to either "Experimental" or "None" (which is the stable branch).

The Experimental builds have their own save data separated from the Stable/Default builds save data so it is possible to switch between the branches flawlessly.
The game Options data has been separated from the ingame save data and besides it solves some issues it also give us more freedom in changing/adding new options to the game system.

The build module Degrade mechanic moves the game play to a more realistic level. The system calculates the Wind direction, wind speed and based on whether the build module is hit by direct wind or is shielded by some other module with Storm property it degrades the build module quality accordingly. The Degrade system actually does simple one point simulations and takes into consideration only the Wind, but in future updates the mechanic will use more precise simulations and will calculate also the Rain and Sun impact. 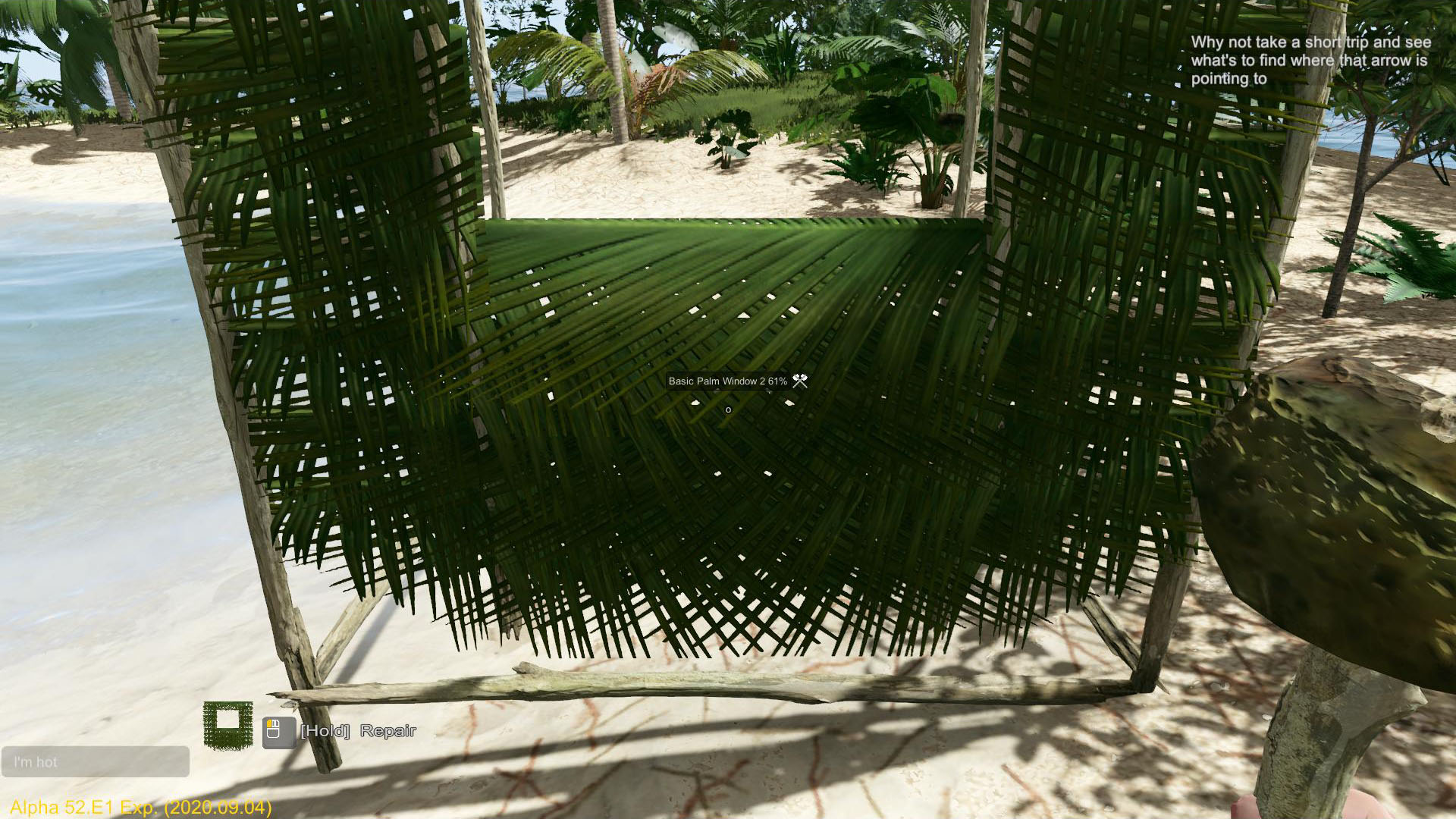 The damaged modules can now be repaired by Hammer. Doing that the player can ensure he gets the protection the module is offering based on its Wind/Rain/Sun properties. The better built and the higher quality the Hammer is the faster the repair process will be. The process of repairing increases the players Repair skill which is affecting the repairing process itself. There is a new Repair achievement too.

Another new feature is the universal Stick/Branch Pack. It is a big help in transportation of Sticks/Branches that aren't fitting in the Backpack. They are universal, because after crafting them from fixed amount of sticks it is possible to expand them to an extent by adding additional sticks or get sticks from them until the pack is gone. 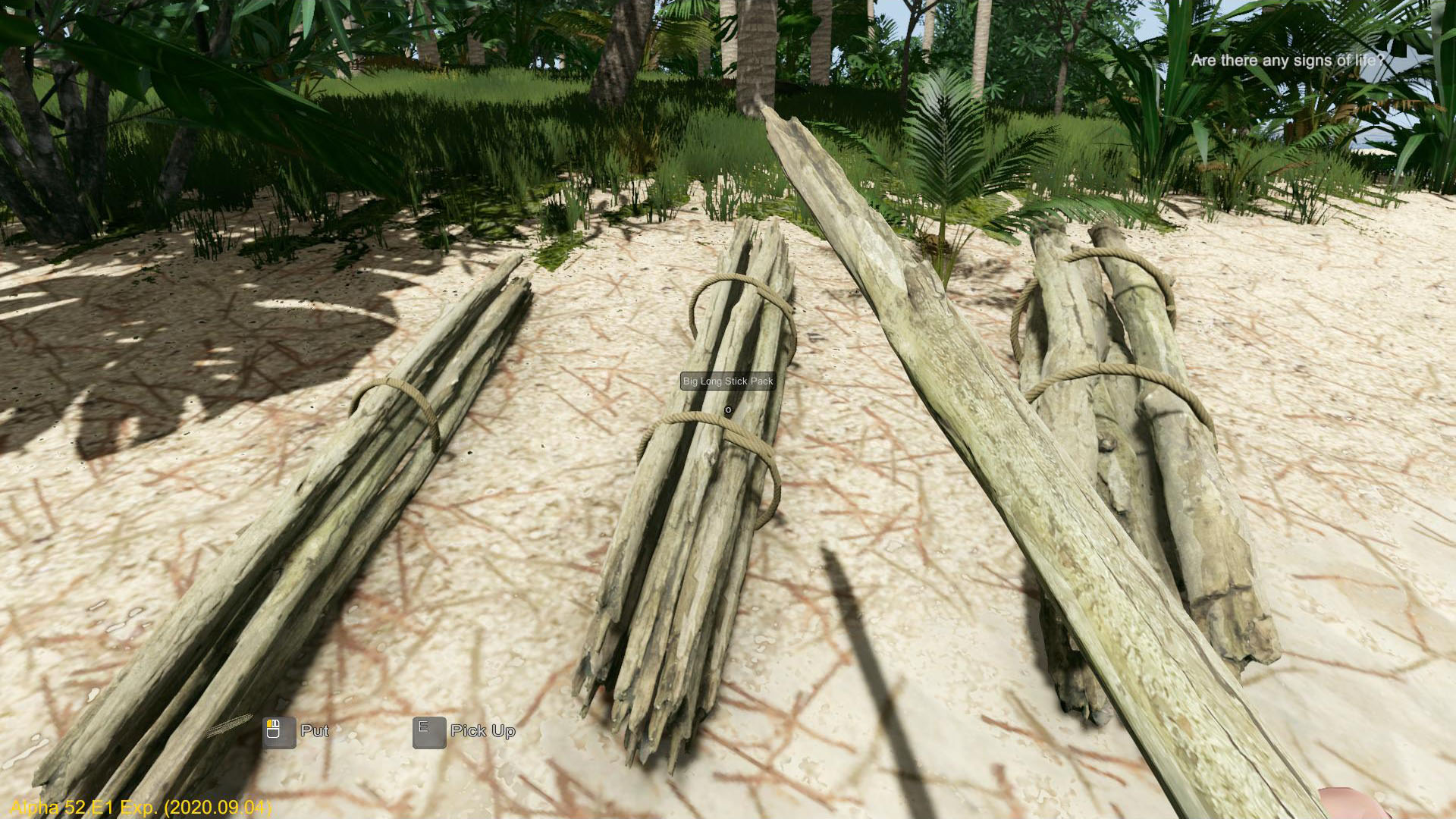 In case it is not possible to craft any Stick Pack the player can take into his hands multiple Sticks or Branches and help himself to ease the transportation. 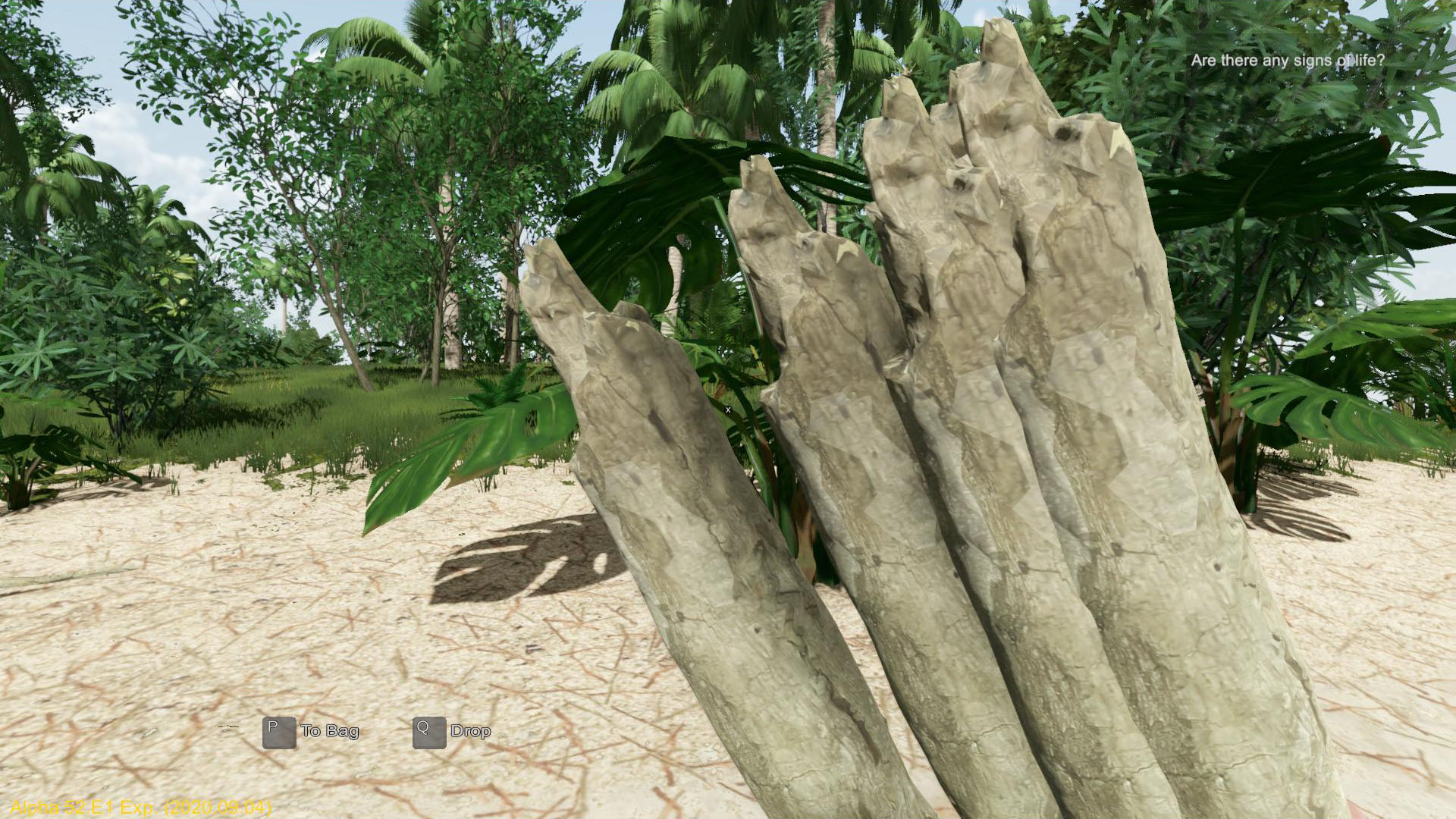 The Spoil system was reworked and it changes the way the player used to survive in earlier versions. The more spoiled the consumed liquid or meal is the more damage it does to the players health. The spoiled liquid or meal don't lose its thirst or hunger values completely so it is not needed to drink 30 litre of half spoiled water to ease the thirst.

The ability to Open/Close door/window when Equipped makes the gameplay more comfortable and the additional saved data in case of attaching an object to a raft ensures more stable attaching after load.

There are a couple of other internal engine changes that are laying a good base for future mechanics and features, for example the aging info for all objects and custom hand animations for equip/drop ... etc.

Fixes:
01. Fixed: Alpha Screen text always in English
02. Fixed: Not displaying of Detach hotkey in ActionBar when Aiming Door/Window with Hammer in hand
03 Fixed: Doors/Windows was possible to equip in hands (not intended)
04. Fixed: Not effecting Rainwater in WaterHolders after they had oil or something before water
05. Fixed: Not lowering thirst when drinking rainwater
06. Fixed: Incorrect Spoiled Energy values for all Liquids
07. Fixed: Sometimes incorrect spoil- and dry-up-times for all WaterHolder objects
08. Fixed: Incorrect HitPoint data loaded for sailing objects (rudder, sail, mast, ...)
09. Fixed: Incorrect HitPoint data loaded for for floatable objects (canoe, raft , ...)

For the next update we plan to work on Global map and the Multi Cluster system. The additional plans include also the Old Telescope, Fog Catcher, Plank Build modules, Spear, Smoker, Dolphins, Simple Quests, Building modules aging ... We will work also on solving the new issues and we will recheck some older issues too. Other new features will be added as implementing the planned features and fixing issues will allow us to.