Hi everyone, the new Escape the Pacific version 'Alpha 33' is now available. For this update we were mainly focusing on adding realistic Lightning & Thunder moving along with the center of the Storm. There is a new collectible Bandage used for crafting and a new Sail Mast with Wind Indicator. There are new Building modules with different Sun/wind/rain shielding properties. A couple of gameplay improvements were added and many issues were fixed too. 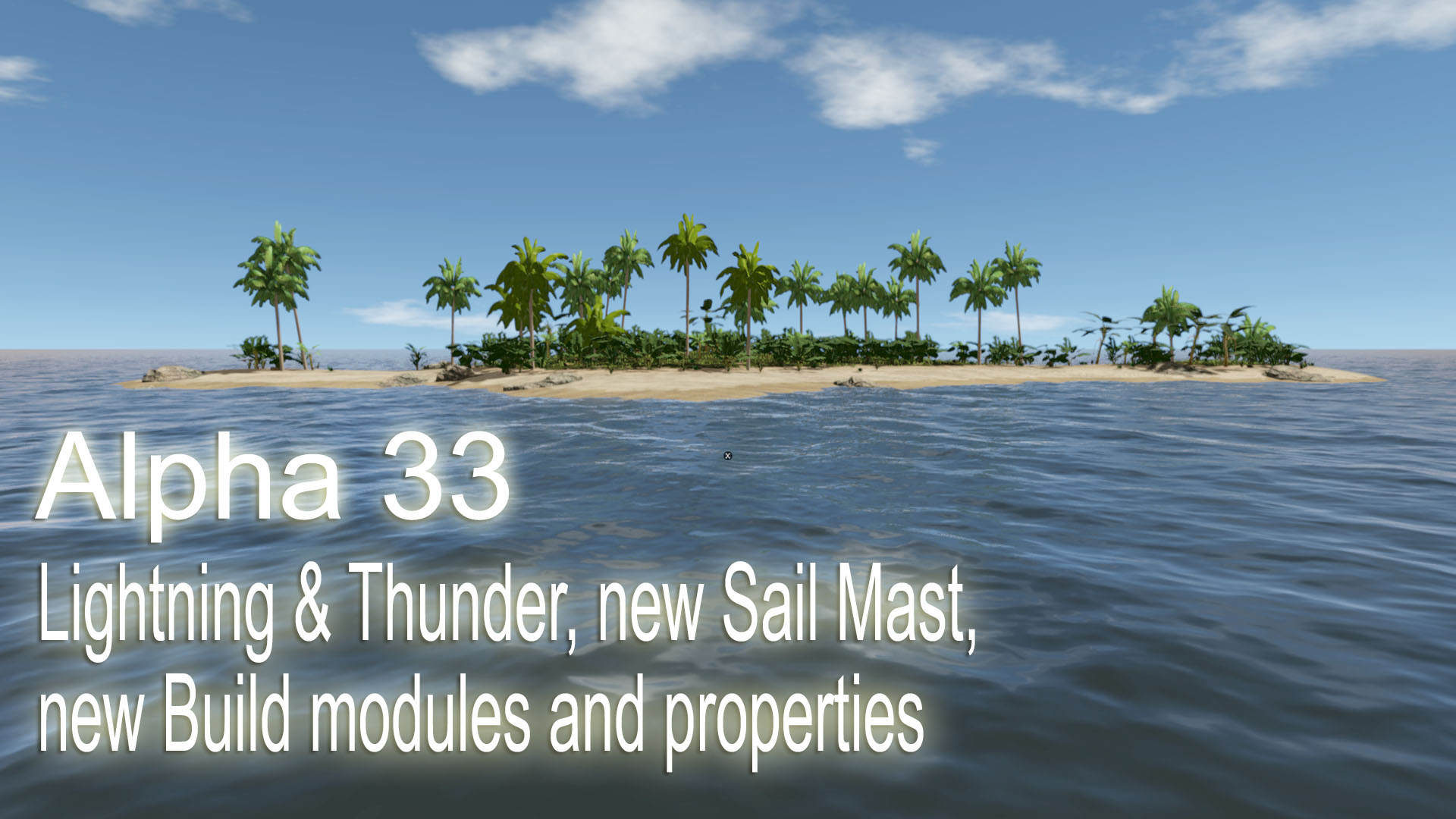 the new Escape the Pacific version 'Alpha 33' is now available.

For this update we were mainly focusing on adding realistic Lightning & Thunder moving along with the center of the Storm. There is a new collectible Bandage used for crafting and a new Sail Mast with Wind Indicator. There are new Building modules with different Sun/wind/rain shielding properties. A couple of gameplay improvements were added and many issues were fixed too.

The most interesting and unique new feature is the Lightning & Thunder effect which is a very nice and realistic add-on to our Storm mechanic. The Lightning system is travelling around with the center of the Storm and the Thunders are still heard a while after storms moved on. Hearing a silent Thunder indicates that a Storm is forming in far distance from that certain direction.

There is a new collectible Bandage which can be used for crafting the 'Wind Indicator' and a new 'Sail Mast with Wind Indicator' which offers big help in setting Sails correctly based on the actual wind direction. Bandages can be found in some crates for now, later it will be possible to craft them from various resources.

This update also provides some gameplay improvements. Oil liquid has now a yellow color and all of the Water holder objects have got 2-3 times more precise indication of the water level inside: for example blue/yellow planes inside the Coconut pot for different water levels. The object dragging mechanic has also been updated and from now on objects aren't falling through the Raft base modules when they are dragged. Water and Clouds quality can now be defined in the Options menu.

01. Fixed: Objects do not fall through the Raft base when they are dragged
02. Fixed: Sometimes not able to drink from fresh cut coconuts
03. Fixed: Non stopping raining in Main menu after regenerating the World
04. Fixed: Saving/Loading Crafted but not yet attached Sails do not roll up after Loading (caused almost impossible attaching)
05. Fixed: Water holder objects became not "drinkable" anymore after using the "Eat" button in inventory
06. Fixed: Water level not changed in Water holders after using the "Drink" button in Inventory
07. Fixed: Coconut and Banana leaves in Sails overlapping and flickering
08. Fixed: Sail, Sail Mast and Rudder not rotating to their default orientation
09. Fixed: Rain droplets visible only above head in strong winds
10. Fixed: Bad shadow level calculation during clear sky - overcast transition
11. Fixed: Missing bananas from trees when travelling to far islands, save, load and returning
12. Fixed: 'Wake up' button always disabled in Sleep screen
13. Fixed: 'Sleep until SunSet' button sometimes not working correctly
14. Fixed: 'Sleep until SunRise' button sometimes not working correctly
15. Fixed: Ocean in pre-sleep colors blinked after Sleep screen was closed
16. Fixed: Water holders shielded each other from rain when placed side by side
17. Fixed: Mixing fresh and spoiled water caused bad final spoiled value
18. Fixed: No shadows in Main menu when exiting a raining game
19. Fixed: 'Jumpy' transition between clear sky and overcast
20. Fixed: Meat taken from Meal Drier when dropped falls through terrain

We will continue to concentrate more on improving gameplay and on adding more content to make our game more entertaining and longer playable. The additional plans include also Fruit ripening, Fruit regrowing, Soup, Cooking in Coconut pots, Door, Window, Spear, Smoker, Salt, Candle-lantern, Torch, Ship wrecks, Dolphins, Sharks ... We will work also on solving the new issues and we will recheck some older issues too. Other new features will be added as implementing the planned features and fixing issues will allow us to.