Read on for what's new in our twelfth monthly alpha release! 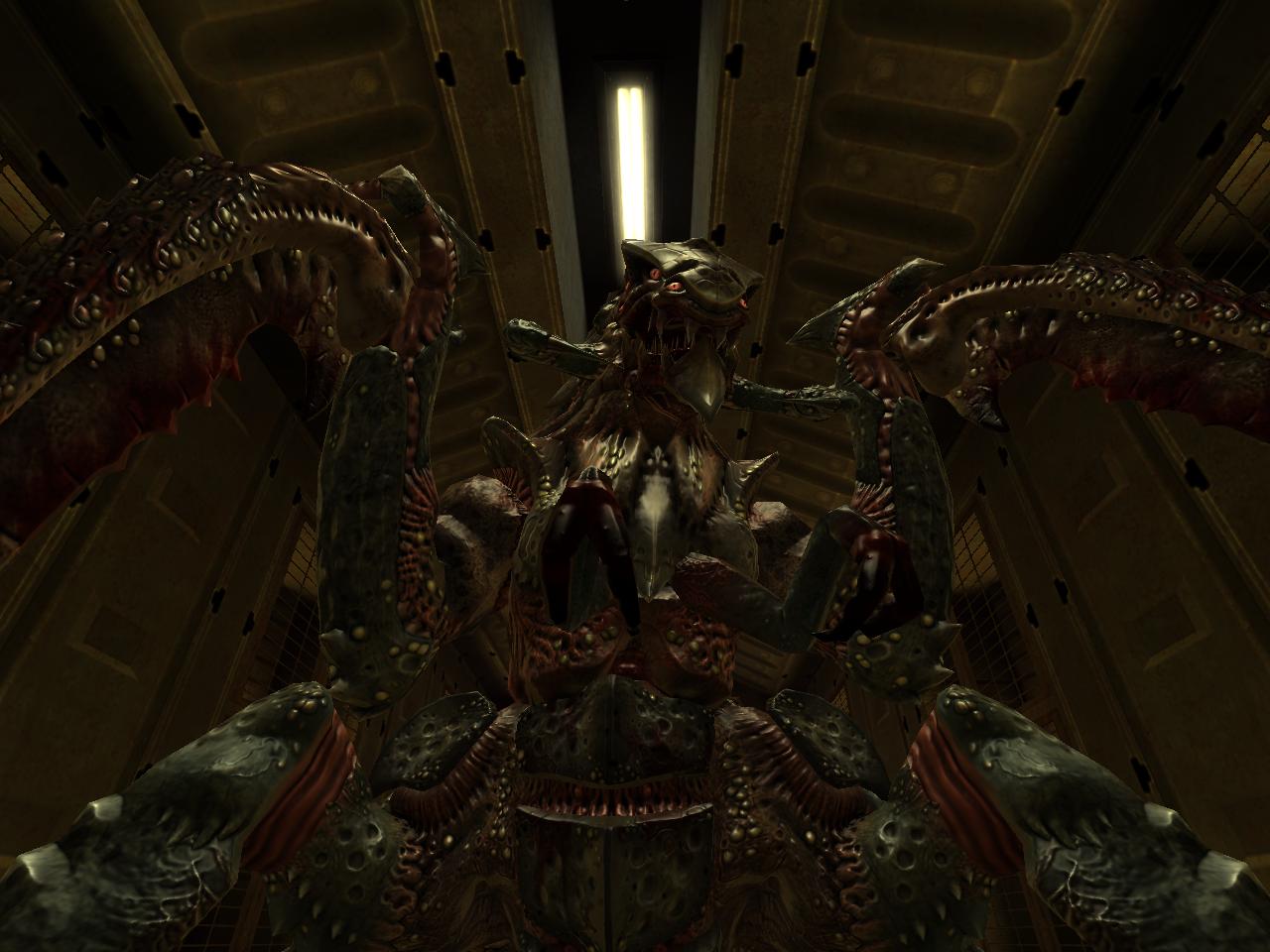 Otherwise known as back lighting, it's another source of lighting on our models. All models benefit from it, so while our new models will look great, even the old placeholder models will look better for the meantime. With rim lighting enabled, ambient light will affect the edges of the model as well, highlighting details and serving to make the model stand out. Naturally, only available on the GL3 renderer, so make sure to use that if you'd like to try it out.

Yet another effect we've added this release, motion blur creates a blur effect when you move fast enough, as one would expect. This is most prominent with the dragoon pounce and the marauder's wall-jumping, but you can also witness it when moving exceedingly fast for any reason, including falling from great heights. Again, you'll need to be running the GL3 renderer to use this. The blur effect can be adjusted through the cvars cg_motionblur and cg_motionblurMinSpeed.

The bot behavior has been redone entirely, and now functions off a behavior tree system. Most importantly, these behavior trees allow for a variety of bot behaviors to be programmed, which is a significant improvement over the old, rigid system. It is also possible for server owners to utilize their own bot behaviors, and when the code matures further, we'll provide tutorials on how to do so. You can play around with the new bots on our development server. Added bonus: you don't need to download navmeshes anymore!

While it's very much in an early state, you can now test out our resources implementation on our development server. This is a major departure from the gameplay of Tremulous, and will be part of the direction that we are taking the game in. We're extremely eager to hear feedback on it, so please, feel free to make threads regarding your observations. Essentially, the resources system changes the way that build points work. Rather than starting out with a certain amount, you must now build resource generation structures: the leech for the alien team, and the drill for the human team. Respectively, they use the hovel and repeater as placeholder models. Try it out!

We've been aware of the shortcomings of the installer for a while now, and we've fixed some of the glaring issues in this release. The installer will now check your data directories while downloading files, and it won't accidentally redownload some of the files you already have. Also, it will use md5sums to ensure that the downloaded files aren't corrupted for any reason, which sometimes happens with unsteady connections. Old vm files will be removed if they are present, which has been a source of annoyance in the past.

The menu has been reorganized, with options in more sensible places than before. Additionally, many of the old options that were inherited and didn't quite do anything noticeable (or at all) have been removed, and have now been replaced with functional options that should have visible effects. Also, the console code has been significantly overhauled, and while much of it has been code-side, you should notice a much neater appearance this release, complete with a new fade effect to replace the old drop-down one.

You no longer need to use cg_alienConfig, cg_humanConfig, or cg_spectatorConfig for setting configuration files with team-specific binds. While you can still use them, we now have a teambinds command. Simply use /teambind, with the command being bound to a specific team. If you don't specify a team when using the command, then it will simply function like the old /bind command. Now you should be able to distribute all of your binds together in a single file.

We've applied normal and spec maps to all the new first-person guns, so they'll respond better to ambient lighting and should generally look a bit better than before. Also, we've fixed the lighting on the creep texture, so it will no longer appear fully bright even in dark rooms. Bots now have their own icons to signify that they are your computer-controlled friends. Lastly, the jetpack and battery pack placeholder models should show up on the human again.

This has been an enormously active month for the engine, with a whole load of commit activity. It's somewhat hard to summarize the huge amount of work done, but here are some highlights. The shotgun now fires in a circular spread instead of a rectangular one, better matching the firing effect and common sense, while the flamethrower is more effective at close ranges and the flame puffs will damage things adjacent to them. Some of the annoying bugs like the corpsenum bug are gone, so you won't find yourself disconnected after a game. Servers will display the amount of bots they have separately from the number of real players. Lastly, if you use the team overlay, you will now be able to see the credits or evolution points of your teammates.