Just an update on the development process of Alas Mortis. Things are getting underway! Woo-hoo! Basically everything we want you to know about the Demon character at the moment.

First off, I'd like to thank everyone for supporting this project and showing it some minor interest for the moment. I haven't revealed much at all, but figured I should so the game can get some more traffic, and pretty much let everyone know what it's all about. Apologies for the horrid imagery (currently getting someone to design better logos, and banners so bear with me).
---
Alas Mortis is a horror game, that's multiplayer. Two teams. 9 players play as everyday citizens of a small town trying to survive on a variety of maps (Farmland, Abandoned Hospital) with two maps mentioned coming out in the early access part of the game, with more levels coming out during development. The other team consists of one player who plays as a demon who's goal is to hunt down the 9 players within the time limit using a variety of abilities, and weapons at his disposal. The demon is more-so a humanoid bat creature and will have the ability to fly around said maps. The human players have no weapons, and must hide to survive. Think of it as a horrific, gruesome, terrifying game of hide & seek.
It's being made in UDK, and hopefully will be released on Steam. It's going to be free-to-play so anyone can pick up the game and play it. This also means all patches, and updates (including new maps, gametypes, etc) will be free to download, and won't cost users any money, however Skin Packs may be released that players will be able to purchase the will include a variety of skins for the human characters at a low price ($1.99), however this is still debatable, and all skins may be included in the game for unlock.

The game will be more-so my learning project, and achieving a better understanding of the how the engine works in preparation for a project I'll be doing in the future with a close friend, and the concept of that game shall remain a mystery, but it will be a horror experience we haven't had before. Fun, fun.
--- 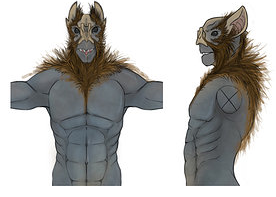 This is the Demon, and this is how he'll look in-game. The idea for the demonoid is more of a bat-like appearance, and he'll have wings that will burst from his back and allow him to fly around the maps and scout out players, and hide in high places. The Demon will also have a variety of abilities, and weapons at his disposal that he can use to dispose of the human players. The Demon cannot be killed, and players must hide from him in a twisted, and horrifying game of 'Hide and Seek', but more game-modes will be added to the game. 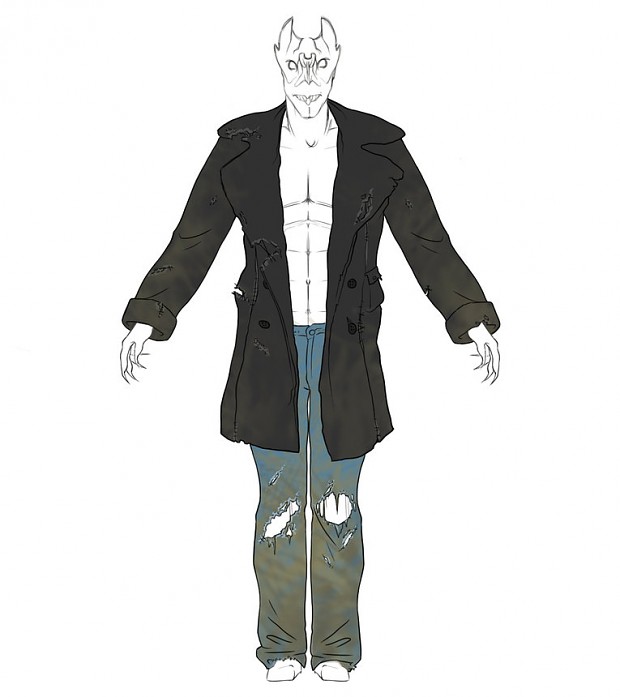 The Demon will also be clothed. This is so the Demon can hide amongst humanity easier, and avoid being detected. Of course, his bat-like head doesn't aid the situation. This is his modern-day get up with more "skins" to be unlocked while leveling up your Demon character. Thus following a backstory that has seen the Demon in various eras in time, and has lived for thousands, upon thousands of years. Some of these skins will come from the Dark Ages, WW2, and more, with each costume set reflecting that era in some way.
---
However, the Demon isn't just some bat-like looking thing in a black coat. He has weapons and abilities that will aid him in his hunt. The better you play as a Demon & level up, the more weapons you can unlock for him, and use to slay the human players. The first few weapons you'll have at your disposal are as follows:

"Sanguis" (Blood)
Sanguis is a deadly, and powerful spear. It can pin corpses to solid objects and is a one hit kill. After throwing this weapon, the Demon must retrieve it. There is a human eye embedded into the blade, and is thought to be one of the Demon's kills from long ago. (Ignore my horrible concept art I drew. I'm getting a better artist to redraw the weapon concepts) 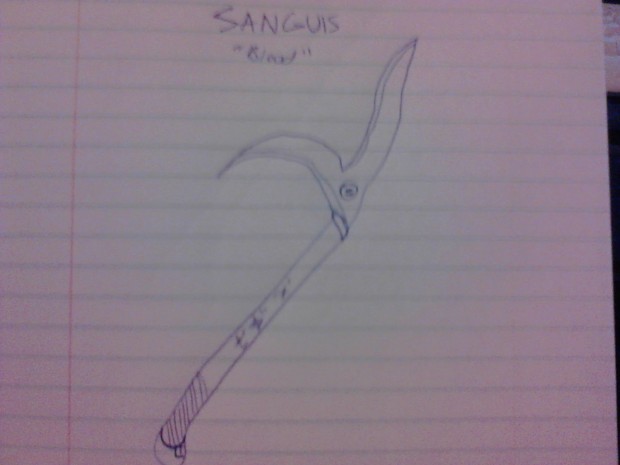 "Sidus" (Star)
Sidus is a large, grotesque looking throwing star that can cut people in half. It can go through multiple targets at a time, and also must be retrieved after throwing. I thought about making it like a boomerang and returning to the player after being thrown. So, if people would like it to function more like a boomerang let me know!

"Claws"
Of course, you might have to get up close & personal with your prey. This is the Demon's basic melee attack, and will take two hits to dispatch a human player. If he sneaks up behind and stealth attacks a player it registers as a one-hit kill, and shows a short cinematic of him twisting their head all the way around.

"Cerebrum" (Skull)
Cerebrum is a human skull engulfed in green flames. It can only be used once per match. This weapon engulfs human players on fire, and if an engulfed player bumps into another, the fire will spread to the other victim. This weapon will also play a apart in the Possession mode which I'll explain within the coming months or so.

---
The Demon will also have a host of abilities he can use to aid in the wiping out of the humans. Note: These abilities are always subject to change if they're over-powered, or just don't work as thought:

Flight
The Demon can fly around the maps, and survey areas before attacking. When in Flight he can reach high points on the maps, and prepare for making ambush attacks. If the Flight system works as planned we will add the ability for the Demon to pick up players in his claws, and drop them from a very deadly height.

Scaling
The Demon can walk on any surface. Walls, ceilings, etc. He is a bat-like humanoid after-all, and this could work perfectly for stealth-based attacks. Dropping down from the ceiling behind a player and snapping their neck.

Scent Mode
For a limited amount of time the Demon can see through walls and find where players are hiding, similar to how zombie players in Left 4 Dead can see where the human players are at on the level. This may be removed, and a new detection system will be added. All depends on how you guys think of this 'Scent' concept.
---
So, hopefully this draws some attention. I don't want to reveal too much right away!